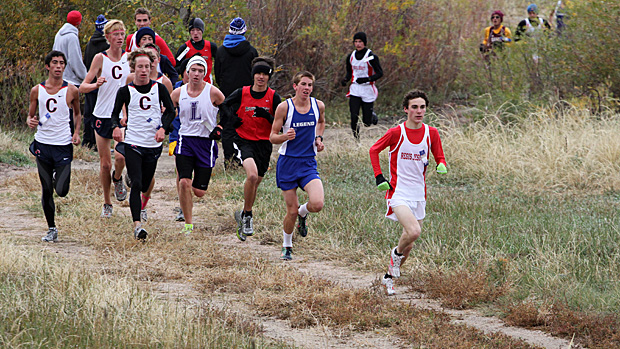 By the standards and measures of previous regions, this one is massive--at least in terms of the count of schools. And that will necessitate a bit briefer of some of the teams.

But, as you might expect with this many teams, there is a great deal of history involved. Let's take a look at some of that history.

Cherry Creek and Smoky Hill probably need no introduction to seasoned fans of high school cross country in Colorado, but some of the other programs may not be as familiar.

Not surprisingly, Creek and Smoky lead the tally of state titles with eight and four state titles, respectively. They've also had more than their share of individual state champions, runners like Megan and Katelyn Kaltenbach, Meg Schissler, Brent Vaughn, Jordyn Colter, and Walter Schafer bubble to the surface in that conversation.

Highlands Ranch owns two state titles from earlier years of the school when the community wasn't divided up into as many attendance areas. Regis Jesuit snagged their boys title in 2009. Going back to the 1960s, Abraham Lincoln produced four state titles. Dakota Ridge won two team titles in the last decade plus got a couple of individual titles from Evan Appel and Alexa Rogers. Bear Creek owns back-to-back state titles from the 90s. Mountain Vista added themselves to the list of state title winners last fall.

There are several solid teams in this grouping still in search of their first state title. Arapahoe, in particular, has been close on numerous occasions but has never come away with the big prize.

Historically, Cherry Creek has dominated cross country within their own school district except for a period of time about 10 years ago when Smoky Hill's girls were the buzz of the state. Right now, Cherry Creek is once again in a good spot, but Grandview has also shown some indicators of promise in recent seasons.

D'Evelyn won three consecutive state titles in 3A from 2001 to 2003. A newspaper quote to the effect that "anyone who wants to win the state title will have to go through us" spoken by a prominent member of the defending state champions provided all the spark D'Evelyn needed to get that string going. They were more or less untouchable in 3A until enrollment on West Nassau Avenue encroached over the 4A boundary. They have been a solid 4A program since that time but have never regained their former glory. John McGuire and Kevin Williams produced several individual state titles for the Jaguars and left us all wondering about what manner of magical powers coach Micah Porter possessed.

Mullen owns six cross country state titles, all from the 1990s. If you weren't following the running sports back then, you can neatly summarize that decade as the one where Mullen dominated just about everything in both cross country and track and field. For the record, Mullen went from a school that didn't even have a girls team in the state meet in 1993 to girls state champions in 1994. They also claimed three of the top four 5A place that year, led by Carrie Messner in first. Colleen Blair would win another individual title in 1998, and the Mustangs would sweep the team titles in 1999.

Denver South has spread its three state titles out over a couple of generations, with the first coming in 1952 and the most recent in 2004. The neighborhood underwent a lot of changes over those 52 years, but cross country remained a solid sport for the Rebels.

There are no state titles to be had among the other 4A schools of the region, though Ponderosa's Eli Hemming raced to an individual title last fall.

The 3A schools of the region are cut from a variety of cloths. Colorado Academy has been close to a state title a couple of times in recent years and is probably rightly regarded as the strongest program of the group. Some of the other programs have been around long enough to have passed through a few highs and lows, but at the moment each of these programs might be characterized as developing programs. Those schools would include Kent Denver, Sheridan, Ridge View Academy, and St. Mary's Academy.

Go back to the turn of the millennium and Denver Christian was dominating 3A cross country. Both the boys and girls won back-to-back state titles under coach Dale Schoolmeester. But the amazing energy of those years eventually dissipated. Denver Christian is once again an improving team, but in a smaller (2A) classification. The opening of Valor Christian took a substantial bite out of DC's enrollment.

SkyView Academy is the newest of the south Denver metro programs. They've been running cross country for a couple of years now, but only this year will they be full-fledged CHSAA members. The impact of their presence will be felt more sooner than later.

There are so many invitationals from this region that I'm giving up on the notion of providing an exhaustive summary. I am, however, hoping I catch most of them in what follows.

Big ones? Well, that would definitely include the Arapahoe Warrior Invitational at DeKoevend Park on opening weekend and the Dave Sanders Invitational at Clement Park on weekend #5. Both are among the state's highest intensity meets. The Arapahoe Warrior meet features a water crossing section that has produced a broken bone or two over the years, but is otherwise pretty much what you'd expect for a course in a large suburban park. Dave Sanders has no water crossings (unless it's been raining really heavily right up until meet time) and also resembles what you might expect from a large suburban park venue. It's the competition that makes these meets what they are.

The second-most bucolic meet of the region is the Legend Cross Fest at the Colorado Horse Park Equestrian Course in Parker. Fortunately, the horses aren't on the course at the same time as the cross country runners. It's not difficult to fathom which would win in a collision. You may, however, want to check the long-term weather forecast before signing up for this meet--it has a recent history of cold, snow, and wind.

The most bucolic course? Well, that would have to be the Kiowa Invitational at Blue Feather Ranch. This one typically goes on a weekday somewhere about three weeks into the season, but you have to try really hard to get into this meet. Jill Miller, coach at Kiowa, is your contact, but the meet is not publicized and is steadfastly scored by hand with old-school devices. The list of schools that go there also keep coming back. It's clear that something is happening at this meet that keeps folks coming back.

Dakota Ridge (first Tuesday in October) rates an honorable mention for a course that gets you away from the feel of the city. The terrain starts to trend toward rugged around the school property there. Elizabeth also runs a course around their school campus that, at least in places, gives the feel of being a little removed from civilization.

At the opposite end of the spectrum, Englewood's Windjammer Invitational and Kennedy's Commander Cup may be the most urban meets on the region's roster of invitationals.

Cherry Creek's second-weekend invitational strikes a middle ground. The course embodies plenty of hard surface (and tends to run fast) but also meanders through Cherry Creek State Park, complete with expansive vistas and a feel of natural surroundings. The Cherry Creek folks, however, keep their meet to about 20 schools and it probably isn't easy to get in. I've never tried to get our team in, but the list of schools from last year is pretty close to what the list of schools was 10 years ago. That would suggest that places on the start line aren't easy to come by.

Rock Canyon also strikes a middle ground with their partly on-campus course. Lots of sidewalk, but also lots of up and down.

Kent Denver annually runs a very small meet among the south Denver 3A metro schools on what is at least a close approximation to the old state meet course at Kent Dener. Word is that the Sundevils aren't interested in expanding the meet, though the course itself is spacious enough and does have a certain charm to it.

St. Mary's Academy goes to Bible Park in Denver to host their meet. But, having absolutely no known experience with Bible Park, I'm at a complete loss to know what to say about this meet except that it's an early-season weekday affair, and therefore you might want to look into the meet if you have a transfer rule case you want to get eligible to run on your varsity as soon as possible.

But when you think of south Denver metro meets, there is really only one meet that ever comes to mind first. That one meet is the one meet for many of Colorado's cross country programs. It is the Liberty Bell Invitational. The LBI is hard and flat (and slightly downhill overall). The LBI is fast. The LBI is overcrowded--they shoehorn the teams onto a starting line that is barely wide enough for one runner per team. The LBI is four divisions, plus JV races. The LBI enjoys a national reputation. The LBI draws more out-of-state teams than any other meet in the state, and probably more than any three other meets. The LBI is non-stop, pedal-to-the-medal racing on Friday afternoon #3 of the invitational season.

The Liberty Bell meet web site has a lot more information, including some history, about the meet that many in this crowd would find of interest.