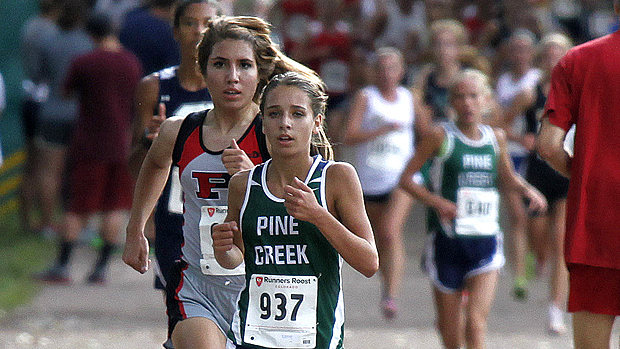 Kaleigh Kroeker holds the narrowest of leads over Alaina Anderson at one mile. Photo by Jeff McCoy.

While many of the slated schools were forced to miss Liberty Bell on account of the widespread flooding in Colorado, Pine Creek had no issues getting to the meet. And, the Eagles made the most of their opportunities.

After running third to Cerake Geberkidane and Paul Roberts at Lyons last week, Zachary Alhamra found the winning formula this week. Alhamra's time of 15:31 was easily the top time posted for the entire day.

Next behind Alhamra was Cheyenne Mountain's William Mayhew. Mayhew has now regained his varsity eligibility following a transfer rule situation and is already making a huge impact on the Cheyenne Mountain scoring five.

On the girls side of Division 2, Kaleigh Kroeker of Pine Creek and Alaina Anderson kept it interesting for a good portion of the race before Anderson became a casualty of the race. Kroeker then went on to win convincingly in 18:28, five seconds ahead of Columbine's Danielle Cobb.

With three in the top six, Pine Creek ran almost unthreatened to the team title with 52 points. ThunderRidge slid into second with 73 points. In the boys team tally, homestanding Heritage took a narrow, five-point victory over second-place Rock Canyon, 84 - 89.