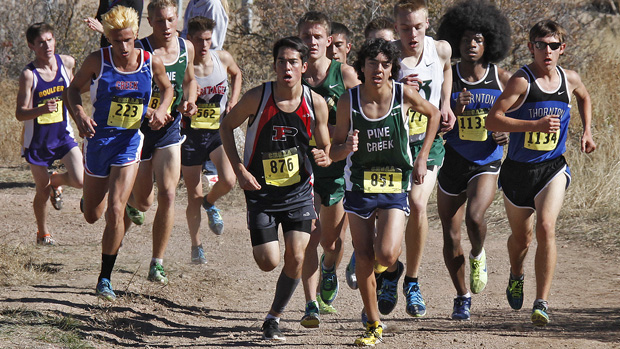 Behind Cerake Geberkidane, it was a very spirited race for second for much of the race. Photo by Jeff McCoy.

When you meet another coach in the stadium at the Norris Penrose Event Center, it's time to strike up a conversation, because neither of you are moving very far very soon. Such are the givens of getting around among the crowds there. 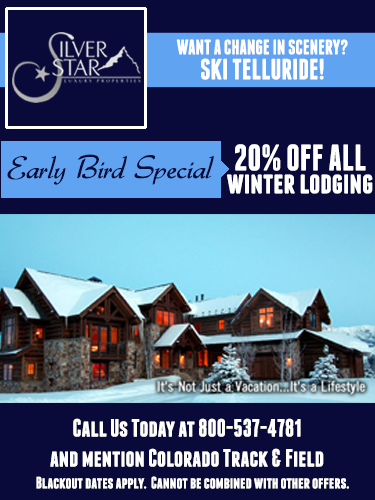 So, when I ran into Jonathan Dalby there shortly, I asked what I thought was a safe question, "Well, did you repeat?"

I should have taken note of the look on his face before I asked. Genuintely perpelexed, Dalby responded, "I don't know."

Last year, Mountain Vista struggled, though they would ultimately win, to recover from the impact of a too-conservative start. This year, it was an unexpected turn of events on the backside of the course that  inhad Dalby's concern at the high end of the scale. Paxton Smith's race had gone south of him after running a very strong 16th at the top of the hill. While there's no shortage of teams with that kind of story to tell, most of those teams aren't in the position of Mountain Vista, being heavy favorites with much to lose from such a situation.

Compounding Dalby's concern was the fact that the green wave of Mountain Vista finishers had not started until 21st place, a little later than usual. All of that can get a favored coach's nerves a little out of sorts.

As it turned out, Mountain Vista had more than ample margin, but those are the kind of moments that give pause even to coaches of Jonathan Dalby's stature.

All season long, Mountain Vista has been an exceptional pack team. Connor Weaver sometimes gets out front of the pack a little, but two through five have been coming through in close order wherever meets are held. Most of that same story held true at state.

Connor Weaver rolled through in third, right behind Pine Creek's Zachary Alhamra, just as it had been at regionals nine days prior. After a long succession of singlets with no winged MV on the front, Andrew Walton broke the drought at 21st. Mercifully for MV, Tyler Matzke and Blake Graf came close behind in 25th and 26th.

Then came the long wait, the kind of wait that can make a coach age ten years in 30 seconds. Carson Hart would close out the MV scoring in 56th place at 17:41.

Fort Collins would move aside Arapahoe for second, largely on the strength of senior Luke Sheesley's 12th-place finish. Heritage would finish the job they started last week at regionals and displace Cherry Creek for fourth.

Individually, this one was Cerake Geberkidane's show. The Denver East senior breezed through the course in a mind-number 15:48. Nobody even bothered to try to stay with the lanky Angel. To do so would have been suicidal for anyone else in the field.

Alhamra and Weaver came in as a two-three pair, and behind them came the Thornton tandem of Joshua Joseph and Sean Paiz.

So, while the 5A boys race flirted once or twice with suspense, in the end there was very little in the way of surprise to be found.