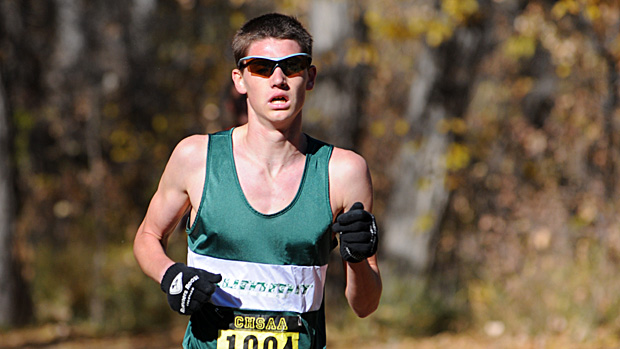 Liam Meirow held off a late charge from close friend Ethan Gonzales to win the 4A boys state title. Photo by Paul Jaeger.
With all the talent that Colorado contained this season, some very big names earned the title of runner up. These names definitely deserve some attention.
Zach Alhamra of Pine Creek took second in the 5A boys race. Despite some key victories this fall, including Liberty Bell, the junior stated that this race was the best of his running career thus far. “This ranks number one for sure. Number one race I’ve ran in my entire life. I’ve never gone into a race this big and been so calm. I attribute that to kind of growing up this year.”  Alhamra finished with a time of 16:29.0.
On the other side of 5A, senior Erin McLaughlin of Boulder had the race of her season taking second. McLaughlin shaved nearly a full minute off her time from the Cheyenne Mountain Stampede two months ago, and bested both Emma Gee and Isabelle Kennedy, both of whom beat her a week ago at her regional qualifier. “I’ve run this course before three times. I knew what it was like and I tried to train accordingly. My race plan was to go out confident and very calmly then take advantage of the hill.” Judging by her 18:58.9 time the training and strategy work brilliantly.
Ethan Gonzales, the runner up in the boys 4A race, led Broomfield to an underdog state team title. Gonzales ran for Broomfield two years ago when the Eagles came into state as the projected favorite and lost.
Coach Greg Weich believes this championship was very redemptive for Gonzales and the rest of the squad. “I’ve had a scar, like a mental scar, so this was a little bit of healing especially for guys like Ethan who was on that team. I’m really proud of him. He’s worked really hard for four years. Weich stated that this victory was the best out of his seven titles.
Also in 4A the TCA boys snagged second place hardware. This makes the 12th year in a row that Titan coach Alan Versaw has left the state meet with some form of trophy. Senior Connor Wilburn was hoping for first place, but was pleased with how the Titans finished. “The guys have never placed this high in 4A before, so we’re pretty proud of what we’ve done.”
Nationally ranked Air Academy harrier, Katie Rainsberger, gapped the remainder of the field by 32 seconds for a second place finish in 4A. The sophomore hopes to better her times at Nike Southwest next month, and in the next two years she looks forward to continue racing Colorado’s elite. “I hope to better my times from the previous season every season and to get to the level that Elise [Cranny] is at now.”
Underclassmen Greta Van Calcar, Lexi Reed, and Lauren Offerman joined Rainsberger in the top ten. They will be chasing Rainsberger for the title next fall.
3A had it’s own high performing sophomore in Taylor Stack. The standout from Salida took third in his regional a little over a week ago. . At State, Stack decided to give himself a promotion to second. “It was by far my best race this year. I was really surprised by how well I did. It was just crazy.” Stack improved on his time from last year by 40 seconds crossing the line at 16:50.2
AND NOW, THE REST OF THE STORIES...
Perhaps the most stunning performance of the day was Liam Meirow’s 4A individual victory. But the performance did little to surprise two individuals. The first was Meirow himself. “From the start of the race in my head I believed in myself saying ‘I’m going to with this race no matter where I am.’”
The second was Ethan Gonzales of Broomfield. “Liam’s been a buddy of mine. I think everybody in Colorado needs to look out for him. He’s been really underrated and no one’s paid attention to him. He’s really, really good and I think he proved that today.”
The friendly rivals provided the closest individual contest of the day as Meirow’s margin of victory was a narrow two seconds. “I was toe-to-toe as we entered the stadium,” said Gonzales, “but I had nothing left.”
If you insist on a "second" link to Meirow's story, we shall note that he is the second individual state title winner for Summit High School. For those of you who can remember back almost ten years ago, Whitney Anderson was the first.
Ben Butler of Skyview made sure his school’s first year of CHSAA eligibility had a high note, with his fourth-place finish in 2A. “Our school this is our first year of CHSAA certification and it’s an honor representing them. It feels great.” Butler, a sophomore was the first runner in 2A not wearing a Lyons uniform to cross the finish line. He was also the last runner from 2A to crack 17 minutes with a time of 16:52.6.
And, finally, we salute Jacob Benson as one extraordinarily committed individual. The senior is not able to run for his school of attendance, South Park, so twice a week Benson commutes over forty minutes to practice with Platte Canyon. “I need to thank everyone for their support, both schools for their support. For transportation, my parents and Shan Hessler’s parents for helping me get down to practice.”  The commitment of the communities and double life of the runner paid off in a big way as Benson ran the Norris Penrose/Bear Creek Regional Park circuit in 16:46.0. In so doing, Benson moved from second last year to first this year.
Tweets by ColoradoTrackXC