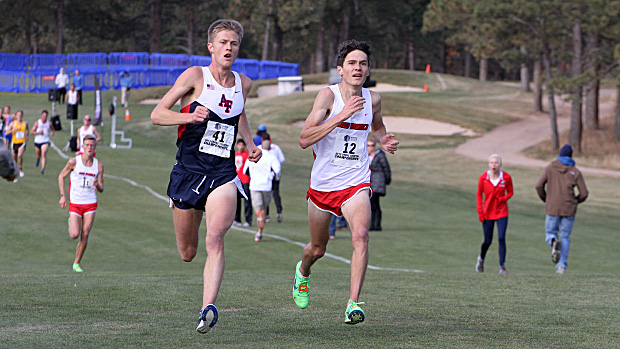 With 200 meters to go, it all came down to a showdown between Isaiah Bragg and Luke Caldwell. Photo by Alan Versaw.

In the natural order of things, wolves chase sheep and generally make life miserable for the woolly creatures.

This morning, however, it was the Rams doing the chasing, but the Lobos got away with the trophy--though not by all that much.

If you've watched a few quality collegiate cross country meets, you understand much of the process. For most of the first half of the race, sacrificial lambs go to the front of the pack and eventually get swallowed up by the real lead pack and spit out the back. And so it was for the first 4K of the Mountain West Conference men's race. It may even have been more that way than usual in that the race was at 7000 feet and most of the competitors were being careful not to step on too much gas too soon.

At 4K, however, a group of New Mexico Lobos made the first meaningful break from the field. Sensing the moment for real racing had come, Luke Caldwell, Adam Bitchell, and Pat Zacharias broke to the front of the field. Initially, only Wyoming's Garrett Zans covered the break, but Air Force's Isaiah Bragg would soon bridge up with the breakaway pack.

"I knew making such a big surge was a difficult thing to do at altitude, and that's kind of why I did it, because I thought know one would come with me," offered Caldwell, "but it hurt me a lot, I was struggling." 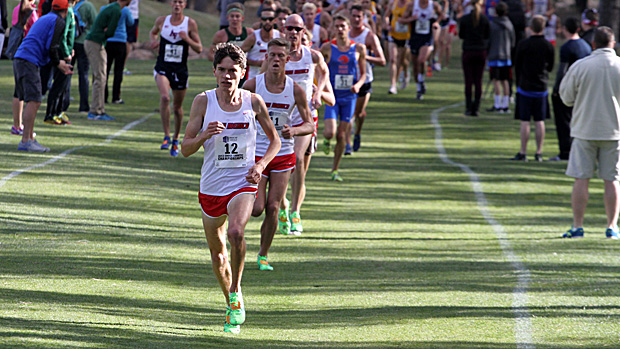 Just past the midway point of the race, Caldwell, Bitchell, and Zacharias make the break that seal New Mexico's advantage in the team scoring.

By 6K, Bragg had not only caught up with the pack, but was challenging Caldwell for the lead. Perhaps weary of carrying the burden of the lead, Caldwell seemed content to led Bragg do the hard work for another 1000 meters. Bragg and Caldwell had cleanly separated from the rest of the lead pack at 7K, and it was evident it would come down to who had the most left in the tank.

Caldwell surged and momentarily took over the lead, but Bragg refused to fold. With 200 meters to go, Bragg went full throttle and finished the job he had started at 6K. Bragg would open a lead of four seconds by the time he crossed the timing mat victorious.

For New Mexico, an individual title was surrended, but it was evident from the next several places that nothing else of importance was lost. Adam Bitchell and Pat Zacharias followed in third and fourth, with Zacharias barely holding off Garrett Zans, then Sean Stam in eighth and Elmar Engholm in 15th.

The only team to make a serious run at the Lobos was Colorado State. The Rams began their run of scoring positions with Ben Larson's seventh. Then a closely-packed group and Andrew Goodman, Christian Mayer, and Jefferson Abbey went 9-10-11. Alex Muntefering crossed in 14th, and there was a brief flicker of hope for Art Siemers' crew, but that hope was quickly snuffed by Engholm's 15th.

New Mexico 32, Colorado State 51--but make no mistake that the Mountain West Conference showed much greater parity today than it did last year. Rounding out the top four were Air Force with 80 and Boise State with 101.