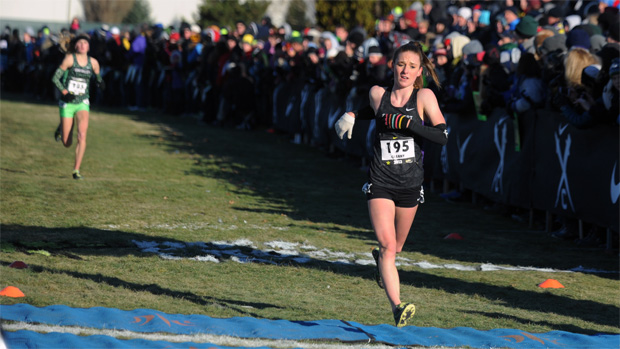 Elise Cranny crosses the finish line in 16:53 with Sarah Baxter in her wake. Photo by Don Rich.

On the list of meet titles for NXN 2013, three went to Washington and one went to Minnesota. Each of the highest honors managed to skip over Colorado.

But that is not at all the same as saying Colorado had a bad day at NXN. Quite the contrary, in fact.

For those who watched the girls race, it became evident less than 2K into the race that it would come down to one of Sarah Baxter, Alexa Ephraimson, or Elise Cranny, though race announcers were slow to recognize Cranny as a contender. Cranny matched every move Ephraimson and  Baxter put on through the first 4600 meters, patiently waiting for the chosen time to initiate her own move. In retrospect, Cranny's move probably waited just a few seconds too long.

Ephraimson, who appeared to be fading and out of title contention at 4200 meters, produced a massive surge over the last 500 meters that caught Cranny first, then Baxter. The move caught both unawares and both as if they were flat-footed. Cranny had plenty left to move by Baxter for second with a four-second margin, but Ephraimson's pass came with such speed and energy that Cranny was unable to mount any sort of adequate response. All three obliterated the existing course record, which now goes to Ephraimson at 16:50.02.

The part of the Colorado story that wasn't so evident, unless you were there watching, was that sixth and seventh places went to Katie Rainsberger and Lauren Gregory. Gregory had run in the top five through two-thirds of the race before falling back a place or two. Rainsberger had patiently bided her time, moving up from 11th at the first kilometer to her eventual sixth. Erin Norton, the third of Colorado's three individual qualifiers, finished in 70th at 18:43.

In the team battle, Monarch would edge Fort Collins by a single point for fifth. The way that Monarch did that, however, surprised more than a few of us. All season long, Monarch has been banking heavily on the combined efforts of their seniors. And, Kaitlyn Benner did lead the way for Monarch again today, finishing 61st in 18:37 (24 team points). But, it was freshmen Holly Bent and Audrey Lookner who stepped up to play critical roles in today's fifth-place finish. Bent finished in 69th, scoring 30 team points, while Lookner finished in 92nd, scoring 50 team points. Bent and Lookner finished as Monarch's #2 and #4 runners on the day, easily making the difference between a 5th-place finish and a finish further down the ladder. Claire Green ran #3 and Karina Mann #5 for Monarch, completing their scoring.

Fort Collins, meanwhile, was running fifth at the first kilometer, then checked off of the leaderboard mid-race, only to force their way back up again at the end. Behind Gregory, it was Devynn Miller, then NXN four-timer Audrey Oweimrin, then--in close succession--Samantha Muller and Kari Van Zyl, preserving a sixth-place team finish by a scant two points.

Put together the 5-6 of Monarch and Fort Collins with the three of Davis, and you have all three Southwest region teams finishing in the top six. In case you felt like it was an extremely tough region this year...

And, as a closing note on the girls race, Monarch's edging of Fort Collins is the first time ever that any Colorado team has beaten the Fort Collins girls at either NXR-SW or NXN.

The boys race, of course, had no Colorado team entries, but the Colorado individuals more than held their own. Cerake Geberkidane ran with the leaders through the first 3K, executing his race plan flawlessly. When Kai Wilmot made his break from the field, however, Geberkidane's legs failed to respond to the call. At the very moment that Wilmot's stride went totally fluid, Geberkidane's form broke down ever so slightly, signaling that a stirring race to the finish was not in the offing for this day.

Geberkidane did, however, manage to hold on for a fourth in just over 15:09.

While the national media attention was focused squarely on Geberkidane, Colorado's other two entries were quietly having a nice race of their own. Pine Creek's Zachary Alhamra finished 20th, a very strong ninth among the individual qualifiers. Bailey Roth was only four places behind, and 12th among the individuals. Alhamra and Roth posted times of 15:25 and 15:29, respectively.

Alhamra and Rainsberger are the lone Colorado individuals with hopes of returning for NXN 2014.