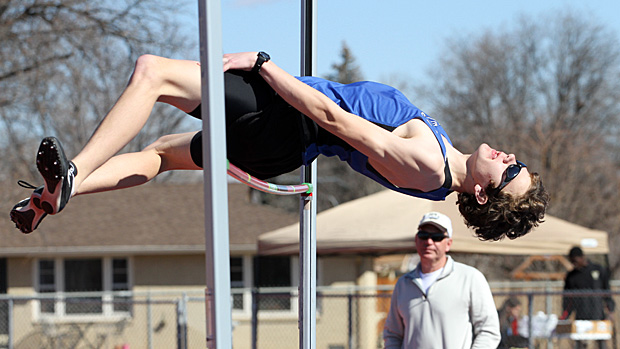 Ryan Smith leaves plenty of room to spare at 5-8 on his way to winning the RE-1J District meet at 5-10. Photo by Alan Versaw.

Nothing close to all of Colorado's high school teams were in action last weekend, but there are already some new names we're going to need to learn. I don't propose that what follows is an exhaustive list, but I've summarized below a few of the names catching my eye from last weekend's results that never before caught my eye:

Kent Harris - Lutheran: I'm guessing Harris is one of the reasons behind Lutheran's lights-out relay performances to open the season at Fort Morgan on Saturday, but he also opened with an 11.76 (-2.7) 100 meter dash and 23.54 (-3.2) 200. Lutheran wasn't short of speed to begin with, but Harris adds a whole new set of options for the Lions. Harris,a sophomore, had no times for 100s and 200s from rankings last spring, but did have a best 400 time of 55.23 last spring.

Elliot Minor - Niwot: Here's a guy who took his 1600 PR from 5:15 to 4:44.68 last weekend. Niwot's distance group suddenly looks a good deal deeper, both for track this spring and cross country in the fall. Minor is a junior this year.

Chris Erwin - Frederick: Maybe if I'd been a little more awake, I would have seen this one coming. The Longmont area coaches certainly seemed to know about Mr. Erwin. Erwin ran 10:05.35 on Saturday at the RE-1J meet. That took 69 seconds off of the Frederick senior's 3200 PR. At the end, he was the only one remotely close to Joel Such. Erwin did, however, had a couple of nice cross country races in the fall that managed to escape my notice.

Tony Feula - Mead: Mead has hurdles! Feula unleashed a 15.89 (0.0) on Saturday. That's 1.14 seconds better than his best time from all of last season, without the benefit of an indoor season. Conventional wisdom says hurdles take a few reps to polish. If Feula has some polishing left to do, we will likely have to find room for him somewhere in the state field.

Ryan Smith - Lyons: It's not that Ryan Smith is an unusual name. It's that nobody from Lyons by that name has ever high jumped 5-10 and won a meet before. Smith does a lot of things for Lyons, but this is a definite step into state-contending kind of territory in an event where Lyons appeared to be a little on the side of weak going into the season.

Trent Poulsen - Lyons: Okay, so Smith wasn't the only Lion to surprise in a field event on Saturday. Poulsen took his long jump PR from 17-11.75 to 19-6.5 in the space of six jumps. Yes, indeed, Lyons will be trouble in the 2A jumps this spring.

Kyleen Newman - Erie: There are lots of things Coach Scott Leiding should be smiling about these days, and one of them is the brand-new-to-track-and-field performances on Saturday of Kyleen Newman. 13.27 (0.0) and 27.71 (-0.8) in her track debut means the Tigers have an extra arrow to work with in the speed quiver.

Aleksandra Anderson - Prairie View: Okay, so this one is a familiar name in an unfamiliar place. Anderson debuted the 300 hurdles in Fort Morgan Saturday to the tune of 50.31. Certainly, Anderson has decent speed to begin with, so if the refinement of technique continues, this could be a very promising event for the Prairie View sophomore.

Erica Elpers - Strasburg - Elpers has thrown some shot put before, and with some success, but her season-opening mark of 30-5.75 is well over a foot ahead of her best mark from last season, indicating some productive use of the weight room and/or refinement of technique since the closing of last season.