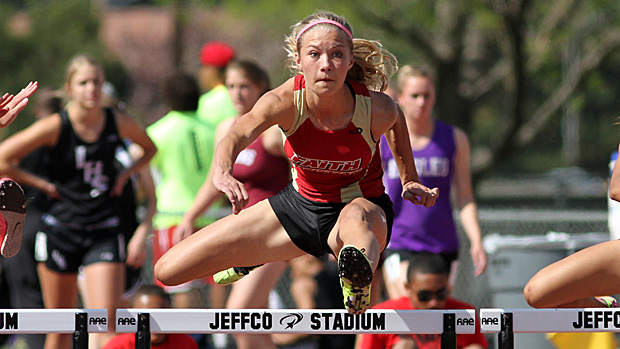 Coming in to the state meet in 3A it has been a tale of the usual suspects so far this season. The Titans of The Classical Academy find themselves facing off against the all too-familiar Titans of Coal Ridge. The Eaton girls team in their not-so-subtle red and black is always there to make their presence known along with their northern Colorado counterparts from Frontier Academy. Manitou Springs has also enjoyed an impressive 2014 campaign.
Unless someone is willing to break the law, it is impossible to take home a state championship trophy on the first day of the meet. Teams that are successful on this stage always find a way to make moments happen. Thursday held a few special glimpses of what is coming the rest of the weekend.
The fireworks started early in the 4x200s. On the girls side Coal Ridge took the top overall time in to the final followed by Moffat County.  When it was the boys turn Manitou Springs took the right to the best lane in the final followed by Classical Academy, Coal Ridge and Frontier Academy.
Sophomore Taylor Finn from Manitou Springs and freshman Sarah Yocum took the top overall seeds in the girls 100m hurdle final. Right behind her. Leah Hinckfoot from TCA and Amber Bowles from Coal Ridge also made the final to keep things interesting in the team scoring.
The boys 110 hurdles got real interesting real quickly as a mid-race wipeout took down four athletes and scattered hurdles like a tornado had struck the track. After a disqualification and a little time to clean some mid thigh raspberries the four who went down hard were allowed to re-run the heat. Despite the epic thrashing, Andy Bowles from Coal Ridge, Trevor Lyons from Strasburg, Ivano Del Piccolo from Basalt and Will Schmidt from Jefferson Academy all made it to Saturday’s final.
It was a great day to be from the Metro League and running the 4x800. Peak to Peak girls came into the race with the #1 seed and worked their way through four hard fought legs to take the title by five seconds over Salida.  Dallas Frisbie anchored the winning effort. Classical Academy rolled in third.
The boys from Holy Family clearly showed up motivated and ready to race today. A gutsy Aaron Hillman took the lead on the second lap of the opening leg and from there Holy Family was never out of the race. When Erich Hixson took the baton for the anchor he found himself with a Titan on his back. Hixson looked like he accelerated all through the final lap taking the win over Coal Ridge’s second by 3 seconds.
In the 200 prelims Moffat County continued their great day sending Kayla Pinnt to the finals with the top seed. To make the team scoring interesting, Brittany Pierce from Eaton, and Kendra Frieden from TCA will be there to keep her company. Manitou Springs will send two boys to the finals in Dustin Bohnert and Malachi Peterson. Nick Deray of Classical Academy and Xander Camp from Cedaredge will continue the battle for the trophy with the little golden dude on it.
In the 3200 Eva-Lou Edwards did what Eva-lou Edwards does in taking home the 3200m state title, leading from the gun and winning over Kelsi Lasota from Estes Park 11:06.15 to 11:11.95. Makayla Santos from Frontier Academy and Maddie Mullen from TCA went 3-4.
The boys 3200 looked more like a battle of attrition as the top seven runners stayed in a tightly knit pack for the first six laps. With about 600 to go Conner Wilburn from TCA and Marcus Rodholm from Manitou Springs started going after each other like a couple of prize fighters. In the end it was a gritty last 50-meter flurry from Wilburn that took the title by .51 over Rodholm. Chris Baker from Frontier kicked in third just ahead of Zach Walsh from Basalt in fourth.
For those who missed the hint in the 100 hurdles, the 400 prelims made it evident that 3A must find room for one very talented freshman by the name of Sarah Yocum from Faith Christian. Yocum is wasting no time making her mark on this meet. On the day, Yocum qualified for the finals in the 100 hurdles, the 200m and the 400m. Brittany Pierce’s 58.59 for Eaton was the top overall seed for the 400 finals.
Daniel Marsh from Colorado Springs Christian ran a 50.34 for the top seed in finals. Chris Contreras from Coal Ridge and Nick Deray from TCA will give the crowd another opportunity to see a battle of Titans in the final.
In the cozy little pole vault venue off the southeast corner of track, David Jones from Eaton took the 3A title at 13-7. The girls high jump was taken for the second year in a row by Taylor Strohecker from Pagosa Springs--by an inch over Mckayla Bauer from University. Bauer and Strohecker kept it interesting long after the rest of the field had departed on misses.
In the making-things-fly-horizontally sections of the stadium, Nick Paradiso from Trindad won the boys discus over Garrett Coalson of Trinidad and Austin Williams from Cedaredge.
Austin Baumeister from Frontier Academy dominated the triple jump winning in 43-2.75. Baumeister remarked on his win, “Words cannot describe how good this feels. It is truly incredible to win.“ Enhancing that feeling, his win helps fan the flame of Wolverine title hopes.
With one day of boys finals scored, Frontier Academy is out in front with 24 points followed by TCA with 20 points, Eaton with 18, and Coal Ridge, Sterling and Holy Family all sitting tied in 4th place with 15. Hang on to your hats. This one is going to be a derby to the end.
For the ladies Estes Park is currently sitting in the lead with 14 points followed by TCA with 13 and Pagosa Springs with 11. Expect to see teams like Eaton in 13th and Coal Ridge in 21st start to ascend the leaderboard as sprint and relay finals are tallied the next two days.