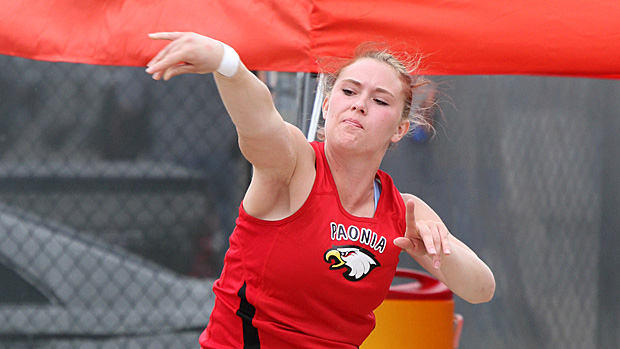 The first athletes to take to the track on Friday morning were of the 2A variety. The weather Friday morning was pristine for the 3200m.
Lyons senior Miriam Roberts came into the race with one of the longest state meet resumes of any of the athletes in the stadium. Roberts gradually pulled away from the crowd on every lap before crossing the finish line first at 11:36.43. The crowd in this case included Bailey Kuechenmeister in second as well as Natalie and Mae Anderson from Hotchkiss coming in third and fourth. For Kuechenmeister, it was her highest state finish ever that didn't involve skis.
But that was just the beginning of a great morning to be from the Roberts clan. Sophomore Paul Roberts had to fight a bit longer than his sister, but pulled away in the final lap to win the 3200 state championship over Ben Butler from Skyview. Doing their part for the team scoring, Lyons teammates and brothers Marcel and Joel Such finished third and fourth.
Watching 2A girls finals all day makes a spectator just start to expect to see Paonia and Hotchkiss girls running neck-and-neck in every race. That will not be the case on Saturday in the 4x100. Paonia took the top girls seed into the final, but Hotchkiss did not make it. Liberty Common has the top boys seed and will be joined by team title contenders Lutheran and Lyons.
Later in the day Paonia padded their point total a little by winning the sprint medley over Wiggins and Crested Butte.
In 2013, Jennifer Celis from Hotchkiss won the 800 state championship in a new record time. Friday she repated the feat, this time lowering the 2A state meet record to 2:11.43. Celis admitted after the race “It feels good. It was definitely one of my goals going in that I wanted to beat my time from last year. I am just so happy about it.“ Celis had to outduel Tabor Scholl from West Grand to take the win. Not wanting the Bulldogs to pull away for the team title, Taylor Polson from Paonia claimed third.
In the boys 800 Samuel Ambler from Rye zipped to the win in 1:57.33 ahead of Jordan Jole from Merino and Jeff Williams from Telluride.
Next on the track were the 4x200 finals. The Paonia-Hotchkiss duel may have reached a head at some point in the third exchange zone, as it appeared that neither team ever held any kind of advantage at any point in the race. Paonia leaned at the line and won by .02 of a second as the crowd around the finish line erupted. To the naked eye it looked even closer. After the race one young man on the infield bellowed a hearty “That was awesome!” One suspects that young man had a Paonia rooting interest.
On the boys side Vanguard pushed through from the day before to take the boys title over Resurrection Christian and Liberty Common.
In the girls 4x400 prelims, it was once again Hotchkiss and Paonia with the top two seeds going into the final.
Things got even more interesting during the boys prelims. The Lutheran Lyons team of Ryan Lee, Darian Perez, Hunter Arnell and Kent Harris managed to dispatch the competition and reset the classification record in their name to 3:23.40.
Meanwhile, away from the track Brandon Hinkle from Yuma was all smiles after winning the pole vault. “It feels pretty awesome. I came into this thinking I want to win this and I did!” Hinkle got over the bar in 13-02 for the title. Jared Clarkson from Akron was second and Damian Smith from Yuma was third.
The discus circle stayed busy in the morning as Garrett Quintana from John Mall won the title over Baylor Buck from Wray and Andrew Vigil from John Mall. “I went with the plan today. I really wanted to win the state championship and set the school record. I did it and it feels pretty great,” added Quintana about the win.
In the boys’ triple jump, Samuel Ambler from Rye was the winner by five inches landing a 44-06. Andrew Morton from Rangely was second and Brian O’Connor from Custer County was third.
At the end of the day on Friday, the Thunderbolts from Rye had pulled into the lead in the boys’ team standings with 48 points. Lyons sits in second place with 40.5 points. John Mall (26 points) and Telluride (24 points) are a bit further back. Probably only Lyons has the remaining events on Saturday that could allow them to keep pace with the runaway Thunderbolts.
With Morgan Hartigan's triumph in the shot put, the girls from the east side of Delta County pulled ahead just a bit in the team scoring. Paonia is currently sitting on top of the girls’ ranks with 56 points. Hotchkiss, the west-side Delta County entry, is sitting in second with 42 points, ahead of Yuma and Lyons.
The Hotchkiss-Paonia rivalry may be heated on the track, but it is evident the girls respect one another. Senior Jennifer Celis from Hotchkiss added, “It’s a lot of fun being able to compete against our rivals.”