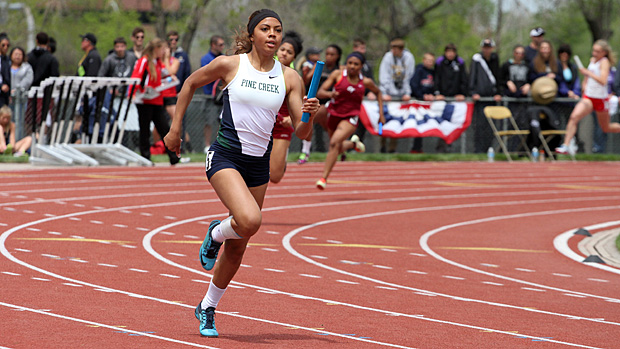 Generally speaking it didn't matter where Ally Watt got the baton, the race was over once she did. But it still wasn't enough to catch Fort Collins. Photo by Alan Versaw.

Pine Creek was closing fast all day Saturday. It just wasn't fast enough. The lead Fort Collins had amassed on day one and day two of the state meet put the thing safely out of reach.

That lead that allowed Fort Collins to hold off a late charge from Pine Creek was largely a lead built on the backs of three individuals. Lauren Gregory's part was a first, and near state meet record, in the 3200, a second by the narrowest of margins in the 1600, and a fourth in the 800. Josephine Natrasevschi added a first in both the shot put and discus. Audra Koopman's part was a second in the long jump and a seventh in the 100.

But all that, impressive as it is, would not have been enough to hold off the Eagles. Other critical pieces were added by a first in the 4x800, a third in the SMR8, a fifth for Becca Schulte in the 400, a sixth for Emma Dern in the shot put, and an after-it-was-all-decided seventh in the 4x400. Take away almost any of these pieces and the meet ends up with a different outcome.

That different outcome would have belonged to Pine Creek. The Eagles, too, were very impressive.

It's difficult to pick a most impressive moment out of Ally Watt's weekend, but it may have come on Saturday morning in the 100 meter finals. At eight meters, Watt may have been dead last in the field. At the very least, she was last among the serious contenders. But, it certainly didn't end that way. Watt ended up winning by .16 over Dior Hall. And, in 100 meter dash terms, .16 is a whole lot of real estate. Seeing that gave a few thousand fans a much clearer impression of why Watt is such a deadly anchor leg on the 4x100 and 4x200.

Those relays, of course, won state titles. When Watt got the baton, it was game over--in a hurry. The Pine Creek 4x200 established a new all-classification record, the 4x100 missed that distinction by .04 of second. With nothing but pride on the line in the 4x400, Pine Creek rolled out another outstanding relay performance with a winning 3:49.30 in the 4x400, this one without Watt (who used up her event quota earlier in the afternoon with the 200 and 4x100). Mackenzie Howie also posted a big contribution to the cause with a third, and seven points, in the 300 hurdles.

In the final tally, though, it was Fort Collins 84 and Pine Creek 80. Cherry Creek would take third at 67.

The big moments of the weekend didn't belong solely to Fort Collins and Pine Creek. There would also be Dior Hall's 13.09 (+1.6) US AT #3 hurdles mark. There would be Carly Lester's new Colorado all-classification record of 41.18 in the 300 hurdles. Lester has been knocking on that door for a while now and finally blew the door wide open. She would spend a little time bent over after the feat, however. Such is the price of breaking that kind of record.

Chyna Ries would fly beyond 20 feet in the long jump yet again. Consistency has become Ries's trademark this season. And consistency isn't necessarily easy to come by in the long jump. Heather Waite barely kept Stephanie Bess from winning two events by claiming the pole vault title on misses. Nobody was that close to Bess in the triple jump, however. Jordyn Colter went sub-2:10 and sub-5 to win the 800 and 1600. Heather Harrower claimed the 400 meter title at 54.90. Nobody had any answers to Harrower's charge down the finish straight.

2A boys: safety in numbers

The uniforms at the start of the 2A boys 200 tended toward the side of monochromatic. Photo by Alan Versaw.