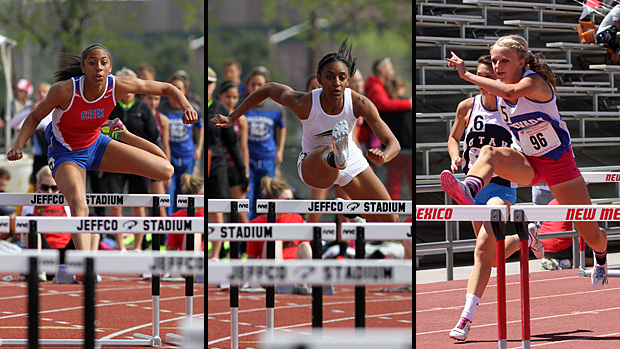 It doesn't get much better than the much-anticipated showdown between Ashley Miller, Dior Hall, and Tiana Bonds in the 100 hurdles. Colorado Track XC file photos.

It's going to be hot in Albuquerque this weekend, but it's not all about the weather forecast. To be sure, there's plenty of heat in the weather forecast, but it might be a good idea to dump some fire retardant on the University of New Mexico track as well.

There is so much top-tier talent headed the way of Albuquerque this weekend that it's difficult to know where to begin, so we'll begin where the meet begins, with the multi events, and then progress through in approximately the same order as the events from the meet.

The projected favorite in the boys decathlon is Zach Bornstein. As you would expect of a decathlete, Bornstein does a lot of things well and should be a legitimate threat to break 7000 points on Thursday and Friday. California likely would have kept Bornstein inside the boundaries of the state this weekend if they had a multi-events competition as part of their state meet, but it was Great Southwest that provided the big opportunity.

Two of last year's top three in the girls heptathlon return for more of the same this year. Alexa Harmon-Thomas returns from Kansas to defend her title, accepting the challenge from Tiana Bonds of Nevada, last year's #3 finisher. Joining the fray figures to be Ashlee Moore out of Arizona. It's going to take well over 5000 to win this thing, and Bonds and Moore should have no problems dealing with whatever heat the Albuquerque meteorologists can dish out. If you like local dark horses, it would be difficult to do much better than Chelsea Challacombe out of Los Alamos or Kyra Mohns from right-at-home in Albuquerque. Don't be too surprised if Challacombe and Mohns are still hanging around when the big three would have normally expected the competition to have wilted into submission.

On Friday afternoon, you'll want to make a short trip west behind the infamous Pit of UNM basketball legend. That's where you'll find the hammer cage and sector. I don't have an early word for you on the field for the boys hammer throw, but the meet expects both Haley Showalter and Katelyn Gouchenour to sling their ball-and-chain great distances. Joining them will be Kelli Thomas out of Georgia, another thrower with big numbers after her name. Showalter is last year's defending champion in the event, but she's added about 20 feet to her 166-and-change that dominated last year's competition.

Back inside the friendly confines of the UNM track stadium, Friday evening welcomes the steeplechase and a few relays. Mercifully, the steeplechase--where competitors take a cooling plunge into the water on each lap, leads off the evening's events. Last year's winners of the steeplechase out of Utah have both graduated, but this event has been picking up momentum in Utah of late. So, it's probably a good bet to figure on a couple of solid entries of out Utah, like maybe Braedin Butler and Tanner Dupaix. Both should be closing in on six minutes for the 2000 meters.

Whoever comes out of Utah on the girls side, however, will have to deal with Clare Sanner out of Kansas. Sanner holds the distinction of being the top returning finisher, at second, from last year's girls race. Cassey Amberg and Crissey Amberg, who get to sleep in their own beds for this meet, make for two more intriguing girls steeple entries.

As for Friday night's relays, you never know quite what to expect when all-star relays try to piece themselves together. One particularly enticing rumor, however, circles around the possibility of the St. Thomas Aquinas girls (Florida) showing up as an intact team with hopes of breaking their own national record time of 1:33.43 in the 4x200. In the cool of the evening, and with no prior events on their legs, that record just might be ripe for the picking.

Action resumes on Saturday morning with the javelin and the girls pole vault. New Mexico has an accomplished pole vaulter of their own they'd like to showcase in Lauren Martinez. But, Martinez has a tall order in front of her if she means to win the title. That will involve going up against Desiree Freier out of Texas. Freier has regularly been over 14 feet this spring, including a 14-6 indoor vault in April. In case the question hadn't already crossed your mind, Freier is the US #1 AT in the high school girls pole vault.

While the poles are bending, the javelins will be flying, and you'll have to make some decisions about which you'll be watching. There's good reason to watch the javelins, as native New Mexican Beau Clafton takes on all comers in the boys javelin with a season-best mark of 205-5. Among those breathing down Clafton's back, however, will be Andrew Henn of Kansas, who owns a season-best mark of 204-5.

The girls javelin matches up several of the nation's elites in Katelyn Gochenour, Chrissy Glasmann of Utah, and Keiryn Swenson of Kansas. Homegrown talent Kayli Farmer will aim at trying to keep pace with the national elites.

As the javelin competition and girls pole vault wind to their conclusions, a lot of things start happening at once. There is no wrong place to be watching. Things just simply get busy for the remainder of the afternoon and evening.

The girls 100 hurdles promises a reprise of the Colorado 5A state meet showdown between Dior Hall and Ashley Miller. Hall ran a US #3 AT 13.09 to win that race, but Miller wasn't far behind at 13.38. Throw in Tiana Bonds who ran 13.50 at the Nevada state meet and you have a don't-blink kind of affair. You also have three of the top five wind-legal marks in the nation from this spring. As the cover photo suggests, it's tough to ask for much better than this.

Miller and Bonds come back in the 300 hurdles, joining Colorado's Carly Lester for a field that joins three of the nation's top twelve marks on the season. Lester's 41.18 won the Colorado state meet and is nationally ranked at #2 on the season.

The boys 300 hurdles brings together another nice collection of the nation's top talent, to include Robert Grant of Arizona, Norman Grimes of Texas, and Max Dordevic of Oregon. It will probably take 36-low to win this one.

The boys 100 throws Arizona's Paul Lucas in with Darrion Flowers of Texas and Andre Ewers of Florida. Heat? No problem for these guys! Lucas, however, may look for his best race at 200 meters, where he will join Corey Dauphine of Texas and Terrell Smith of Mississippi in another elite field.

The girls 100 and 200 will enjoy similarly loaded fields. Local favorite Tiffany Garcia gets to trade strides with nationally-ranked talent like Khalifa St. Fort and Diamond Spaulding of Florida, Aleia Hobbs and Janie O'Connor of Louisiana, Danyel White of Texas, and Chyna Ries, Tashay Brown, and Shayna Yon of Colorado. Florida's Kendall Ellis tops the seeds for the 400 meter field at 52.95. Look for at least one lights-out kind of girls 4x100 relay out of Colorado as well.

The sprint fields are very, very strong for Saturday's races.

Colorado's Zac Petrie and Blake Yount will take their shots at running down Charles Jones of Missour in the 800. There may not, however, be anyone to chase down Kaitlin Rodriguez out of Texas in the girls 800. With a lot of the region's top 1600 talent siphoned off to lower elevation at Brooks PR, the Dream Mile, and a distance carnival here and there, Utah's Lucy Biles figures to come in as the favorite in the girls 1600, but not without significant competition, and that competition may start with Nevada's Sydney Badger, someone Biles has raced against a few previous times.

The horizontal jumps are loaded with the likes of KeAndre Bates of Texas, Ja'Mari Ward of Illinois, and Chyna Ries. Keturah Orji comes all the way from New Jersey with a 43-foot triple jump. There's a few high-end national rankings represented on that list. Owning the top seed in the boys long jump is the aforementioned Terrell Smith of Mississippi. The boys pole vault brings in three who know what it feels like to go over the bar at better than 17 feet. Those three would include Paulo Benavides and Brandon Bray of Texas, plus Tommy Rial of Oklahoma. Altogether, that gives you three of the nation's top eight for the price of one admission. Be sure to stop by and watch the vaulting sometime during the afternoon and evening hours.

The shot put and discus will pull you in with the throws of Kansan Kord Ferguson. Ferguson's marks on the year include a 210-3 and a 67-10. But, amazingly enough, 210-3 doesn't earn Ferguson the top seed in the discus. That honor would belong to Carlos Davis, who will step into the ring with a season-best mark of 212-5 from the Missouri state meet. But, at well over 200 feet, two feet isn't a whole lot of margin for error. And, truthfully, Ferguson has been more consistently out beyond 200 feet over the course of the season. Khalil Davis of Missouri, Annthony Dudley of Texas, and Kevin Roddy of Oklahoma add three more big throwers to the mix.

The girls discus counters for your attention of Haley Showalter and Josephine Natrasevschi of Colorado and Florida's Lloydricia Cameron. All three are well over 150 feet on the season. Natrasevschi joins a Who's Who of New Mexico throwers in the shot put, to include Jazmine Chosa, Ally Mady, Shelby Jones (each of whom were well over 40 feet this spring), plus a few more. The top seed in the girls shot put appears to be Sophia Rivera out of Missouri who heaved the ball 45-8 at her state meet.

You can go to a lot of high school track meets and never come close to the kind of talent that will be assembled this weekend in Albuquerque. Please note that the start of the afternoon/evening track session for Saturday has been moved up from 2 PM to 1 PM to accommodate the larger-than-anticipated field of athletes.

Check back each evening and following the meet on Sunday for results, coverage, photos, and video.