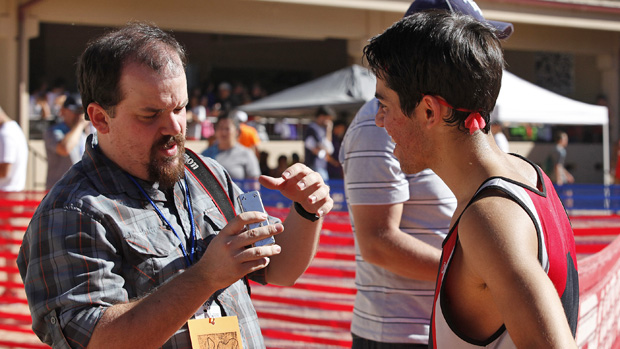 Becoming a state champion involves a multitude of factors. Every runner has a different list of influences that have driven him or her to work harder and run faster. For most runners in the state somewhere down the line it there is a coach among the list of those important to success.
This is certainly the case for 5A boys champion, Marcelo Laguera. After an impressive victory Laguera shared few words, but big smiles. He did make sure to identify the role his coach played this season.
“My coach Steve Urban has really inspired me throughout the years. Basically, after I lost to Zachary [Alhamra] at Liberty Bell, I was pretty devastated. He said, ‘This isn’t over we have a lot of work to do.’”
Laguera’s medal is the first cross country state victory, team or individual, for Pomona High School.
Next to coaches, the most frequently named influence to success by state finishers was family. Tabor Scholl, who tacked one a second state championship to her résumé, said that her little brother played a major role in her return to the top.
“He has been with me all four years whether I did good or bad. He helped me remember why I love running. Even though he’s four years younger than me sometimes I feel like he is four years older than me maturity wise because he always brings me back to home base. He was always like ‘Really, Tabor? You had a bad race--who cares other than you?’ He reminds me why I run and why we run together.”
The win for Scholl bookends her career with state victories. Look for her at Kenosha this November at Foot Locker Midwest.
Behind coach and family, teammates were mentioned frequently, even if that means teammates who have graduated.
Estes Park underclassman and new 3A state champ Lily Tomasula-Martin gave a big shout out to Kelsi Lasota who graduated last spring.
“My former teammate Kelsi Lasota is my best friend. I saw her race and develop.”
Tomasula-Martin said she had the benefit of learning from Lasota’s successes and mistakes. The observation apparently paid off as the sophomore went undefeated all season against 3A competition, including big wins at the Cheyenne Mountain Stampede and Liberty Bell.
Lasota? She's now a freshman running at Boise State
Speaking of admiration of the fast as influence, Paul Roberts’s name was brought up in multiple interviews, two of which were not even his own teammates. 2A runner up Corey Lewenkamp and 3A victor Ben Butler both said the quest to beat Roberts has driven them to a higher level of competition.
“Everyone is chasing him. He’s a great runner. He’s going places. He drives the rest of us, I feel.” 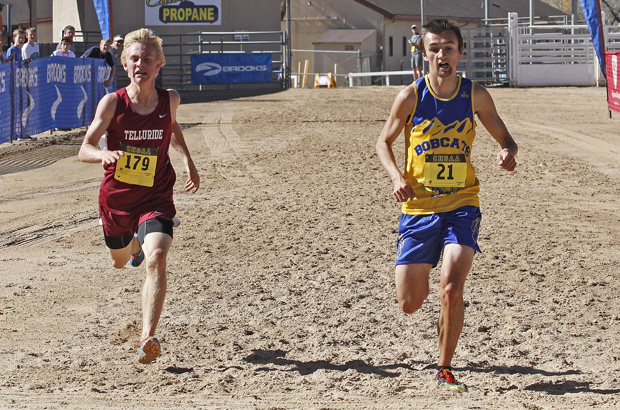 Roberts owned the fastest time of the day with an impressive 16:13.1. 13 seconds later Lewenkamp outkicked Jack Plantz of Telluride by a tiny 0.3 seconds (photo, above, by Karen McCoy). Both runners had huge smiles after the duel. Lewenkamp said he had no idea whether he was second or third, but as a senior the last moments of his last high school race were some of his most memorable.
Despite not running against Lyons this year due to Skyview Academy moving up a division. Ben Butler listed God, family, and team as factors to his success but made sure to mention the team he chased for two years in 2A.
“I would like to give a special thanks to the members of the Lyons cross country team for always just providing a motivation for me.”
This phenomenon was not limited to Roberts and Lyon. The fastest female runner of the day Katie Rainsberger missed the presence of certain rival.
“Elise Cranny is a role model, someone you can you look up to. She is everything I want to be. As great as it is right now, I kind of wish she was here.”
Now, with Cranny’s departure to Stanford, it is up to individuals like Rainsberger to inspire the next generation.
Rainsberger’s high standard of excellence paid big dividends this season. The state meet joins a huge win at Desert Twilight for the junior from Air Academy. Expect slightly cooler temps in Arizona when she runs at the Nike regional.
Tweets by ColoradoTrackXC