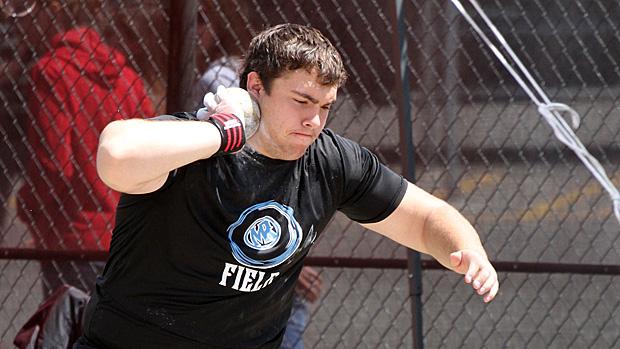 Brighton had a big evening at the Thornton Early Bird Invitational on Wednesday, dominating both the boys and girls divisions of the meet. But, it was the Mountain Range Mustangs who were busy updating the school record book.

Every once in a while, you have one of those meets where multiple school records fall, but they really aren't supposed to happen on the first meet of a season. But try telling that to Coach Chris Smith. He will likely tell you to dance in the streets when they come and don't bother trying to set a schedule for them.

Records fell like rain for Mountain Range. Zoe Gilbertson got half of the new school records on her own, finishing the 100 hurdles in 14.39 (+0.0) and the 300 hurdles in 43.90. There are a lot of schools that have been around a lot longer than Mountain Range and can't rival those records.

Zoe's brother Max kept things in the family with 110 hurdles record of 15.28 (+0.9). And thrower Patrick Byerly rounded out the parade of school records with a 52-11 in the shot put. That throw, incidentally, marked a three-foot PR for Byerly.

Mia Coats was painfully close to another school record, winning the 100 in 12.74 (-1.6). A slight positive wind probably would have pushed that in Coats' favor. But, there should be more opportunities coming this season.

The 13-6 pole vault by Skyview's Nickolas Wotton might well also rank as a new school record out of this meet.

Though several school records were revised on the evening, those weren't the only individuals posting marks of note.

It was a nice day to be an Indian.

Horizon's sprints soared with Jacob Dinkel taking the 100 and 200, plus big wins at 4x100 and 4x200. Brighton's Thomas Keefe took a pair with the high jump and long jump.

Green Mountain's girls relays claimed everything in sight from 4x200 to 4x800. Cammy Sargent also posted a nice individual win with a 58.61 in the 400.