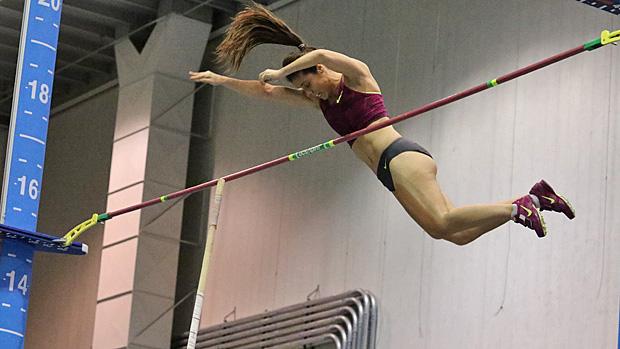 Back in January, Aikaterina Stefanidi was flirting with the best-ever women's pole vault mark in Colorado. Weather permitting, she'll be back in Longmont Friday taking another shot at it. Photo by Alan Versaw.

In addition to some of the top high school track and field athletes in the state, the 2015 St. Vrain Invite will feature professional athletes from the US, Germany, Panama, Czech Republic, Israel, Greece, Sierra Leone and Slovenia. A large contingent of athletes from the World Athletic Center, an elite training enclave in Phoenix, will be participating in a variety of the sprint events. Additionally, some of the best local talent will take to the track in the men's and women's miles. They are taking a shot at the Colorado soil records - 4:01.27 and 4:40 respectively. The pole vault fields are strong as well. There are five men who have cleared 16 feet and six women who have cleared 13 feet, one of whom has cleared 15 feet.

Katerina Stefanidi - 2012 Olympian for Greece in the Pole Vault. Currently #1 ranked woman in the world and has cleared 15-5.5 this outdoor season.

Matthias Buehler - 2012 Olympian for Germany in the 100 meter hurdles. Also competed in the 2009 World Championships in the same event. He is a 4 time German national champion in the 110 meter hurdles.

Andrej Poljanec - 10x Slovenian national champion in the pole vault. He has competed at the European and World championships.

Jahvid Best - Former NFL running back with the Detroit Lions. Now focusing on track and field, training with the World Athletic Center.

As a reminder, Colorado Track XC will be live streaming the St. Vrain Invitational. The live stream will be available to MileSplit Insiders and will include both high school and elite (USATF sanctioned) sections.