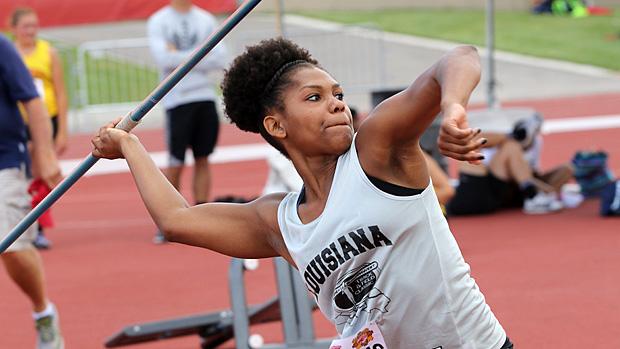 Javelin is an event caught in the middle where state track and fields meets are concerned. One-third of the states have it, and two-thirds do not. Photo by Alan Versaw.

Let's take a closer look at what you get from state to state.

It's not entirely surprising that Iowa would have shorter distance races for girls. Only very recently has Iowa made the move from 4K to 5K cross country for girls. New York, on the other hand, does come as something of a surprise, as the Empire State has been nothing if not a pioneer in terms of girls distance. Thus, it seems odd that girls would be running shorter distances than boys in New York.

What every state has in common are the 4x100 and 4x400. And several states have only those two relays, mirroring the standard of the sport at the collegiate and international levels. Another 40 states add the 4x800, making it easily the third-most popular relay. 24 states add the 4x200, though Washington supports it only for girls.

Other relays that see more sparing use include the Sprint Medley Relay (1600 meters, used in four states, though Iowa uses it only for boys), the 800 Meter Sprint Medley Relay (used only in Colorado and Iowa, and only for girls in both cases), and the Shuttle Hurdle Relay (which appears as a state event only in Iowa and West Virginia).

Colorado's use of the SMR8 is a holdover from the days when Colorado added this event to give the girls the same number of events as boys before girls were allowed to pole vault. When the girls pole vault was added in Colorado, the SMR8 was never taken off the board. I don't know, but a similar kind of story may apply to Washington's 4x200.

Clearly, Iowa is where you want to be if you like relay variety, and plenty of it. Iowa also runs the 4x200 and 4x800 for both genders.

Although 24 states support the 4x200, some states run in with a four-turn stagger, while other states use a two-turn stagger with an open exchange at the third exchange (which can occasionally get a little wild).

Iowa forms an exception to the rule in the longer hurdle event as well. Iowa is one of five states to eschew the 300 meter hurdles in favor of the longer 400-meter version. Joining Iowa in making their hurdlers go a longer distance are South Carolina, New York, Massachusetts, and New Jersey. Of course, USATF goes 400 meters in every state, but the USATF doesn't run any state associations.

While Iowa boasts the most relays of any state and pushes its hurdlers the full 400 meters, the Hawkeye State is the only state to completely ditch two standard field events: the pole vault and the triple jump.

The count of states ditching the triple jump is a bit higher. In addition to Iowa, Michigan, Ohio, Oklahoma, Utah, and Indiana do not support the triple jump.

A total of 17 states support the javelin. As 17 states is a lot to list in a single paragraph, I would refer you to the table below for a listing of those states that include the javelin in their state meet.

In addition to the javelin throw, Rhode Island also contests the hammer throw. You probably didn't have Rhode Island in mind as your first guess of the identity of the most throws-intensive state in the Union. But, such is Rhode Island's distinction.

Several states are now contesting some sort of multi-event competition. As it's not entirely clear to me in all cases that those events have actual state sanction, I've not attempted to create a list of which states are doing what in that respect.

The table below summarizes the state track meet events, and the number of places scored in each of the state meets, for each of the 50 states plus the District of Columbia. There was a small handful of cases where I had to infer how many places were scored in a particular state, so if you find an error there for your state, please let me know and I will fix. 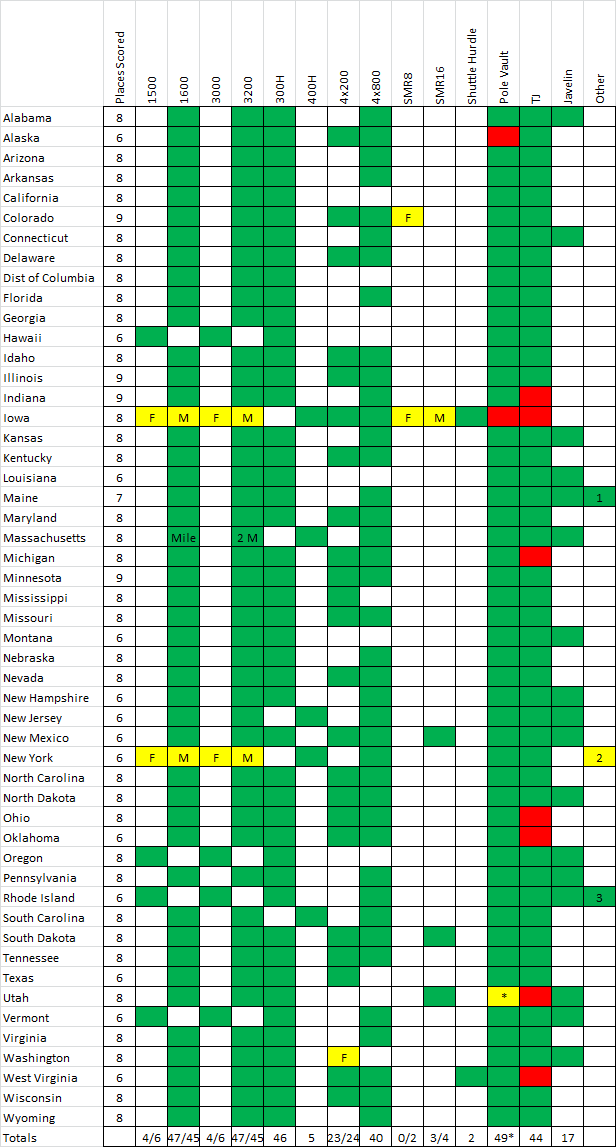