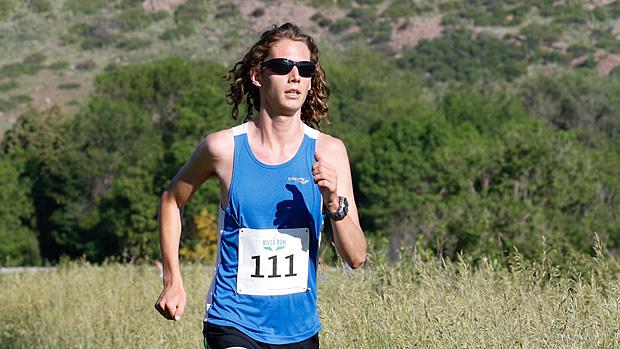 Joel Such, seeming free from injury once again, had little trouble putting away the field at the Lyons River Run 5K. Photo by Renee Haip.

If you mean to keep a finger on how the cross country set is progressing over the summer, yesterday was one of the first markers along the way to pay attention to.

The Lyons River Run, which is much more cross country than road race, drew several from the immediate vicinity of Lyons, but also pulled heavily across much of eastern Colorado, including places like Estes Park, Boulder, Longmont, Colorado Springs, and Wray.

The Northside Stride was mostly an early showcase for runners (past and present) from Denver North and Denver South.

Wearing lucky #111, Joel Such ended up nearly forty seconds ahead of second at 17:05. Paul Roberts finished in third, with the same time as second, but rumors are afloat that Mr. Roberts may have been focusing on helping to help create a more optimal race for Jackson Dickison in second, with whom he crossed the finish line. Dickson (17) listed Boulder as a hometown, but shows up on the roster of Logos Christian School in Moscow, Idaho.

If you're looking for early hints at the #3 position on the Lyons roster for the fall, incoming freshman Colton Jonjak Plahn made a case at 19:47.

Several interesting names dotted the female list of finishers. Lily Tomasula-Martin took a visit to near sea level to win this one at 18:57. And she was not seriously threatened. But the list of names coming in behind her was impressive, including Kaleigh Kroeker, Julia Jaschke, Jenna McCaffrey, Katie Lyons, Sierra Tucker, and Claudia Burgess.

A few miles south at Sloan's Lake, the familiar name of Joseph Manilafasha was putting away the field at the Northside Stride 5K with a time of 16:10, but Michael Nothem was only four seconds behind. The top male finisher with remaining high school eligibility was Riverz Flores at 17:30, followed by Yohanes Alem at 18:38.

On the women's side, Kayla Young continued her winning ways with an 18:36. In tow was Samantha Skeen at 21:34.