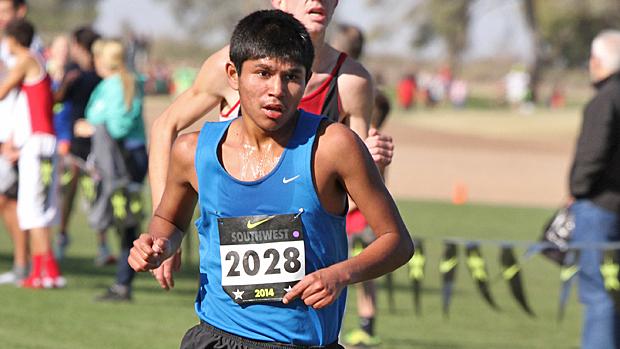 I'll just come right out and say it. The Nike regional system is great, if you're a large school. With each passing year, however, the advantage (or disadvantage) of enrollment count becomes more evident.

Will there ever be a small-school national championship in cross country? I don't know the answer to that question. If Nike doesn't pick the idea up (and they haven't thus far), will someone else pick it up? Again, I don't know.

We'll start with the boys, but the piece on the girls is coming shortly...

Either team, though, would appear to make for an interesting entry into a regional small-school championship event.

You don't have to dig very deeply into the Arizona small-school results before you realize the Grand Canyon State has a bona fide title contender in Tuba City.

Frankly, Tuba City dominates the Arizona small-school rankings in either cross country or 1600 times, but, historically, the school tends to emphasize cross country more than track and that shows up in the rankings as well.

Tuba boasts a blistering returning top five, all at 17:06 or better. Front runner Albert Fuller boasts a top time of 15:51.

Hopi and Ganado also have some serious foundation for a claim to be included in a regional small-school championship race. Their track resume is decidedly stronger than their cross country resume, but Scottsdale Prep could make an excellent case for consideration as well.

If you know Arizona cross country at all, you know that both Tuba City and Hopi boast a long history of cross country excellence in the small-school divisions.

If an NXR-SW for small schools had been in existence all along, it is highly likely that the school winning the most titles would have been Albuquerque Academy--at least if you could have pried the Chargers out of the overall championship race. In the early years of NXR-SW, Albuquerque Academy was one of the top schools in each year's running. Still more, Albuquerque Academy has consistently vexed schools two and three times the size of their enrollment in New Mexico (and even so after New Mexico's multiplier for private and boarding schools is applied).

And, if we look at this year's prospects, AA is once again very much on top of their game. Jordan Lesansee checks in as one of the top small-school athletes in the region in both cross country and track, and is backed up by a very capable squad that includes two of Coach Kedge's own sons. It is an impressive small-school team that can check in with five under 16:30 and five under 4:45.

The truth of the matter is that nobody else in New Mexico this year comes close, and especially so on the track. In cross country, though Pecos and Laguna-Acoma are two schools that annually turn out results for better than their enrollments would suggest. Both look to have solid scoring rosters for this fall (both with five returners under 17:45) and would make nice additions to a regional small-school race if their seasons follow the indicated trajectories.

In recent years, Taos has had some exceptional boys teams that qualify under the small-school heading, but this appears to be a bit of a rebuilding year in the Taos cycle of life. Zuni is typically another New Mexico school you want to keep an eye on, but they, too, seem to be in rebuilding mode this year.

In fact, given the shuffling between cross country and track seasons, it's pretty difficult to declare a strong small-school cross country team leader heading into the fall. You would, however, have to give a solid measure of consideration to Alamosa, Battle Mountain, The Classical Academy, Frontier Academy, Lamar, Vanguard, and Gunnison. It probably won't take long for the season ahead to sort that order out a little, but it's probably best to let the season do the sorting and not make too many advance assumptions about how it will all sort out.

Several of these teams have made at least infrequent appearances in the NXR-SW championship races, with Battle Mountain holding down the best all-time finish there among Colorado's small school programs.

Unlike Colorado or New Mexico, I do not believe that any Utah small-school boys team has ever participated in an NXR-SW championship race. We could speculate regarding the reasons, but Utah's small schools have not, to date, followed the lead of their largest schools where NXR-SW is concerned.

Utah's small school programs tend to come from well away from the Wasatch Front. This is, for the most part, rural cross country with very ambitious travel schedules. There's some shuffling between cross country and track seasons, but the top programs look to be schools like Parowan, Grantsville, and Millard.

Based especially on 1600 times from this spring (Utah uses almost exclusively a three-mile distance in cross country, unlike the other states of the region), it appears Utah's small-school programs would have some difficulty keeping pace with many of the better teams out of Arizona, New Mexico, and Colorado.

But, now that I've blown on those embers, who's to say what Utah small-school cross country might develop into in a hurry?

Your help in tracking enrollment counts is solicited. The rankings linked about were made by identifying schools with enrollment under 1000 using the best available enrollment count numbers last school year. If you know that enrollments have drifted and some schools do or do not belong under consideration here, please pass that information along to me at the e-mail address at the bottom of this page. Thank you!