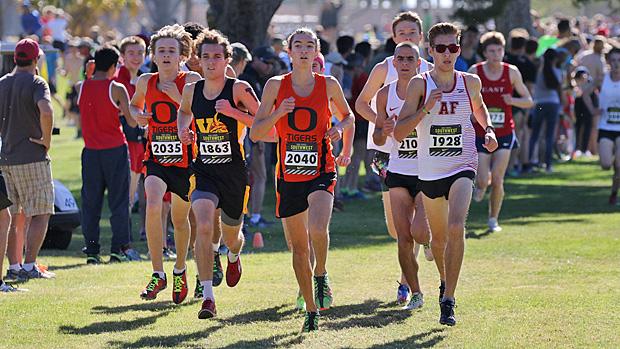 Casey Clinger trades strides with a few co-leaders at a very early stage of the boys championship race. Photo by Alan Versaw.

Mark this one down as one that fooled the prognosticators.

Not only did it fool the prognosticators, it will go down as one of the closest finishes of all time in Nike regional, or any other championship meet, for that matter.

Official results are still not posted as of this writing (4:23 MST), but as announced at the venue, Mountain Vista (CO) scored one of the season's biggest upsets with first place at 108 points. Second place went to Timpanogos (UT) and third place to Lone Peak (UT), both with 109 points.

And, that's a riddle the NXN at-large selection committee gets to deal with in another week.

Timpanogos' presence on the podium was the only non-surprise of the event. Utah state champion Davis slipped all the way to seventh (pending final results). Traditional Utah power American Fork managed a fourth place, and that despite the dominating effort of Casey Clinger who took the individual title, 14:41.7 to 14:42.6.

With unfamiliar singlets and a dumbfounding number of places that exchanged hands over the final 150 meters, nobody watching had so much as a first clue what the order of the top teams would be. So, following the announcement of American Fork in fourth at the awards session, it was hold-your-breath time for the top three places.

Nobody could have imagined that a scant point would separate the top three teams.

And, dissecting the order of finish reveals just a little of how jumbled up it all was.

Drawing first blood among the top teams was Timpanogos, who got on the board with Will Handley and Joe Benson tandemed at 9 and 10. Adam Jensen and Jamison Wilkes answered for Lone Peak in another tandem at 16 and 17. An answer was forthcoming from Mountain Vista in the form of Parker Mackay and Paxton Smith at 18 and 23.

Last to start, however, became first to finish, as Mountain Vista completed their scoring with Joshua Romine in 38th, Alex Fu in 48th, and Shayan Zarrin in 54th. A total of 29 seconds separated Mackay from Zarrin, and the total would have been considerably less than that had Zarrin not taken a fall and gotten spiked early in the race. 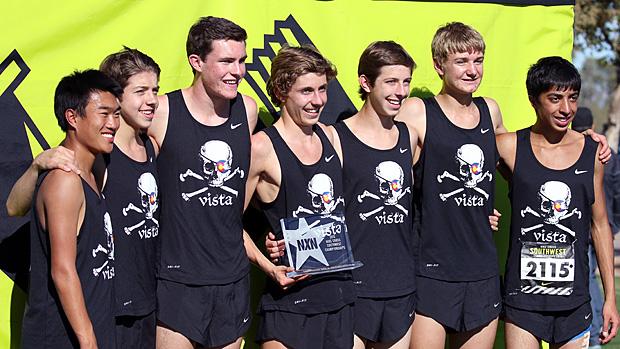 For Mountain Vista, the regional title marks a first for Colorado. All previous boys regional titles have been won by Utah or New Mexico schools. Colorado has, until today, struggled even to qualify a boys team for nationals. But Mountain Vista has now revised that script.

Timpanogos, the Utah 4A state champion and second-place team in an overall merge, will return to Nike Cross Nationals for a second-consecutive year. Traditional NXN fixtures of American Fork and Davis appear to be without reasonable hope to make return trip to Portland.

Lone Peak, only the fourth-place team in Utah 5A last month and fifth in an overall state merge, will bank on the strength of their Nike regional performance to make their case for an at-large bid. Their presence in the top three rates as an even greater stunner than the presence of Mountain Vista at the top of the order, underscoring an old adage about why you run races on courses rather than on paper.

Individually, Clinger earned his title by a gap of less than one second over fellow Utahan Alek Parsons out of Ogden. Behind the Utah pair come four consecutive Colorado entries. Paul Roberts, earning a return trip to Portland, took third. Roberts was followed by Isaac Green, Henry Raymond, and Ben Butler. At this point, Butler sits as the odd man out so far as NXN individual qualifying is concerned. None of the five in front of him are members of qualifying teams, nor does the at-large process figure to change any of that.

Meet Results, Photos, and Videos (being added all evening long, Saturday into Sunday)