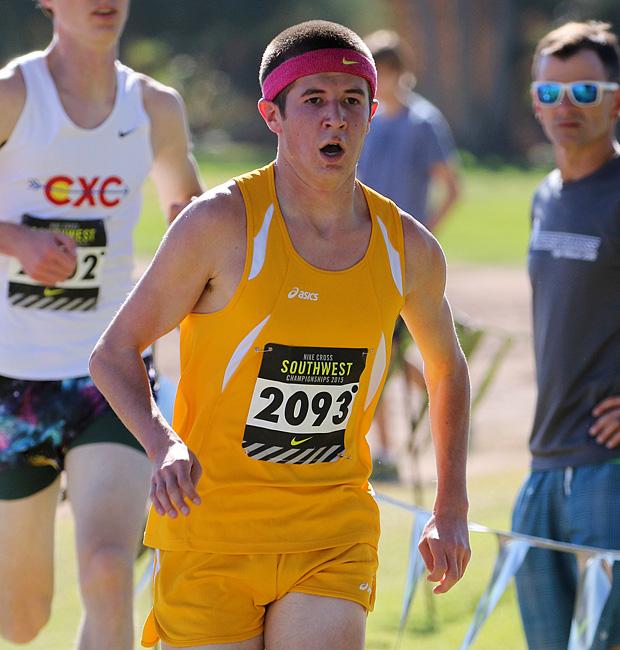 Ben Butler's near miss at last weekend's NXR-SW could be stoking the fires of his motivation this weekend at FLMW. Photo by Alan Versaw.

Just off the west shore of Lake Michigan, about 16 Colorado high school cross country runners will put it on the line for one more shot at qualifying for a national championship meet.

Lauren Gregory and Paul Roberts, of course, already have their national qualifiers in the bank, but both of them will be looking to double their fun on Saturday morning.

Realistically, for a large share of the Colorado delegation spending at least one late November night in Wisconsin, this is a season-ending meet. It's certainly not soft competition these young men and women are up against. Wisconsin, Michigan, Ohio, Indiana, and Illinois are sending their usual large delegations of athletes and among those are some very recognizable names on the landscape of high school cross country.

Still, you wake up Saturday morning and see what happens.

One of the first things that will happen is temperatures something on the order of 40 degrees cooler than most of these same athletes experienced in Arizona last weekend. Morning lows should be just cold enough to freeze the course, but at least partial thawing is likely to occur before the Championship races get underway. A high of 39 degrees is in the Saturday forecast.

In short, this will be an average running of Foot Locker Midwest from a meteorological perspective--neither especially cold, wet, nor warm. The wind forecast is at about 10 mph out of the north, but most of the course is sheltered enough from the wind that the breezes should be of little concern.

Among those staring down the course, the conditions, and loaded fields are Ben Butler, Kayla Young, and Megan Mooney--likely Colorado's best hopes, after Roberts and Gregory, for nailing down a Foot Locker Nationals berth.

Young just missed last year with a 12th-place finish. Her absence from Nike Cross Southwest hints she has made no small personal investment in this year's Foot Locker Midwest race.

Ben Butler comes to Kenosha as last weekend's first man out from qualifying for Nike Cross Nationals. We probably don't need to remind him of that. The Foot Locker Midwest course seems especially well suited to Butler's strengths, and so it's easy to be optimistic about Butler's chance of making it to California. Still, it's an unforgiving cut after #10, so it will need to be a top-tier race for Butler.

Megan Mooney goes to Wisconsin with a story very similar to Butler's. Mooney wasn't quite the first one out of NXN qualifying (although she could become that if at-large berths go just the right way and Lexi Reed moves up into a qualifying spot), but she was the second. Just as much as Butler, Mooney will be looking to extend her senior season into a nationals-qualifying effort.

The ranks of Colorado entries are teeming with potential top-50 finishers, particularly so on the boys side. A strong state finish, despite a relatively small count of entries, seems a distinct possibility for the Colorado boys.

MileSplit will be putting race photos, footage, and results up from Saturday's action as soon as they become available.