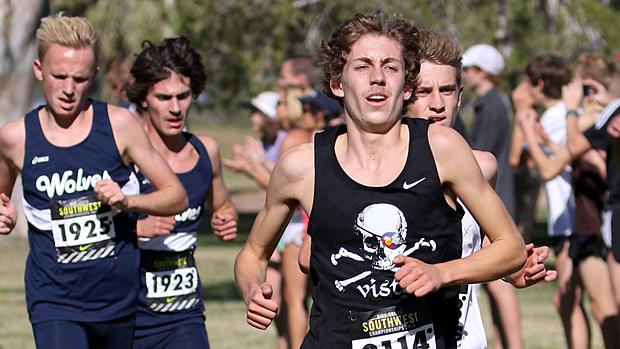 For Paxton Smith and Vista Nation, Saturday is a long-awaited and much dreamed about opportunity to find out what they're made of against the nation's very best. Photo by Alan Versaw.

Tomorrow, 14 Colorado cross country runners will make the trip to Portland, Oregon, for the 2015 running of Nike Cross Nationals. Two days of preliminary activities will lead up to what is arguably the grandest high school cross country event in the nation--and possibly even in the world.

That Colorado delegation will be made up of one team, plus seven more individuals.

Unless Mountain Vista has made roster changes since NXR-SW, they will be sending a team of three seniors, two juniors, and two sophomores to Portland. Paxton Smith generally handled front runner duties, but Joshua Romine and Parker Mackay have both stepped into that role on occasion as well.

This will be Mountain Vista's first appearance at Nike Cross Nationals. None of the team members have appeared at NXN as individuals either. In fact, Mountain Vista is only the second Colorado high school ever to send a boys team to NXN (Fort Collins, with two appearances, is the other school to do so). Mountain Vista also became the first Colorado boys program ever to win the Southwest region championship.

Katie Rainsberger - Rainsberger returns to NXN for the fourth time. In three previous appearances, she has placed 13th, 6th, and 6th. Rainsberger is currently running an undefeated season and is on everyone's short list of individual title favorites. For whatever cross country times are worth, Rainsberger's 16:23.4 stands as the top girls 5K time in the nation for this season. It's unlikely that time will fall at either NXN or Foot Locker Nationals a week later.

Brie Oakley - Oakley, a junior, is about to finish what may go down as the most amazing debut season ever posted by a non-freshman Colorado girl. When she won the Arvada West Invitational on September 19th, a whole bunch of people (including yours truly) were looking around and wondering who that was. Over the last two months, we've found out a whole lot more about Brie Oakley. A second-place finish in the 5A race at the Colorado state meet and a fourth-place finish at NXR-SW have solidified her reputation. All that remains now is to go to Portland and see how the story ends.

Lexi Reed - Reed was a bit of a late addition to the NXN roster as she had to wait for the at-large bid for Davis to come through. Reed finished eighth at the Southwest regional last year (just missing an NXN bid that time) and sixth this year. She has plenty of big meet post-season experience, just not at NXN. That changes on Saturday.

Paul Roberts - So far, so good on Paul Roberts' bid to conquer both NXN and FLN. Roberts had a philosophy of "just qualify" through the qualifying rounds in Casa Grande and Kenosha. Now we get to find out how much is left in the tank and what this young man is really made of. Obviously, Roberts seeks to improve on an 18th-place finish at NXN last year, but the real question is how high he can go.

Isaac Green - Green jumped from 29th at last year's Southwest regional to 4th this year. With that, he earned his opportunity to trade strides with the nation's best at Glendoveer Golf Course in Portland. The fourth-place finish was the first time this season that Green did not win a race he completed (Green pulled out midway through the Pat Amato Classic, but won all other races he entered this fall). NXR-SW was Green's first sub-15 effort in a stellar career to date.

Henry Raymond - Not many people gave Raymond much of a chance to be here after he finished fourth in the 5A division of the Colorado state meet. Evidently, though, Raymond looked at the same evidence everyone else did and found it entirely unconvincing. A strong surge late in the Southwest regional race landed Raymond in fifth place and a qualifying spot for NXN. If there's still more to be shown, there really isn't a better stage on which to show it.

Ben Butler - Like Reed, Butler had to play the waiting game for his NXN berth. And Butler could be excused for having dismissed the possibility altogether, as his graduation to an NXN-qualifying slot hinged on fourth-place American Fork getting an at-large bid to NXN. But, the seemingly improbable happened, and Butler moved up to an opportunity to run in Portland where the course might be slightly better suited to his strengths. Butler ran 14:56 in Arizona to earn this chance. The only blemish on Butler's Colorado season was a single loss to Paul Roberts.

Note: It was previously reported here that Megan Mooney was headed to NXN as well. As it turns out, that announcement--though made in good faith as it was--turned out to be premature. The news of the injury that would have made space for Mooney did not come to Nike soon enough for all the necessary legal and clerical adjustments to be made. As a result, the Southwest delegation of girls individuals this year will number four instead of five.