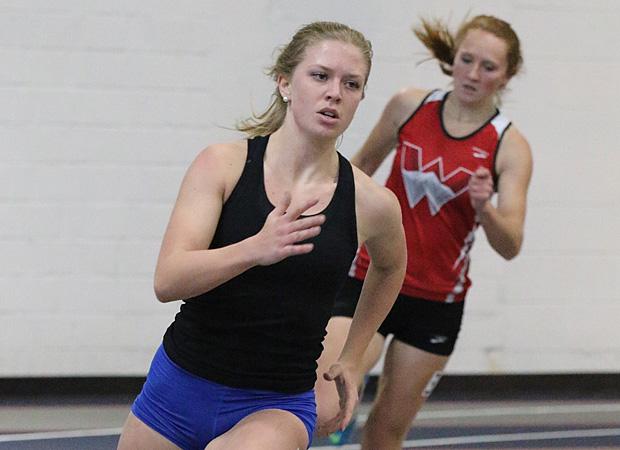 Gianna Tesone hasn't run a lot of 400s in the past, but she ripped off a nice one to open the indoor season at the CSM Alumni Open. Photos by Alan Versaw.

The weather may have deterred a few high schoolers, but for those who showed up, there were plenty of nice marks to be found at the CSM Alumni Open. And, there were the expected issues with shaking off a little off-season rust as well.

Highlighting the day for the high school set among the boys were Kharon Hall with a 20-7 long jump and Connor Roberts pole vaulting to 13-2.5. The mile showdown among the Arvada West boys went to Justin Andrade at 4:51.82. Three of the four A West milers kept it under five minutes.

Representation was a bit deeper with the high school girls.

Dawnielle Lewis made it to finals of the 60 meters and posted a 7.73 there. Amazingly, Maya Evans missed finals with a 7.96. The collegiate ranks at 60 meters here in Colorado are deeper than the used to be.

Mia Coats won a 200 meter dash with the tightest turns she's likely ever to see at 26.40. Vivica Caldwell, whom I believe will show up on some Colorado high school roster this spring, finished second at 26.93.

Emily Sloan picked up where she left off whenever she might have taken a break from hurdling, finishing second in the 60 hurdles at 8.59. Sloan was the lone high schooler to advance to finals in that event, indicating that the college competition locally has gotten better in the 60 hurdles as well. 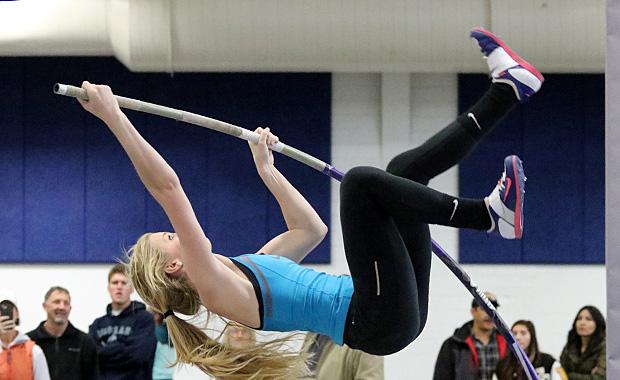 Taylor Alexander (photo, above) was a little better than 11-1 in her second pole vault competition in as many days. Maya Evans and Kiana Gomez were both just a bit beyond 17-5 in the long jump to start the season.