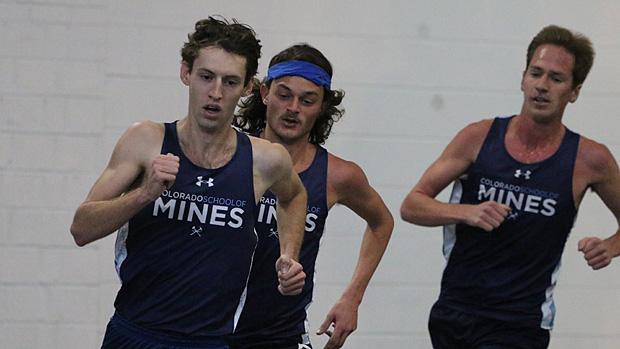 Indoor is the only season where I can even pretend to cover the collegiate scene in Colorado. In spring and fall, there is simply too much going on to even fully keep pace with the high school seasons. But, the high school scene is both a little slower in the winter and often converges with the college scene, anyway.

So, I thought I'd take advantage of this opportunity to fill you in on some of the bright spots revealed for several of the local collegiate programs. I'll make a special effort to shine a light on some Colorado high school alumni in this review.

To avoid any bias, here we'll simply start at the north end of the state and work our way south. And, it should be noted that pretty much every team in the state left a lot of talent at home this weekend. What we see below only scratches the surface.

Colorado State University - It's difficult to say what the biggest news is for the Rams over the weekend, but it's definitely a hopeful sign for Brian Bedard's group that there's so much to discuss. In the 60 meter dash, Leah Fair busted out of the gates with a 7.38 and Josh DeLoach with a 6.65. But, Fair was far from alone on the women's side. Three more joined her below 7.70, including Emily Romo at 7.51. The NCAA will add a few hundredths of a second of altitude adjustment to those marks, but those are still very nice times. Collin Scheer cleared 7-0.5 in the high jump. Autumn Gardner also got her high jump season off to a rousing start with a 5-9.75. Transfer pole vaulter Karly Reimel went 12-5.5 to get Ram faithful thinking about an event they haven't thought much about in years past. Lindsay Read, another transfer--but one with local roots, started her triple jump season at better than 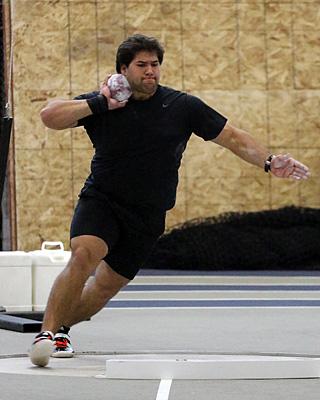 40 feet. Aaliyah Pate picked up where she left off in the spring with a shot put of 54-2.5. Linnea Jonsson, a freshman in from Sweden, spun the 20-pound weight to 57-3. Sam Little posted an 8.08 in the 60 hurdles on Friday night at the Air Force Academy.

The biggest news, however, may come from a young man who wasn't even wearing CSU colors on Saturday. Mostafa Hassan (photo, left) pitched the shot 67-1. He very likely had a better throw than that one, but it got caught up in the netting over the throws area at Steinhauer Field House. You need to show up where CSU is throwing this winter and catch of glimpse of this guy's shot put.

University of Northern Colorado - The Bears split their team between the Wyoming Power Meet and the CSM Alumni Open this weekend. The biggest news out of Greeley would include Francisco Au's 49-5.5 triple jump, Jordan Medina's 50.28 400 on the tight turns of Steinhauer, and Amber Solomon ran 8.26 over the 55 meter hurdles in Laramie.

University of Colorado - The Buffaloes set the record for most meets attended on opening weekend, showing up with representatives in Laramie, Golden, and Colorado Springs. Top performances included a 58-6.5 weight throw for Sophie Hallam-Eames, a 6-9 collegiate opener for Duane McClurkin in the high jump, a 40.22 for Alexandria Peters in the 300, and a couple of nice multis performances for Andrew Ghizzone and Maja Wichart-Donzo.

Colorado School of Mines - Fresh off a cross country national title, and still in pretty decent shape, Phil Schneider, Dan Mahoney, and Marty Andrie each logged provisional qualifying marks in the 5000 meters. Officially, Schneider's time led the way at 14:56, but after adjustments are taken for elevation and an undersized track, some 40 seconds magically disappear off those marks. Courtney Clark opened her college career with a provisional qualifier in the shot put at 44-11.5. Triston Sisneros posted 4900 points in the heptathlon to kick the legs out from under the former Mines school record in that event. That's a provisional mark that probably will not stand the test of time, but it does have Sisneros at #4 in the nation in DII currently, with several opportunities to improve on that mark still coming.

Air Force Academy - With only a few opportunities to shine in events that counted as anything more than a warm-up, the Falcons got a few nice performances at their home meet on Friday. Taylor Smith opened his high jump season at 7-0.5. Dylan Bell currently leads the nation in the pole vault at 17-6.5, but he should be improving on that mark before long. Grant Hamilton's 58-2 in the shot put currently has him among the nation's top ten. Kathryn Tomczak's 12-11.5 in the pole vault is a heady performance for a freshman.

UCCS - With likely the smallest delegation in action of any program in the state this weekend, the Mountain Lions welcomed newcomer Chantelle Fondren with wins in the mile and 3000 at the CSM Alumni Open.

Western State - The big news for the Mountaineers was Keifer Johnson's 8:28.75 winner in the CSM Alumni 3000. After conversions, that came up about a second shy of an auto qualifier. Also scoring provisional marks for the Mountaineers were Cameron Gill in the triple jump (48-9) and Robin Butler in the 800 (1:53.98 before 3+ seconds of conversions). Noah Zorsky added an auto qualifier with a pole vault of 16-10.75. 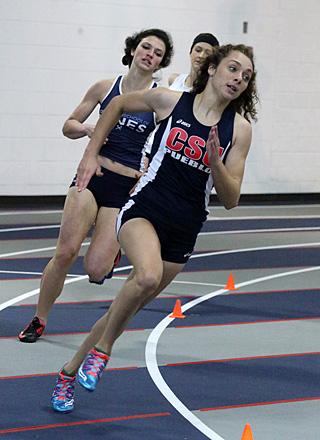 CSU-Pueblo - While part of the future of CSU-Pueblo distance was taking fifth at Foot Locker Nationals, Dueth Vassell was holding onto the turns for a 50.39 400. Marcelo Laguera clocked 4:36.71 for his first collegiate mile. Tatianna Clanton eked her way in the CSM Alumni 60 meter finals and ran 7.91 in a very tough field. Alyssa Evans (photo, left) rolled out a 57.60 400 on Steinhauer's turns. Clanton also won the long jump at 19-1.5.

Adams State - Sydney Gidabuday dominated the field (mostly his own teammates) in the 3000 at the Air Force Holiday Open. His time of 8:37.75 dropped 22 seconds in the altitude conversion and currently has him at #2 in the nation. Chaz Butler and Jurgen Themen ran 6.81 and 6.79, respectively to get in a little early fast action in the 60. Sunayna Wahi was 7.63 fast on her home track for 60 meters, and 26.18 for 200 meters. And the 12:23 DMR posted by the Adams women converts to a provisional mark. Rest assured, however, that the Adams State women will run a much faster DMR mark than that before all is said and done.