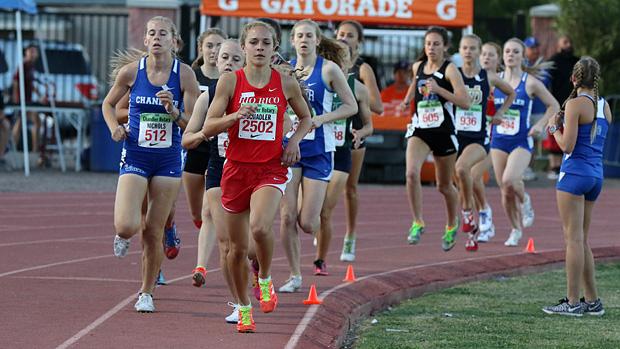 Allie Schadler sets a stiff early pace in the 1600 that would eventually take her to the win. Photo by Alan Versaw.

As has become their long-standing custom, the Chandler Rotary brought in a few top-tier athletes from all across the Southwest region for the 2016 edition of the meet. Evidently, the atmosphere was still not heated enough, so they turned up the burner on the temperatures as well.

The long-standing showcase event of the meet, the invitational 1600/Mile went--to nobody's surprise--Allie Schadler of Rio Rico. Schadler's 4:54.18 beat the field by nearly three full seconds, but not before Baylee Jones fought tooth-and-nail with Schadler through the first three laps.

The boys 1600/Mile covered its ground at a somewhat less historically fast pace, with Logan McKay out of Davis (Utah) taking the win 4:15.07, just a stride or two ahead of Brian Lujan of El Paso Americas at the end. Like Schadler, Mackay led essentially wire-to-wire, but Mackay never gained the kind of separation from the field that Schalder was able to.

Peppered in between those results was a solid count of performances that would qualify as noteworthy at almost any other meet of the season.

I've broken out some results by state below in the pages that follow. Click Next to continue: