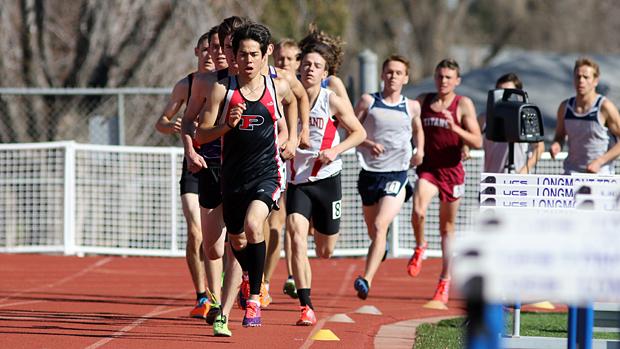 Last year's Longmont Invitational Boys 3200 was but a mere foreshadowing of what this year's race could be. Photo by Alan Versaw.

So far this year, I haven't written many meet previews. In large part, that's been because most of the ones I did intend to write were for meets that were abruptly cancelled. I've been dying to do a decent preview, and it appears that moment has arrived.

I'm pretty sure the Longmont Invitational isn't going to get cancelled.

At this point, the track at little Lyons High School is going to be hosting better than 20 teams (mostly of the 4A and 5A variety), and close to 900 athletes. Fortunately, and if you've been to a cross country meet at Lyons you already know this, Mark Roberts, Jeff Boele, and company have ways of dealing with the crowds. Even so, it's going to get a little cozy out there--at least until the sun sinks below the mountains to the west. At that point, "cozy" might require a mummy bag.

If pole vault is your thing, you get to see Andrea Willis, Erika Willis, and Taylor Alexander all at the same meet.

More inclined toward the 300 hurdles? How about Alex Miller, Tyler Prejean, and Luke Gordley side-by-side in the top heat?

In the 800, Palmer Ridge throws their three sub-2 guys at Marcus Quere. We should get a very nice preview of 4A state in both boys throwing events. The boys pole vault pits Brenton Emmons, Kyle Rex, and Cooper Daniels on the same runway.

The girls 400 features an entire top heat with sub-60 credentials. Katie Rainsberger, Chantae Steele, and Emily Leidig square off in the 800.

I'm not sure what more you might look for in a meet, but if there is more you should find it waiting for you in the featured 3200s. In the girls 3200, top entries include Luna Slater, Lauren Offerman, Holly Bent, Audrey Lookner, and Reagan Hausmann. That doesn't leave a lot of room for error--on anyone's part.

The boys 3200 raises the stakes even further. Toeing the line will be Paul Roberts, Henry Raymond, Isaac Green (that's three NXN individual finalists right there), plus Luc Hagen, Tanner Norman, Max Martinez, Paxton Smith, Connor McCabe, and we're only about half-way through the list of proven sub-10s at that point.

Of this much we are certain--the rankings aren't going to look much the same when this meet is done. All of March has been waiting for a meet like this.

If you can't be there, Colorado Track XC will be putting coverage (to include both photos and video) up as fast as we can in the 24 hours following the meet. This is must-see track and field, folks.

Note: I have had so many problems with live tweet articles that I'm not going down that path, but I will try to tweet out some of the bigger results from tomorrow's meet. You can follow me at @CoachVersaw, or you can simply check my tweet column on the front page of Colorado Track XC!