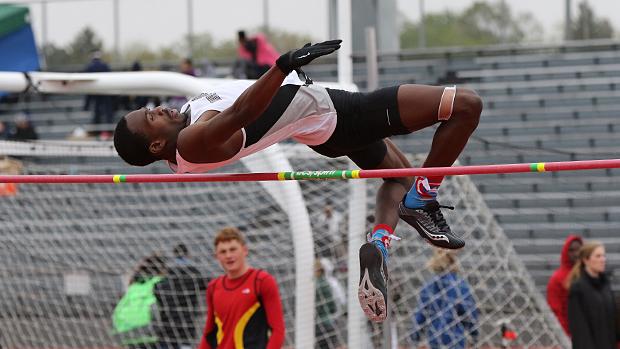 Harrison's Marquez Boykin took the 4A boys high jump at 6-4, assuring his spot in the state field. Photos by Alan Versaw.

Three of the four team titles at this year's Colorado Springs Metro League meet were decided well in advance of the final events. But, the fourth made for a stirring finish.

Following the 200 meters, Widefield held a seven-point lead over The Classical Academy and things were looking bright for a Gladiator team title. Three events remained to be figured into the final analysis--the shot put, triple jump, and 4x400.

First announced were the triple jump results. Harrison's Jaylon Sibley took the win at a little over 43 feet, but TCA was able to make up some substantial ground on Widefield in the event. With no triple jumpers entered, Widefield took a goose egg in the scoring while TCA added five to their total with a fifth from Luke Hall and an eighth from Ben Purvis.

The throws are an area of strength (literally and figuratively) for both teams, but TCA took the lead from Widefield just the same with a winning throw of 51-3.25 for Conor Bertles, a third from Kenny Plant, and an eighth from Tim Gallagher. Widefield's response was a second from Nathaniel Miller.

A league crown was still in sight for Widefield, but pretty much only if TCA DQd the 4x400. That didn't happen. Instead the Titans took two seconds off their season-best time, winning the relay at 3:26.65. Widefield's second-place finish in the relay kept them ahead of a fast-closing Mesa Ridge team for second in the team standings.

Fountain-Fort Carson's boys took their team title in usual fashion--piling up bundles of points in sprints, sprint relays, jumps, and hurdles. Christian Lyon and Donovan Williams did much of the heavy lifting with a pair of 1-2 finishes in the 100 and 200. Malic Bonner added a W in the 400, Derek Schramek a second in the 300H, Kenneth Tate a second in the long jump and a third in the triple jump, and Jequan Hogan a second in the high jump. Perhaps most important of all, the Trojans made a clean sweep of the sprint relays. 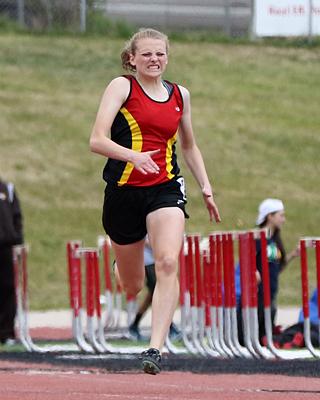 Coronado's well-rounded girls program took the conference title that had belonged to Pine Creek for a few years running. Emily Ambuul (photo, left) helped lead the way with a win in the 300H, a third in the 200, and a second in the 100. Celia Smith did the rest of the leading with a pair of wins in the high jump and long jump, plus a third in the triple jump. Coronado added wins in the 4x400 and 4x800, plus a second-place 800 from Madison Brown. Well before the end, everyone else was having trouble keeping pace.

The Classical Academy's girls took a very large number of wins. And, where they didn't win, they usually found at least a second or third place. The Titans' 4x100 edged their school record down to 49.24. Audra Frieden found new territory in the 300 hurdles at 46.79, Claudia Valenzuela dominated the 100, Chantae Steele claimed wins in the 200 and 400, and RaeAnn Queener and Nicole Daum added a 1-2 in the high jump.