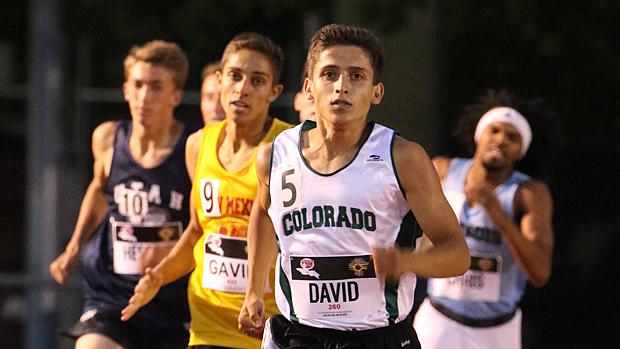 David Moenning put the hammer down on the second lap of the 800 and ran away from the field. Photos by Alan Versaw.

Although Colorado sent a comparatively small delegation to Great Southwest, those who were there made their presence felt.

And, in fact, Colorado made, arguably, the last big statement of the meet when the 4x400 relay team of Heide Baron, Becca Schulte, Anna Hall, and Julia Hall pounded the opposition with a 3:41.78. Even running against all-star teams, that leave second place six seconds in arrears. 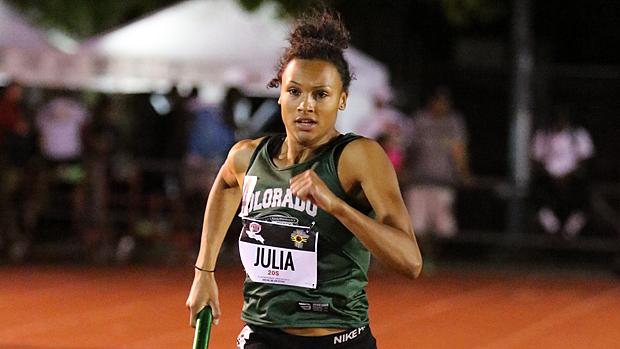 For Julia Hall, it was the end of a long and big day. Hall won the 400 (with Schulte finishing second) in 54.10. And, Hall also took the back straight of a 4x100 relay that finished second only to the top team from Texas.

Similarly, Anna Hall punched in with a pair of sixth-place finish in the 300 hurdles and a seventh in the high jump. Heide Baron added a fifth in the non-elite 200 to her day's places.

Other event winners were few, but the girls in green did manage a couple more.

Kayla Pinnt won the 100 meter competition for all but the top (or "elite") heat, with Maya Evans finishing third.

Amy Migl, who turned 19 just a hair too early to compete in this year's CHSAA season, claimed third in the discus. Sydnee Larkin and Kiana Gomez eked a sixth and and eighth out of the triple jump.

For the boys, pickings were slimmer, as might be expected of a team as small as the one Colorado sent down.

The highlight of the Colorado day would be David Moenning's win in the 800. Moenning came close to his state meet time with an effort of 1:53.01.

Elsewhere, Austin Campbell bowed out of the high jump in seventh. Kent Harris earned a sixth in the non-elite 200. And, Matt Hanson picked up an eighth in the 110 hurdles. Aside from that, though, there weren't a lot of highlights for the Colorado boys.