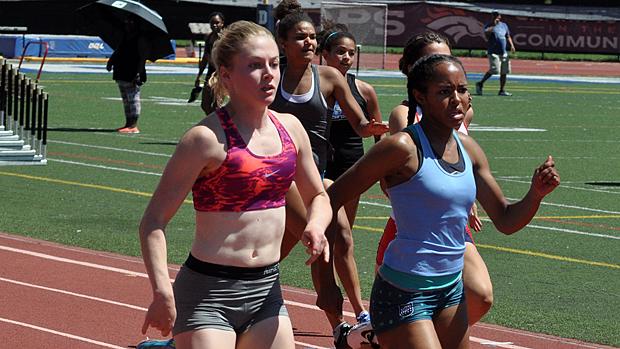 Heide Baron and London Evans were well out in front of the 17-18 Girls 200. Photos by Ben Hershelman.

With Prelims in the books on Saturday, every race on Sunday was for all the marbles. To briefly revisit the conversation from yesterday on what those marbles are, the top four marks in each event automatically qualify for the USATF Region 10 Championships in Albuquerque.

Watching an all ages youth meet is fairly interesting for those who are used to exclusively watching high school and college meets. Since the athletes are divided and seeded by age, spectators can tell where the meet is at based almost exclusively on the height of the athletes participating in the heat. Little ones go first and then the seeding works its way through the tallest of the tall. It would be fascinating to watch all heats of an event on fast forward and watch athletes grow.

Before we discuss Sunday, we would be remiss to not mention the results of the 800m finals on Saturday. No race reveals the fitness of an athlete quite like an 800. If that is the case, then Hayelom Fitsum running for Nite Moves (Denver East) is in great shape this summer. Fitsum blew away any nearby competition with a 1:57.29. Not bad at all for summer.

Some other notable Saturday marks that have not been discussed here previously include Ta'mar Wilson's 21-10.75 in the long jump, Andrew Kline's 47-09.75 in the shot and Audra Koopman's 4-11 in the high jump.

With some intense mid-summer heat on the way, meet organizers made a wise decision in starting both days off with the longest distance races. Marlena Preigh representing Ric Rojas grabbed the first win of the day for the high school aged athletes with a 5:08.67 1500 in the 15-16 age group. Mason Brown running unattached grabbed his second meet title going a strong solo 4:19.60 over Bryce Medaris from Angel Flight. Jordan McCurdy (5:06.68) and Chase Dornbusch (4:21.06) won the boys and girls 17-18 age brackets.

Sarah Yocum, running unattached from Faith Christian, continued to show why she is one of the top athletes in the state. Yocum made good on her #1 seed from Saturday in the 100 hurdles easily taking the meet title in 14.83 over Alexis Buckhaults (15.10) and Semaye Johnson (15.59). Yocum then came back about 25 minutes later and also won the 400 hurdles in 1:04.67.

On the boy's side of the hurdles, Jequan Hogan running unattached from Fountain-Fort Carson won the boys 110s easily in 15.38. Aaron McCoy from Canon City won the 400 hurdles in 54.71 over Anthony Peters from Vista Ridge.

Building on the momentum of the hurdles, the 400 finals did not disappoint. While none of the races were particularly competitive, the individual performances were definitely something to behold. Simone Watkins got things started by taking the meet title in 58.42, about 2.5 seconds ahead of second place. Tyrese VanHorne ran 49.81 to win the 15-16 boys over Tyler Waters 52.87.

Heide Baron posted the most dominant win of the day hitting 55.20 in her final heat over Mariah Gordon at a still tough 59.94. Duane McClurkin, formerly of Fountain-Fort Carson, but now running with the University of Colorado, posted the win the mens 17-18 race. Sunday Abarca ran a tough second place 47.94. 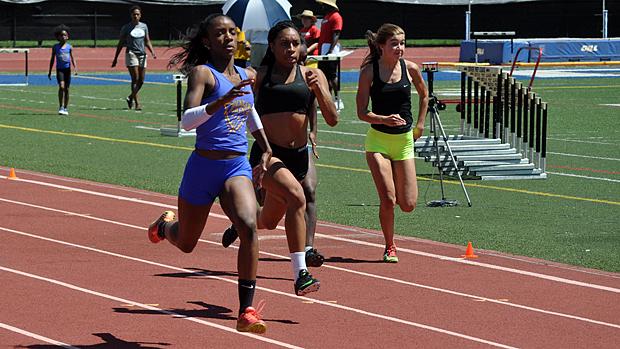 It does not matter what season of the year it is, Arria Minor does not seem to have anyone in Colorado capable of running next to her, only in her wake. Minor posted an 11.89 to win the girls 15-16 100m finals. Minor also won the 200m in 23.82. Right behind Minor in both finals were Dawnielle Lewis and Taylor Watson. All three girls have a date again on the track in New Mexico in a few weeks. Heide Baron beat London Evans for the 100m meet title, but Evans came back a little while later to win the 200m and a fabulous trip to Albuquerque.

Christian Lyon won the 100m finals in 10.50. Generally when Lyon steps on to the track, he is the prohibitive favorite to win. In one of the more thrilling races of the day, Lyon got nipped at the line by former teammate Duane McClurkin in the 200m finals. McClurkin clocked a 21.58 to Lyon's 21.59. Sunday Abarca again ran a tough race taking third in 22.02.