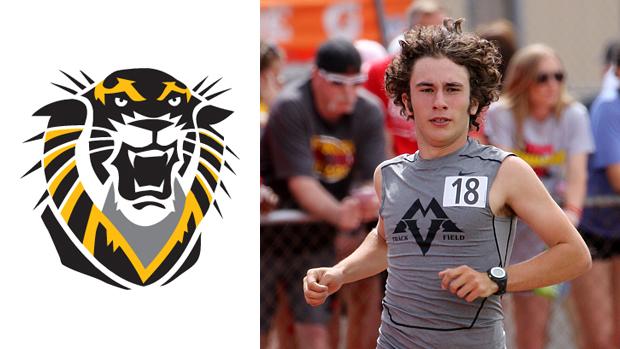 Peter Franklin makes a break across to border to run for Fort Hays State in the fall. Photo by Alan Versaw.

Tell us about the decision for Fort Hays State. What sold you on the program?

What sold me on Fort Hays was that they have a very strong team and an awesome coach.

What will you be studying at FHSU?

I've decided to major in Biology/pre-medicine.

You and Rachel won't exactly be going to the same school, but you'll be plenty close--geographically speaking. Was that intentional, or did it just work out that way?

It was just a cool little coincidence. It actually took me a while to realize we were so close.

You were part of a team that won a state title for Coach Clark in his final season of coaching. Was that a spoken goal among you guys from the start of the season or more something that was understood but not talked about very much? Or something else entirely?

Going in to the season we had high hopes for the team, but we knew if we were going to end up winning we would have to put some hard work in. As the season went on, we had a few trials and tribulations but, with a great coaching staff mixed with a great team, we pulled it together just in time for state.

What event or events do you hope to be able to focus on in college?

I would like to focus more on the 1500 and 3000 in track, along with the 8k in cross country, but I trust my coach to put me where he thinks I will do my best.

If you had to pick a highlight of your high school career at Mountain View, what would that be?

If I had to choose a highlight for my high school track career, it would have to be the whole state meet trip. The whole team gets to hang out for three days while competing against some of the best athletes in the state. By the time we head home, everyone is exhausted but still trying to celebrate a great season. Both the coaching staff and athletes made it an awesome experience.