In case you missed it--though a very large number of folks didn't miss noticing--the #4 girls individual qualifier out of the Nike Southwest region is an 8th grader.

But wait, we're not done yet with the twists and turns to this story...

Up until this year, Grace Ping lived in Minnesota, where 7th graders may participate as members of high school sports teams. Ping ran cross country and track last year for Cotter High School in Winona, Minnesota. In fact, she also ran at Nike Cross Heartland last year where she finished third, advanced to nationals, and finished 14th there.

In short, this all means that Ping is on track to become the first-ever six-time participant in Nike Cross Nationals history. But, let's get back to the more pressing question of this story...

There was a time when participation rules for Nike Cross Regionals included a statement about being eligible to have competed for your school in the fall. Significantly, that cost a potential runner from Xavier College Prep in Arizona a spot on her team and in the Championship race at the 2009 Southwest regional.

The rules have been rewritten and relaxed somewhere between 2009 and the present. 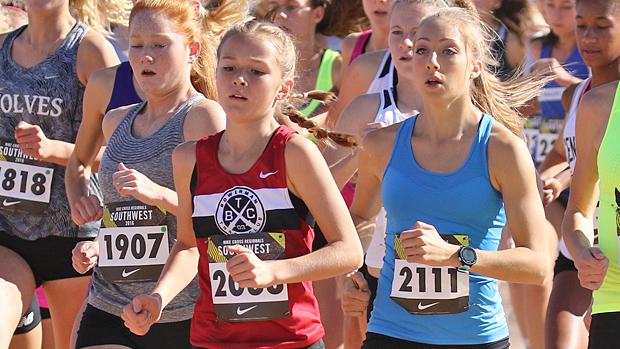 Grace Ping sets up at the front of the pack early in the Girls Championship race at Nike Cross Southwest. Photo by Alan Versaw.

At present, the Nike Cross Regionals eligibility rules say nothing that would preclude much of anyone who has not yet graduated from high school from participating. The rules do use the word "teenager," but do not otherwise specify academic standing except to say "on track to graduate" from high school.

Given Ping's performance from NXN 2015, it's not hard to see why she would get a pass into the NXR-SW Girls Championship race even without any high school meet performances of record for the 2016 season.

The more troubling question, however, concerns what kind of precedent it sets for an 8th grader who is not high school competition eligible to be allowed to participate in a Nike regional meet.

Here's what we can say:

Nike Southwest meet director Jeff Guy explained, "Ultimately Nike will make the final decision about Grace Ping since this is their event." That much is certainly true, but Nike could also discover that a decision to allow Grace Ping to compete implies permission for other, similarly qualified, athletes to compete down the road as well.

There are enough gifted athletes of middle school age that it seems only a matter of time until the precedent established on Saturday gets tested in more profound and pervasive ways.

Perhaps another unintended consequence of the decision to allow Ping to run is to jeopardize any down-the-road possibility of the Nike regional and national meets to be recognized as NFHS events. Having these events bearing the NFHS imprimatur would pave the way to easy approval for teams and athletes from all states participating in the events (and would similarly do away with the need for club names to participate in the event in the first place), but putting an 8th grader from a state like Utah on the starting line of one of these races endangers the trust and understanding needed for that kind of approval to move forward.

This could be construed as an indicator that Nike has chosen to go their own way on this path and is no longer strongly motivated to forge an alliance with the NFHS over their series of cross country meets.

A Note From The National Editor: What do you think? Should middle schoolers be allowed to compete at NXN? Comment below or tweet @milesplit using the hastag #SUB4 and we may use your response in an upcoming video show.