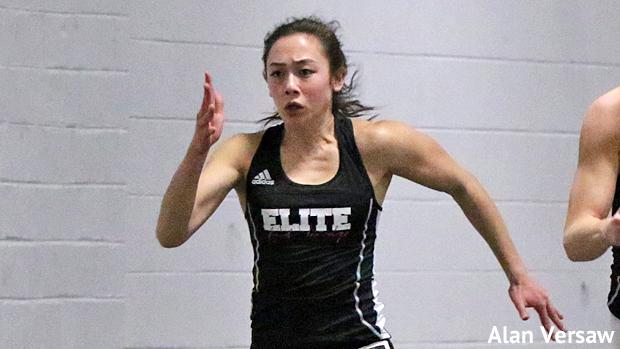 Abigail Tamminga makes herself a bit harder to overlook with each successive meet. File Photo

Even though I wasn't at this year's running of the Tony Wells Memorial, it's definitely worth me taking the time here to make note of a few of the performances that went down.

A nice little showdown in the 400 between Arria Minor and Anna Hall went Minor's way, but not without both of them seeing the south side of 57 seconds. That's pretty quick for an indoor track--even an oversized affair like we have at the Air Force Academy--for this early in the season.

Anna Hall also edged her season-best high jump mark to 5-7.25, while Minor got a second win in the 60. Hall's high jump clearance marks back-to-back weekends with a new PR in the event.

Maya Evans went back to back meets over 19 feet in the long jump, taking the win at 19-2.75. Emily Sloan trimmed a few hundredths of her best 60H mark of the season with an 8.45. Emma Dern pushed the shot put out beyond 38 feet for the second time this season.

With Arria Minor taking the 200 off this weekend, Abigail Tamminga seized the opportunity and posted the fastest 200 of the day with a 25.10.

Over among the boys, Cal Banta's 2:01.65 800 gets a few second looks. It probably helps a little that Oscar Martinez was just off a second behind Banta and helped keep the pacing honest (always a plus in the 800).

Nolan Kembel got very close to the first sub-50 400 of the season. Kembel also joined Paulison Fosu, Angel Heredia, and Jequan Hogan in a near-dead heat of the 60 hurdles, with all four finishing within a couple hundredths of 8.50.

Max Manson made a major improvement in the best Colorado pole vault mark of the season at 15-8.25. If you saw his vaulting on Thursday night, you had to suspect that was coming sooner or later. It was really just a matter of putting the vertex of his parabola over the bar instead of a foot in front of the bar. In case you're keeping score, that advances Manson's PR by 1.25 inches and puts him atop the sophomore class nationally.

Devin Cadena and Aaron McCoy won the 60 and 200, respectively, but the biggest news there may have been McCoy going decisively under 7 seconds in the 60 at 6.90.