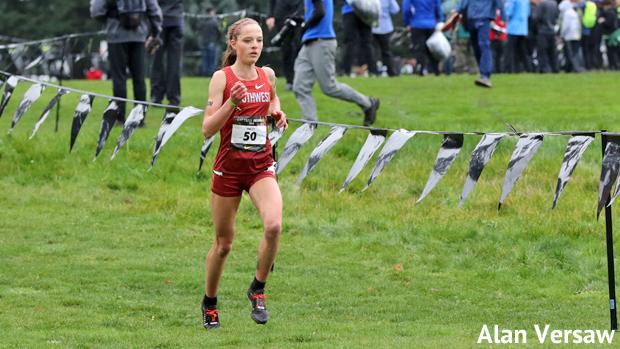 Brie Oakley's season finished with the largest-ever margin of victory at Nike Cross Nationals.
CHICAGO (January 23, 2017) -- In its 32nd year of honoring the nation's best high school athletes, The Gatorade Company, today announced Brie Oakley of Grandview High School as its 2016-17 Gatorade Colorado Girls Cross Country Runner of the Year. Oakley is the first Gatorade Colorado Girls Cross Country Runner of the Year to be chosen from Grandview High School.
The award, which recognizes not only outstanding athletic excellence, but also high standards of academic achievement and exemplary character demonstrated on and off the racecourse, distinguishes Oakley as Colorado's best high school girls cross country runner. Now a finalist for the prestigious Gatorade National Girls Cross Country Runner of the Year award to be announced in January/February, Oakley joins an elite alumni association of past state award-winners in 12 sports, including Lukas Verzbicas (2010-11, 2009-10 Carl Sandburg, Orland Park, Ill.), Megan Goethals (2009-10, Rochester, Rochester Hills, Mich.), Jordan Hasay (2008-09, Mission College Prep., San Luis Obispo, Calif.) and Chris Derrick (2007-08, Neuqua Valley, Naperville, Ill.).
The 5-foot-4 senior raced to the national title at the Nike Cross Nationals Final this past season, breaking the tape in 17:10.1. Oakley also won the Class 5A individual state championship with a course-record time of 17:07.83 and the captured the NXN Southwest Regional championship in 16:56. She was unbeaten on the season, also setting course and meet records at the Woodbridge Classic and the Liberty Bell Invitational.
Oakley has volunteered locally on behalf of the Aurora Public Library. "I've had very competitive, talented runners before in our program, but Brie is simply at a different level," said Grandview coach Allyson Robbins. "She has the whole package. She is a physical phenomenon, her mental strength is unparalleled and her discipline pertaining to the details of becoming a champion are constant and unwavering."
Oakley has maintained a 4.60 weighted GPA in the classroom. She has signed a National Letter of Intent to compete in cross country and track and field on scholarship at the University of California Berkeley this fall.
The Gatorade Player of the Year program annually recognizes one winner in the District of Columbia and each of the 50 states that sanction high school football, girls volleyball, boys and girls cross country, boys and girls basketball, boys and girls soccer, baseball, softball, and boys and girls track & field, and awards one National Player of the Year in each sport. The selection process is administered by the Gatorade Player of the Year Selection Committee, which work with top sport-specific experts and a media advisory board of accomplished, veteran prep sports journalists to determine the state winners in each sport.
Oakley joins Gatorade Colorado Girls Cross Country Runners of the Year Katie Rainsberger (2015-16 & 2014-15, Air Academy High School), Elise Cranny (2013-14 & 2012-13, Niwot High School), Jordyn Colter (2011-12, Cherry Creek High School), Kelsey Lakowske (2010-11 & 2009-10, Boulder High School), Allie McLaughlin (2008-09, Air Academy High School), and Kaitlin Hanenburg (2007-08, The Classical Academy) as athletes who have won the cross country award since its inception in 2007.
As a Gatorade Player of the Year, Oakley will be able to select a national or local youth sports organization to receive a grant as part of the Gatorade Play It Forward program. Every Gatorade Player of the Year state winner receives a $1,000 grant to donate and will have the opportunity to enter for an additional $10,000 spotlight grant by writing a brief essay explaining why their selected organization deserves additional support. 12 spotlight grants -- one for each sport -- will be announced throughout the year.
To keep up to date on the latest happenings, become a fan of Gatorade Player of the Year on Facebook and follow us on Twitter. For more on the Gatorade Player of the Year program, including nomination information, a complete list of past winners and the announcement of the Gatorade National Player of the Year, visit www.gatorade.com/poy.