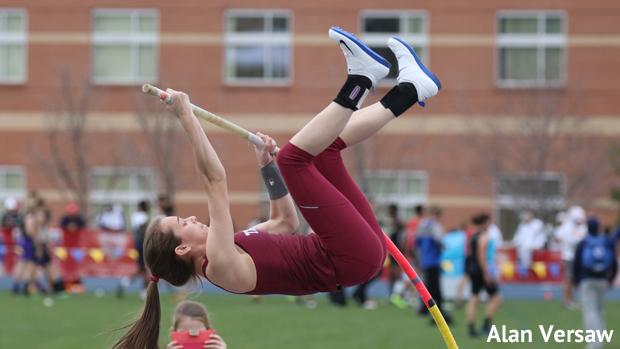 When Erika Willis takes aim at the 3A girls pole vault record this spring, there could be a little bit of emotion on the line.

We'll eventually get through all classifications with this series, but it starts here and now with 3A.

Of course, there could be additional ones in imminent danger that we don't really know about yet. All I have available to work from here are last year's results and the indoor results from this winter just gone by. Who knows if there's another phenom waiting to be introduced this spring?

And, before you get too far, you might like to take a look at the existing 3A records. I've linked that there for your convenience.

The existing record state meet record belongs to Beth Jones of Eaton at 18-2.75. The existing 3A classification record belongs to Tiffany Kenney of CSCS at 18-10. But, with Maya Evans enrolling at 3A Lutheran this spring, this classification record doesn't figure to last any longer than Evans' first meet in the CHSAA-sanctioned season. Evans has gone over 20 feet repeatedly and is a regular at distances over 19 feet.

This one isn't the kind of slam dunk that the long jump appears to be, but it's definitely in danger nonetheless. Cedaredge star Sierra Williams holds the existing record at 11.82. Evans has a PR mark of 11.79. So, it seems likely--though something short of a guarantee--that Evans eventually finds the right conditions and gets this one, too, sometime this spring.

It's not all that often that you set a record one year and get a chance to come back and lower it again the next year, but such is the opportunity Yocum is staring down. Without help of close competition to push her, Yocum recorded a 42.45 at State last spring. If Yocum stays healthy this spring, that could fall.

This one falls under the same category as Yocum's 300 hurdles record. Sieg set the new standard last spring at 46-6.5. You have to figure her arm should be stronger this spring than last. It seems only a matter of time.

Sieg already owns the classification mark for this one at 149-8. Hannah Carr of TCA owns the state meet record at 143-9. Sieg could easily unify the record again this spring, but discus is a lot more fickle that shot put. And, the state meet record affords you a grand total of six throws to knock day the record, with no guarantees about conditions being a help or a hindrance.

Breaking this one might be bittersweet. To take down the existing 3A record, Erika Willis must oust her older sister Andrea from the board. Andrea's 3A record is "only" 11-6, and Erika has several successful ventures beyond 12 feet on her resume. The standing record doesn't seem to be long for this world.

You would think that Sunday Abarca seems like a logical candidate to break his own record, but this one could be on hold. Abarca does not currently show as an active athlete on the Aspen High School roster. So, we'll wait to see what comes of this. However, if Abarca isn't around this spring to wrestle with his own record, Jared Keul of Manitou Springs just might be bringing the goods necessary to get it done himself. The record is 48.54, and Keul ran a best time of 48.66 last spring. So, one way or the other...

The existing record belongs to Denver Christian's Bret Schoolmeester. When Schoolmeester set the record, it seemed impossibly far out there. Nobody in 3A was getting remotely close to Schoolmeester's standard. Tanner Norman, however, ran 9:22 and change last spring and only needs four more seconds to set the new standard for 3A. If he gets it, he will break one of the oldest 3A records on the board. This one has lasted 16 years, so far.

Like the girls long jump record, this one might fall the first meet of Mayes' season. That won't be this weekend, however, as Mayes is off in New York City to compete at New Balance Nationals Indoor. But, for someone who has already gone 16-0, a 15-1 record doesn't seem to present a whole lot of an obstacle. The existing record belongs to Truitt Parrish of Sterling, but probably not for long.