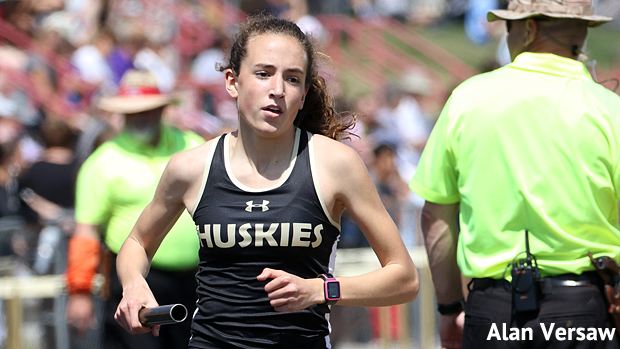 Lizzy Harding is part of a long line of Battle Mountain Huskies who can put a race out of reach in a hurry.

Typically, Battle Mountain is a better cross country team than a track team. That could have a lot to do with their habit of running up and down mountain slopes (where else would you find to run in the Vail Valley?) all summer long and the somewhat Spartan conditions for training in a place where spring comes a bit later than it does across most of the state.

In any case, Battle Mountain looks a lot like your early favorite for this fall's cross country season, and that has a lot more to do with what we saw last fall than what we saw this spring.

Battle Mountain is relentless on the cross country course down the (somewhat flexible) order of Lizzy Harding, Naomi Harding, Elizabeth Constien, Alex Raichart, Kaela Fahrney, Grace Johnson, and Megan Bamford. And, there are others who could conceivably bust into the varsity seven as well.

That situation falls under the general heading of "a good problem to have."

Though we acknowledge that things generally go better for Battle Mountain on the course than on the track, it's not like things went terribly on the track this spring. Both Hardings and Constien were 5:12 or better for 1600 meters this spring. Johnson and Raichart were just over 5:20. Constien, Lizzy Harding, and Johnson were sub-12s in the 3200 and Fahrney barely missed that distinction.

Right now, you can look high and low in 4A, but you won't find a team--at least not from what we've seen to date--that has the firepower to run with Battle Mountain. The Huskies are not quite the prohibitive favorite that Peak to Peak is in 3A, but they're a solid favorite just the same.

Figure that Battle Mountain pops over onto the front range a time or two during the invitational season to give us all a look at what to expect for State.