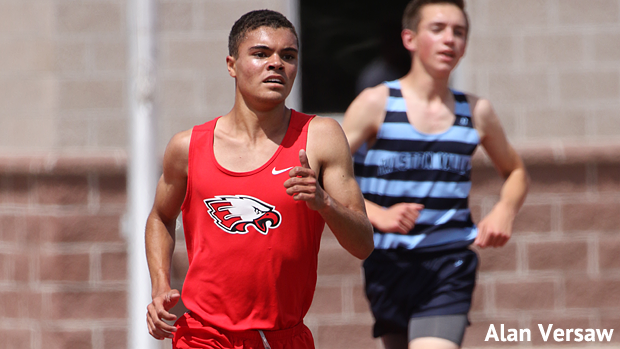 Mason Brown seems to be fully back on track now and should be the boys individual favorite as last year's top returning finisher.

They're an impatient lot of people, those ADs and cross country teams out in Aurora.

Before any other league, classification, or other entity decides anything for this fall, Aurora will be crowning a boys and girls city championship. And then on to bigger things.

Last year, Grandview made a clean sweep of the city titles. Well, sort of...

The Grandview boys won fair and square. The Grandview girls won by unofficial acclamation when lightning stopped the race short. Of course, Grandview did have five of the seven girls across the line at the moment lightning declared a premature end to the contest. Lightning can be emphatic that way.

This year, Grandview--even without Brie Oakley--stands as a clear favorite to make last year's unofficial girls city title official. That is, of course, assuming that they put their varsity team on the course--it's not a universal thing that the Aurora schools do that for this meet.

Offhand, I'd say Grandview also checks in as the favorite on the boys side, but probably not by the same kind of margin as they will be with the girls. Smoky Hill figures to have something to say about the boys outcome. And, if you recall, Overland brought a very young team to the table last fall, one that only got stronger as the season went on. It's probably a mistake to count Overland out of anything this soon.

And, as a sidebar, Overland is under a new coaching regime this fall.

Individually, barring auspicious debuts of any unaccounted-for freshmen, the girls team title could be a nice little showdown between Caroline Robbins, Kaitlyn Mercer, and Isalina Colsman. I'm inclined to think Eaglecrest's Mason Brown counts as the favorite in the boys race, but any others are welcome to prove me wrong if so inclined.