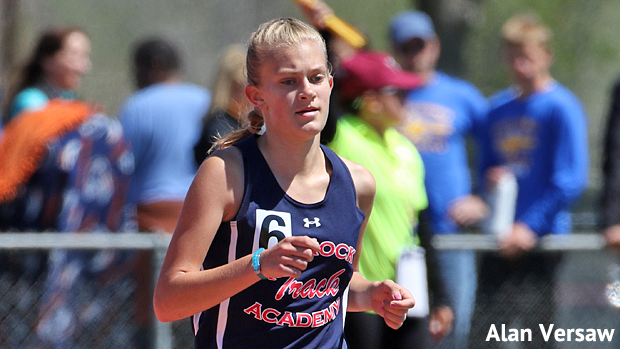 Trying to wedge in one more article before I need to leave for the Cheyenne Mountain Stampede...

Coming to the meet are first-year program Caprock Academy, DeBeque, Delta, Olathe, Meeker, and the four Grand Junction area 4A and 5A programs.

As you may recall, Caprock Academy sent freshman Elise Wilkens to the 1A state meet this last spring where she placed 5th in the 1600 and 3rd in the 3200. Wilkens has seen larger school competition before, but probably never in the density she will see it on Saturday. She could easily end up as a big part of the story of this meet.

Central's Ivory Espinoza and Junction's Makayla Moran should be the ones most in Wilkens' sights if she aims to take the win.

It's a very dicey business projecting a team winner here, but Grand Junction and Fruita Monument are probably your two safest bets. A lot of Western Slope programs are in rebuilding mode this fall, and those programs seem to be especially concentrated at this meet.

Over on the boys side, I'm guessing we will likely see a close finish between Aaron King of Grand Junction, Dalton Haraway of Fruita Monument, and Tyman Smart and David Cardenas of Central (something for each of the big Grand Junction schools to be rooting for). If he can successfully adjust to the heat of Matchett Park from the cool of Box Canyon Falls, Cooper Rondinelli could find himself in the hunt as well. Olathe's Garrison Paniagua, who had an impressive freshman campaign last fall, is not listed among the varsity entries.

Based on who and what's coming back for each of these programs, prospects are good for Central's boys starting the season with some first-place hardware.

Ouray has seven boys entered in the meet--an impressive tally for a small-school program such as Ouray--and this meet could tell a lot about just how competitive the Trojans will be this fall in the 2A ranks.