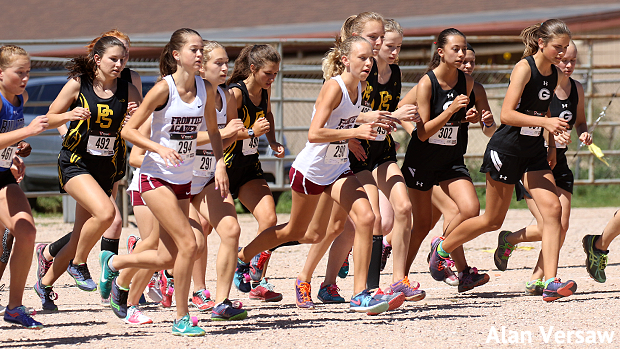 The Stampede was a bit slower this year than last, but why?

It didn't take too much reflection to settle on the idea, "Hey, last year's edition of the Cheyenne Mountain Stampede ran faster than this year's."

Perhaps your first big clue came with the top boys times. Last year, nine boys ran 16:30 or faster. This year, only two made the cut, and those just barely.

"But," you object, "weren't Ian Meek, Ethan Powell, and Max Martinez running last year? Doesn't the fact that we had an unusually good top end of the senior class last year count for something?"

Well, maybe it does, so let's digger a little deeper together.

There were 11 girls who ran 19:40 or faster last year and only seven this year. But, couldn't that just be random variation? Yes, it could.

To make this kind of determination we need to look at larger slices of the field than just the count of competitors who ran faster than some arbitrary time (even if that may have been what caused up to ask the question in the first place). So, I asked one of the MileSplit tools to gin up some numbers for me. Here's what we get when we look at the average times for the top 100 and for the entire field from last year and this:

This counts as anecdotal evidence for a pet theory of mine that girls tend to be more impacted by heat than boys are--at least so far as cross country races are concerned--but the larger question remains, "Why would 2017 be so much slower than 2016?"

We could make and test several hypotheses. I've collected a small handful of hypotheses below.

Let's take a look at each hypothesis in turn.

1. This hypothesis breaks down pretty quickly once you notice that the teams attending in 2017 and the teams attending in 2016 are largely the same. Like most meets, the Stampede has by now established a regular clientele of teams. Some are a little weaker and some a little stronger this year, but the teams are largely the same from last year to this. If anything, this year's Stampede had a slightly higher percentage of 4A and 5A teams than last year. That would tend to make the overall field faster rather than slower. The one high-powered team that stands out as present last year but absent this year is Silver Creek. Silver Creek's absence this year didn't produce the magnitude of change you observe from last year to this.

3. The course was slightly different this year. But, going around the south side of the indoor arena rather than through it should be pretty close to a net zero on the time differences. The rest of the course was the same (plus or minus maybe as much as a few feet on start and finish lines). Let's say, to be charitable, that the course change might have accounted for as much as two or three seconds of delta in the times.

5. Well, that is theoretically possible, but it's also a little early to be making that call.