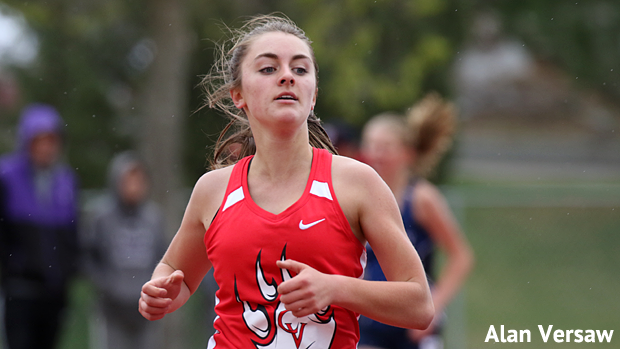 Erin Kraus was fifth at this meet last year; can she make the move to first this year?
Okay, so who wouldn't want to run a cross country race in Washington Park? I hate to think how many running miles I logged in Washington Park when I was a college student. It remains the showpiece city park in all of Colorado today.

Among the most interesting programs--and especially interesting where boys programs are concerned--lining up for this meet are Castle View, Dakota Ridge, and Denver South. These rank as three of 5A's most up-and-coming programs.

For Castle View, it's an outstanding freshman class and one of last year's top freshmen in Aidan Scott that are making this team look like a pretty serious team of the future. For Dakota Ridge, last year's team of the future is this year's team of the present. DR acquitted themselves well against stern competition at Vista Nation last weekend. The Eagles have to believe this one is a winnable meet. It does appear, however, that DR is holding at least a few of their top guns out of this meet. For Denver South, it's a team led by Yonatan Kefle and creeping ever closer to being a team that goes five-deep well enough to be a serious force in the 5A ranks.

Individually, a meet that could be a nice showdown between Harrison Scudamore and Austin Vancil finds neither on the list of entries. That would appear to push Yonatan Kefle into the status of the guy on the spot here. William Merrick at Castle View and perhaps Ryan Lehmuth of Jefferson Academy could get into the thick of things here as well. And, honestly, though Aidan Scott didn't have a great race last week, he could be a serious player here as well.

Turning our attention to the girls side, Dakota Ridge also appears to be holding their top girls out of this race. That could push Brighton's Kiran Green into the role of individual favorite. She is at least among the possibilities. Castle View's Erin Kraus owns the best time coming in from this season and figures among the favorites as well. Perhaps George Washington freshman Delaney Gilfillan makes her own bid for the individual crown here.

Teamwise, with Dakota Ridge evidently unloaded, my hunch is that favorite status passes to Castle View. Denver East has the talent to challenge, but, like Dakota Ridge, the Angels don't appear to be bringing their top runners to this meet.

The Washington Park Invitational is still a young meet. It's appeal should be obvious, but building this into a top-tier meet is going to take a gradual process of a few more teams each year being willing to put top kids on the line for this meet.