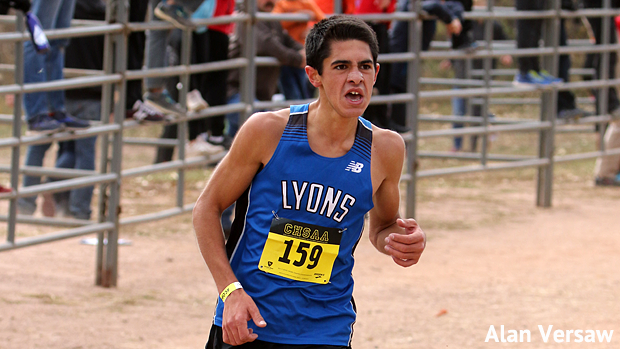 If you aren't already accustomed to watching Lyons at State, it takes some getting used to.

Catch up with the Lions at 1000 meters and you'd swear they're all out for a leisurely jog, like they have collective amnesia and have lost all awareness of what race they're running in. Find them again and 4800 meters and you'll wonder what manner of magic potion it is they found out there on the course.

Lyons' strategy of lay-back-and-wait works exquisitely for 2A cross country. It's application might be somewhat more limited in the larger classifications, but Coach Roberts has it down to a fine art for 2A.

Memories of Paul Roberts aside, you won't often find Lyons jockeying for top positions early in a race. But all that energy they conserved early always seems to find an outlet during the race.

And so it is that Lyons has, once again, to scrounge to find room for another big, shiny gold trophy in their trophy case. If you're keeping track, that's five of the last six 2A Boys trophies that Lyons is warehousing.

Going in, there was only one team that figured to serve as an effective roadblock to the march of the Lions. Heritage Christian Academy had gone back and forth with Lyons throughout the season and was the lone team with a reasonable hope of pitting strength against strength and prevailing over Lyons.

It was a very nice show and all, but not quite enough to catch Lyons. The final tally had Lyons with 18 and Heritage Christian Academy with 25. Rocky Ford was a distant third with 46. Mancos and Sargent rounded out the top five.

If the 2A Boys team race took its time to show its colors, the individual race did not. Before the race had crossed the bridge to the Bear Creek Regional Park side of the course, the list of contenders had narrowed itself to four--Micah Zeller of Custer County, Cody Danley of Rocky Ford, Ethan Reschke of Sargent, and Ben Kelley of Soroco.

Shortly thereafter, Kelley was a crowd of one at the front. And, make no mistake, Kelley can be a very imposing crowd of one. Sharing the lead with Danley at the mile, Kelley had a margin of 10 seconds (over Isaac Roberts) at two miles, and eight seconds at the finish. But for Roberts, that gap on second would have been more on the order of 30 seconds. Kelley took 16:06 to complete the win.

Presumably, Roberts becomes a substantial favorite for next year's individual title. And, yeah, Lyons figures as the team to beat next year, too.