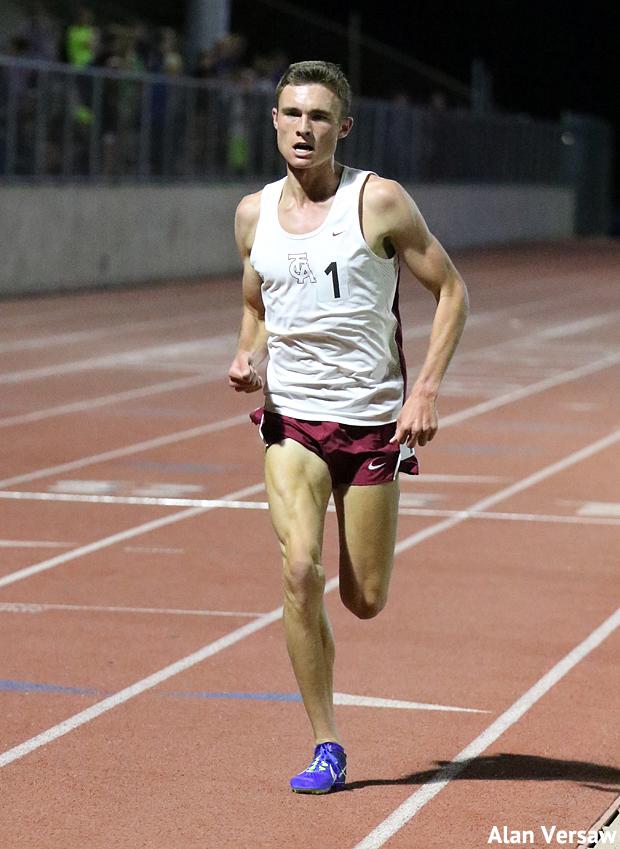 Tanner Norman had the advantage of running under the lights in Pueblo, he had the disadvantage of chasing the record in an almost entirely solo effort.

Ever since Brent Vaughn established the new all-classification 3200 record of 9:05.89 on May 17, 2003, it was a target to be measured by. Folks who never face the challenge of running a 3200 at altitude have no idea why or how it can be so difficult to approach 9 minutes in this event.

The list of those who challenged Vaughn's mark and came up short reads like a who's who of Colorado high school distance running. Those who, at one time or another, came within 10 seconds of Vaughn's mark include Kevin Williams, Evan Appel, Connor Winter, David Perry, Paul Roberts, Cerake Geberkidane, Richard Medina, Bradley Harkrader, Scott Fauble, and Wes Rickman.

All gave it their best shot; all came up short. Only Williams, Appel, and Winter ever came within five seconds of the record. Almost all on the list had carefully orchestrated their opportunities to be able to put maximum effort toward breaking Vaughn's record.

Vaughn's record was taking on an air of invincibility. And not without good reason.

After a very successful senior cross country campaign, Tanner Norman set his sights on a few goals. Among those were running sub-9 for the 3200, somewhere, and taking a shot at Vaughn's record at the 2017 Pueblo Twilight.

The first of the two goals came within a second of falling at the Texas Relays. And, that only served to harden the resolve of conquering the second.

Prior to the race, Norman and Palmer Ridge's Jeremy Meadows agreed to trade off lead responsibilities for a few laps to ensure the race got off to a fast enough start without heaping all of the burden on any one competitor's shoulders.

Norman clicked off the first lap a little ahead of schedule. Meadows returned the favor on lap two, on schedule.

On lap three, though, it became apparent that if Norman was going to break the record, the rest of the race would have to be on his own. There was no exchange for lap four.

Norman pushed through the midway point at almost exactly half of the time required to break the record. On the one hand, that was good news. On the other hand, it meant he would have to average faster for the last four laps than he had for the previous two.

Norman keep himself within striking distance of the record through the next three laps, keeping his lap splits close to 69. At the end of lap seven, Norman was at 8:01 and change. A 64-second final lap would secure the record. Norman clipped it off in 63.

At 9:04.97, Norman had shaved almost a full second off Vaughn's record.

The entire 3200 field took a cool-down run together into the Pueblo night to absorb what had just taken place. Great records die hard.