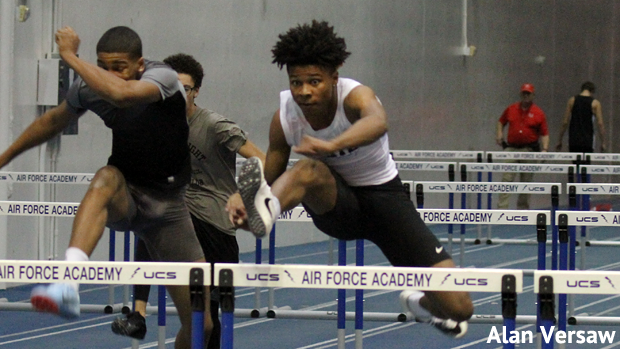 Zion Gordon just might be one of the fastest 60 hurdlers in the nation, but he still figures to get tested Friday and Saturday.

Online registration for the Air Force High School Open closes today. Day-of-meet registration will be taken, but at a hefty additional fee.

Things are shaping up nicely at the moment for a very competitive meet. Most notable among the "missing" entries right now are any from Denver Lightning.

Even without Denver Lightning entries in the fold, though, there are nine sub-8 girls entered in the 60 meters. Devin Cadena is entered but does not currently hold the top seed among the boys. You could make the case that he should hold the top seed, but either there's some serious bluffing going on or we're about to see some very exciting racing. Probably a little of both.

At this point, Jaiden Paris does not show among the girls 60 hurdles entries, but the rest of the state's top hurdlers all show on the list. Kenney Broadnax is coming up from Texas to test Zion Gordon and Cameron Harris a little in the boys 60 hurdles.

Taylor Savolt is coming from Kansas to do battle with the FK Elite triple jump circus. If Savolt can master the springy runways, it should mean a big PR for her and perhaps some of the best outside competition FK Elite has faced all season.

Neither of the Mansons appear on the entry list yet, but George Gardner--a 16-footer out of Missouri--is waiting for Max if he shows up.

Mayson Conner is a 7-foot high jumper out of Nebraska. His presence might tip the scales for Jequan Hogan to enter in case Hogan is playing wait-and-see.

Anna Hall and Riley Masten don't need any outside competition to make for a great high jump showdown.

Jake Merrell is coming out of Texas with a 1:51.56 PR in the 800. That might suffice to take the pace out fast enough to get a few Colorado boys under two minutes for the first time this season. Aden Baughman out of Oklahoma is another who can certainly push the pace. Landon Rast and William Dixon, are you ready? Because opportunity is knocking at the door.

There's a flood of sub-2:20 types in the girls 800. It looks like a wide open race. The old cliche about who wants it most should apply here.

AJ Kedge is coming up from New Mexico to challenge Cole Sprout in the mile. Kedge? Kedge?! Where have I heard that name before?

It's a really, really good girls two mile field. But, you're going to have to show up on Friday evening to find out who all is included. You won't go away disappointed. Nobody as fast as Brie Oakley was last year (not that that narrows things down much), but a much deeper field than last year.

Blaine Grant is a certified 22-foot-plus long jumper out of New Mexico coming up to tangle with the likes of Zach Reid and Aaron Harris. Ryan Bornemeier out of Texas is another with very similar credentials. Someone better order some longer rakes for the pit.

And, all of this is just a teaser. There's still more than 24 hours of online registration remaining. It should be a grand show! I'm warming up my camera right now.

And, if you can't be there to see it, you can watch the MileSplit live stream (link coming soon)!

UPDATE: In the last 16 or so hours since I wrote this article, a number of prominent entries have been added to the list. Among them, Arria Minor, Kyairra Reigh, Max Manson, Mia Manson, and Sadio Fenner. No doubt we'll still see a few more in the hours that remain, plus a handful on Friday and Saturday. And, I haven't hinted much at it yet, but a lot of the best of western Colorado is coming over for this meet as well. Wyoming entries--of the most exciting kind--are trickling in as well.