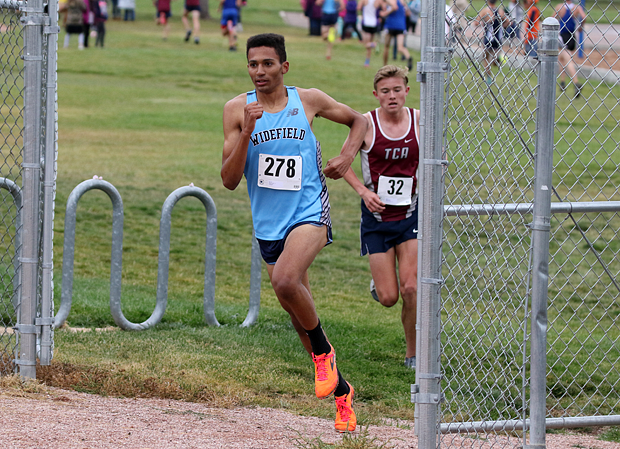 By the gate that led back to the ditchbank trail, Ryan Outler had made his decisive move into the lead.

For 5A Boys, the 44-62 score between Pine Creek and Palmer made it seem closer than it actually was. About Palmer's Gus McIntyre crossed in second place, control shifted quickly and dramatically in the direction of the Eagles.

Brothers James and William Hibbard and Jackson Ponce de Leon gave Pine Creek three in the top eight without an answering shot from the camp of Terrors.

Max Robinson did briefly bring Palmer back into the discussion at #10, but the discussion soon ended with Caleb Boutelle and Sean McCauley going 12-15 for the Eagles.

44 seemed to be the point total of choice for top teams. While Pine Creek's 44 was enough to go unchallenged for the 5A win, things weren't nearly so simple on the 4A side. Two teams posted 44s in 4A.

The 4A and 5A races are run together but scored separately at the CSML meet. That makes it especially difficult to discern how the team battles are going, but this one would have been difficult under any circumstances.

Widefield and The Classical Academy have a history, going back a few years now, of some tight battles on the boys side. This one ratcheted the history up a notch.

TCA had three in the top ten with Mason Norman (2), Nathan Bone (5), and Ryan Flaherty (10). Widefield did one better with Ryan Outler (1), Jon Cabrera Santos (6), Miles Mena (7), and Brandon Williams (8). TCA was able to make it a contest again, however, when Josiah Cole and Brendan Johnston got in well ahead of Widefield's 5. Nathaniel Brim tilted the scales in the Titans favor with the tiebreaker at the #6 scoring position.

Individually, the race very quickly resolved into a two-person battle between Norman and Outler. Norman led the first half of the race and Outler the half of the race that counted in the scoring. Ben Conlin and Gus McIntyre were easily the top finishers on the 5A side but well behind Outler and Norman.