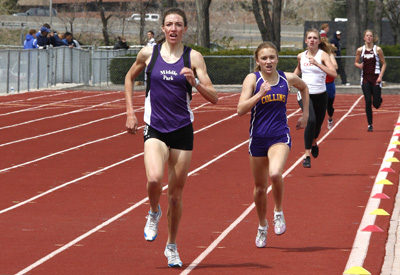 Sam Berggren draws upon her 400 speed to move past Erin Hooker on the finish straight of the 1600. Photo by Jeff McCoy.

And, that weather forecast was spot-on until about 10:30 AM. Temperatures hovered around 40. Light snow flurries accompanied by light to moderate breeezes dominated the early-morning hours. Coaches, athletes, and spectators alike dug through their bags for additional layers and braced for a long day of maintaining body temperature.

The early morning sprint and hurdle preliminaries, as well as the morning field event performances, languished.

And then began the unfolding of a glorious of springtime Saturday, one almost perfectly suited to a track meet.

Temperatures were still crawling toward 50 for the elite 3200s, and the assembled competitors took full advantage of the conditions.

In the girls' 3200, Shelby Stableford, Lauren Shomaker, and Sam Lewis traded off setting the pace for the first five laps, with lap splits averaging just over 86 seconds. At lap five, however, the tempo surged as Stableford went decisively to the lead, finishing the last three laps at an average pace of about 82 seconds per.

The excitement, however, was just beginning. It became clear very early in the boys' 3200 that Connor Winter was in the mood for something big. ThunderRidge's Keifer Johnson gave chase early but could not maintain the pace. Winter clocked through the 1600 at 4:30. At that point, a lot of us began doing some quick calculations. We reached the same conclusion: "Wait a minute, that's on pace to wipe out Brent Vaughn's 32 record!"

Laps six and seven were not quite fast enough, however. In spite of a strong last lap, Winter finished at 9:09.04. And, once again, Vaughn's record lives to taunt Colorado's best distance talent another day.

Following the 3200s, all that remained of the morning season was the 200 prelims. Those heats went pretty much according to form and, following a break of a half hour, the temperatures were nearing 60 under brilliant sunny skies.

All just in time for some Middle Park magic. We've grown accustomed to Sam Berggren lighting things up, but the first bolt of lightning came from a new name, a name we've barely heard before.

That name would be Sam Little. When Little posted the top time in the chilly 110 hurdle prelims, we raised our eyebrows, but passed it off as maybe just an artifact of the conditions. Maybe some of the "better" hurdlers were having an off day during the conditions or were holding back in anticipation of the finals. They don't award any points or places to the winner of the prelims.

Any excuses for an off day, however, evaporated in the abundant sunlight and near dead-calm conditions of the early afternoon. Little stepped on the gas and won the 110 hurdles finals in a time of 15.20 (-0.1), leaving notables like Arapahoe's Alex Jordan in his wake.

The buzz had barely settled when it was time for the girls 1600. The first lap of that event amounted to a pace lap. Nobody wanted the lead badly enough to become live bait for the rest of the field. At 500 meters, Erin Hooker tapped a finger on her wrist as if to ask the Fort Collins coaches about the pacing of the race. Whatever response she got, she interpreted is at "go harder." And Hooker went harder, quickly opening a big gap on the field.

By the end of the third lap, Hooker's lead had expanded to the point where the outcome of the race seemed a foregone conclusion. But there's no safe lead when Sam Berggren is running her first race of the day. Berggren staged a furious rally over the last 300 meters, overhauled Hooker with a little less than 100 meters to go, and finished in 5:16.00.

But the Panthers--or at least Little and Berggren--weren't done yet.

A quick scan of the morning's heat sheets left little doubt that the girls' 400 would be one of the top--if not the top--collections of talent in this event prior to the state meet. To size up the field, you need only know that Berggren was seeded in lane two. Taryn Phipps of Arapahoe was the top seed but, to the disappointment of many, was a scratch in the event. That, however, still left Jenna Pinto, Iris Hardarson, Dana Gaetani, and Olivia Anderson in the field.

And none of them had a prayer. Berggren's lead was firmly established coming off the final turn, and she only increased her lead down the finish straight, winning in 56.32, more than a full second ahead of second.

Following the 400 were the 4x100 relays. Then it was time to put hurdles back on the track. The last heat of the 300 hurdles pitted Sam Little against Alex Jordan once again. And, since Jordan owns the top time in the state in that event this spring, it seemed reasonable to think Jordan would exact some revenge in the longer event. However reasonable that expectation might have been, it bore no resemblance to the outcome.

Little blew through the set of hurdles to turn aside Jordan's bid by a tenth of a second, 39.56 to 39.66. It doesn't take a lot of imagination to pick a favorite for the 3A boys hurdle events at state.

If you know high school track, you know what event follows the 300 hurdles. That would be the 800. And it might be only Sam Berggren's second-best event.

Wherever it ranks on her personal scheme of proficiencies, the race was more thing of beauty on a beautiful afternoon. This time, Berggren allowed nobody to stake any early leads. It was wire-to-wire for Berggren, winning in 2:17.80.

Berggren and Little weren't the only stars shining for the Panthers. Quincey Pedersen finished second in the high jump and sixth in the triple jump. Cheyenne Hickox added an eighth in the 100 hurdles.

No, Middle Park didn't win the meet. Those honors went to a very solid Arapahoe boys' team and a rapidly emerging Fort Collins girls' team. But Middle Park did leave an impression on the larger schools in attendance at the meet. This is a team that belongs in any meet anywhere in the state.

Arapahoe, the team in the trendy black-on-black speedsuits, had a solid, though perhaps unspectacular, day in their own right. Event titles went to Stephanie Gerber (100 and 300 hurdles), Connor Winter (800 and 3200), plus the girls' sprint medley and boys' 4x400.

The Fort Collins girls, on the other hand, seemed intent on making this their season's coming out party. With the additions of Emily Elliott and Katie Weber, the team in purple suddenly has a lot more options. Event titles went to Monica Franco in the high jump and Rachael Rudel in the triple jump. The Lambkins' team score domination, however, will be difficult to duplicate at state unless they can transform a few of their mid-level points at this meet to equal or higher level points at state. But, at the very least, Fort Collins succeeded in giving the world of 5A girls a few new things to think about.

And, one last parting shot--it appears we were one dropped baton away from seeing a scorching 4x100 relay from the Mullen boys. Whatever Mullen lacks this year in across-the-board strength is made up for by the strength of their sprint group. If this group can get the baton around the track the rest of the season there are going to be a lot of teams too far back to read the "Mullen" on the back of their gold singlets.