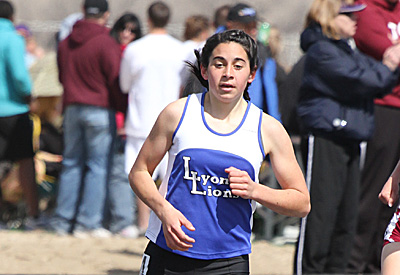 Note: The piece of analysis that follows is a submission to Colorado Track XC. I did not write it, and haven't had time to write it, but it strikes me as a good, quick analysis of the state of things in 2A girls. In the spirit of using any quality material I can get my hands on, I'm posting it. I hope those with an interest in 2A girls will find it entertaining and informative.  --Alan Versaw

For the last couple years Akron has had their way in terms of the girls 2A state title. Standouts like Holyoke's Marissa Smith would get their share of individual medals, but for the most part the team competition was reduced to who would secure the 2nd place trophy. While Akron still fields a strong team, it looks like any 3-peats will be harder to earn than the first two were.

Let's look at the top teams...

Sangre de Cristo's Kathryn New looks to be positioned to score points in the 200, 400, and the high jump. She'll get some help from Amber Reynolds in the 800 but Sangre de Cristo will need more than these two scoring at state to contend for a trophy this year.

Holyoke always seems to find some solid individual performers, and this year is no different. They'll certainly miss the pile of points that Marissa Smith managed to generate last year but look for Heather Duester to make some noise in the 200 and 400 as well as Marci Vasa in the triple jump. If their relays run well they can also expect some points in the 4x100, 4x400, and the sprint medley. Beyond that, however, the prospects for the Dragons aren't as evident at this point.

Limon is another school that seems to find some great athletes year in and year out. Just before Akron's most recent run, the Badgers had a serious run of state titles of their own. Caitlyn Hubbard is currently ranked in the top 4 in both the hurdle events as well as the high jump. She'll get some help from Keturah Tatum in the 300 hurdles and the triple jump, Marie Allen in the throwing events, and Breanna Stickels in the pole vault. Their 4x100 and 4x200m relays are well positioned going into the last couple weeks, so Limon looks to contend for one of the top 5 spots in the team competition.

Wray's Dani Lenz holds the top spot in the 2A discus rankings, but it doesn't look as if they'll be a factor in the team competition this year.

Sedgwick County's senior speedster Makenzie Ault looks to place well in the open 100m and is a key component of their 4x100m and 4x200m relays. If she jumps well, she could also pick up some points in the long jump. Makenzie gets help from Ashley Campbell in the discus and Erin Bell in the pole vault. Like many of the other schools, however, the numbers they have to draw from could be a limiting factor in the team competition.

Meeker's entire point production this year may rest on the shoulders of senior Kathryn Doll. Kathryn is ranked in the 100, 200, long jump, and triple jump. In the past it was possible for a standout athlete (Anyone remember Shaylee Robinette?) to single-handedly place a team in the top 5 (or higher) at the state track meet, but this year there's too much talent spread around.

Telluride has some real depth and looks to shake things up in the team competition. Rachel Hampton is a factor in the distance events holding top 6 rank in the 800m, 1600m, and 3200m. She also runs legs in their ranked 4x400m and 4x800m relays so there will be some decisions to make come state meet time. Lindsey Stindt and Emy Ludwig are going to score points in the hurdles and Josephine Bush can score in the long jump. Don't be too surprised to see Josephine in the 400m finals as well. Telluride has some athletes not currently ranked in the top 9 but with some good performances and a couple breaks they could score serious points in the team competition. This is definitely one of the teams to watch.

Paonia will be counting on the relays to score the bulk of their points this year holding ranked positions for the 4x200m, 4x400m, 4x800m, and sprint medley relays. There's an enormous logjam from 8th to 18th in the 4x100m and that's one of the relays where a bad handoff (or four great ones!) can mean the difference between moving through to the finals or not. Paonia also should get some production from individual performances by Lindsay Russell (400m), Chelsy Reed (800m), and Mandy Bushta (LJ).

If Paonia looks for a majority of their points from relays, Dolores will rise or fall on their relays. They hold ranked positions in all relays and hope to contend for the gold in the 4x100m. Cydney McHenry looks to do well in the 300 hurdles. The long jump separation from 8th to 18th place is only about 8 inches so keep an eye on sophomore jumpers Lexi Atkinson and Mindy McCracken who could move up the ranks quickly with a good jump.

Akron has been a 2A girls juggernaut for quite some time, and this year is no different. Always a force in the relays they look to maintain their strength in those events again this year. They hold top three ranking in every relay save the 4x100m (and given they have 3 girls ranked in the top 8 of the open 100m you wonder if they're not keeping their powder dry for that event as well). The team also enjoys a lot of individual performers this year as well. Allyson Vasquez has been tearing up the sprints but will have to make some decisions as to whether she'll run the individual events or the relays. In much the same situation are Ivanna Vance (100m), Sydney Clarkson (400m), and Shelby Guy (800m), although not to the same extent with each. Akron is strong in the field events as well with Ella Saunders and the Makenzi(e) twins holding down a places in the Discus and Shot. Akron has five vaulters currently qualified and could score a ton of points in that event alone. Sidney Merrill and Jordan Drum currently hold point getting ranks but Gail Hall, Ami Drum, and Jaryn Dreher could all conceivably finish in the points. Akron is going to score a ton of points and looks to compete for the top spot again this year.

Yuma doesn't have the depth or breadth this year to be contending for the team title but that won't stop the likes of Pyper Newton (400m) and Katie Crossland (PV) from being factors in their individual events. Yuma always seems to find 4 strong legs for the 4x800m relay and their team recently posted the second-ranked time in that event. Look for them to be slugging it out early in the meet to take that title home.

Cripple Creek-Victor looks a lot like Yuma in some respects--a threat to disrupt some expected orders of finish in a few critical events. Syndi Riley recently grabbed the #2 spot in the 400m and hopes to be running in the 200m finals on Friday as well. Katie Tapia is currently in the top tier of long jumpers. Just last week, the sprint medley team logged the third best time at the Kiowa Invite.

It's easy to look at the kind of season Rachel Hinker is having and miss seeing the depth and breadth of the Lyons team. Sisters Melissa and Miriam Roberts have the distance events covered. Sophomore Nola Basey will contribute in the high jump, triple jump, and key relay legs. Corbette Tschanz has quietly improved her pole vault all year and currently holds the top spot. Michelle Hickey not only contributes on the sprint relays, but has the 2A best shot put throw this year (when was the last time you saw a bona fide shot putting sprinter?). Olivia Raspotnik started the season slowly due to a basketball injury but she seems to have sorted that out and will be a factor in the high jump, 4x400m, and 4x800m relays. Like Akron, Lyons has a pile (four) of athletes qualified in the pole vault, and it's not inconceivable that the entire meet will hinge on the outcome of that one event. Lyons is second only to Akron when it comes to the relays.

In the final analysis Akron and Lyons look to be the teams who will be contending for the top spot. Both will need to make some decisions in terms of athletes choosing between individual events and relays so a static evaluation like a virtual meet simply doesn't capture the variables that will come into play at the state meet. These last two weeks of competition might result in one or both teams tipping their hands and letting on where key athletes will put their efforts at the state meet but my guess is that it will be a chess match all the way down to the submission deadline.

We are all looking forward to the state meet to see how it all comes out.