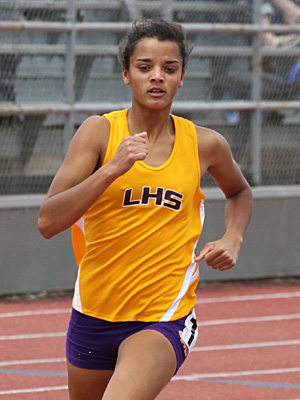 Kaela Edwards was at it again on Saturday, lowering her season-best 800 mark to 2:09.05. Photo by Alan Versaw.

It was a great meet for the heroes of the Hellenistic era. The Trojans (Fountain-Fort Carson) and the Spartans (Doherty) took top honors at Doherty's invitational.

For Fountain-Fort Carson, the outcome was never really in doubt. Doherty, however, had to turn back a challenge from the purple-and-yellow clad Littleton Lions. Before all was said and done, however, both teams made it clear that their state title hopes are intact.

For Fountain-Fort Carson, it was more of the same that we've seen all year. Markesh Woodson easily won both the 100 and 200. The 4x100 and 4x200 teams were dominating in 42.60 and 1:27.93. The 4x800 team completed eight laps in 8:05. And several other recognizable names--Quentin and Quinlan Riser, Trey Talley, Kordale Taylor, Dakota Leazer, and Solyde Bankston chipped in points along the way. 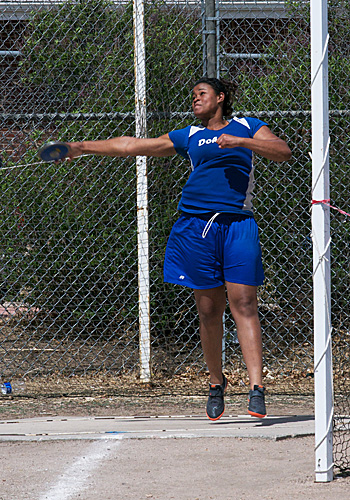 Doherty's route to the top was one less traveled, however. Kelsey English, though present at the meet and in uniform, was not part of the high jump competition. Jordan Rand turned over no sand in either the long or triple jump pits. About the only things having the appearance of normal about them were Margaret Hurst blasting out legs on the relays and winning the 100 hurdles and Alexis Cooks throwing heavy objects. And the 155-2 mark posted by Cooks in the discus (photo, left, by Paul Jaeger) may have been the mark of the day. Cooks added a 43-2.75 to finish second in that event.

There would, however, be at least one other mark in contention for the label of "best mark of the day." Kaela Edwards served notice it was going to be a big 800-meter effort when the split the first lap at about 60 seconds. Some people down on the field who were unfamiliar with Edwards' exploits earlier in the season smiled as if they expected Taps to play somewhere not far into the second lap. While Edwards "only" came back in 69, her 2:09.05 has her sitting at #6 in the nation as of Saturday evening. Tara Mendozza's all-time 800 meter mark is rumored to be spending a lot of sleepless nights lately. It's worth noting to Edwards' effort can only be construed as a solo effort. At no point in the race was anyone else in serious contention.

Littleton seemed content to focus on a few big marks this meet. In addition to Edwards' 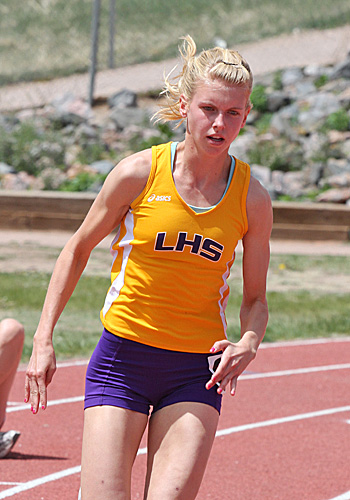 800, Iris Hardarson (photo, right, by Alan Versaw) dominated the 400 in 56.51. The Lions' 4x100 won in 49.03, and a 4x400 team running without anchor Dana Gaetani won in 3:51.17. Littleton had dreamed of taking care of a little record rewriting business until Gaetani's injury made it prudent to leave her off the relay. It seems reasonable to expect that Littleton will be aiming to spread the wealth around a little more in the next two weeks. Making a run at a state title takes precedence over setting records for most programs.

On the comeback circuit, Alamosa's Jenny DeSouchet finished second in the 1600 with a nice time of 5:20.24, but appeared to be a little fatigued in the 800, finishing in 2:28.92. TCA's Noelle Brown high jumped for the first time since last spring's state meet, winning the event at 5-2. 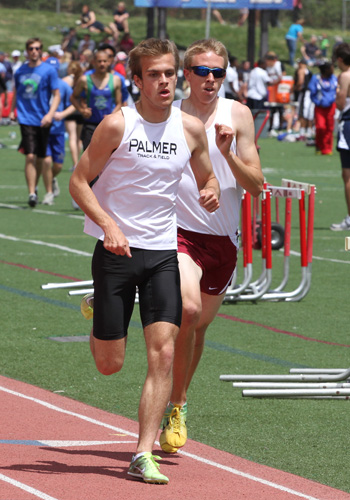 Although Palmer's prom was held on Friday night, Andrew Goodman (photo, left, by Alan Versaw) was feeling no visible ill effects as of Saturday afternoon. Chances are, however, he may be sleeping hard as I'm writing this. Goodman turned back a serious challenge from Josh Simkins to win the 1600 in 4:23.15. Goodman would complete his day by winning the 800 in 1:57.83. We hope the recovery period is brief for Palmer's middle distance ace.

Pueblo West's Mike Cernoia won the boys 3200 in 9:54.53, but the late afternoon heat and wind kept anything from reaching into the realm of spectacular in that event. Those contestants who weren't wearing socks suffered just a little as track temperatures were elavated enough to speed along the development of blisters. 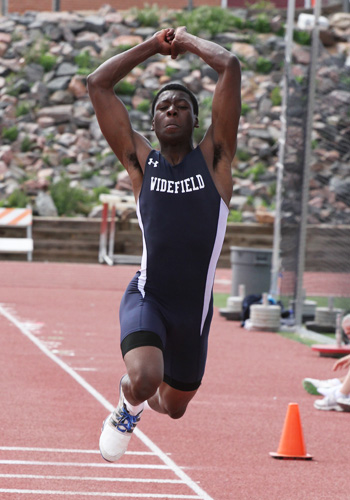 Widefield's Boris Berian cruised to a new Colorado season-best mark in the 400. Berian ran 47.58 to take leadership out of the hands of Nolan Mayhew who posted a 47.91 the night before in Longmont.

Pueblo South picked up a sweep of the throwing events with Brian Castellucci winning the discus with a throw of 151-3 and Kendal Medina winning the shot with a heave of 48-3.5.