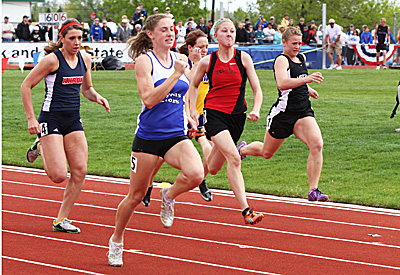 In recent years, Lyons has learned a lot about second-place trophies in running sports. Whether in track and field or cross country, Lyons has lived out the adage of "always a bridesmaid, never a bride."

Until Saturday, that is.

On the girls' side, Akron managed to keep it close until very late in the game, but Lyons picked up some key points late in the game that would eventually push them to a 14-point margin over Akron. For the boys, Wray put up a gallant effort, but the outcome never really seemed much in question.

Lyons got all of the expected points from Rachel Hinker. Hinker destroyed 2A state meet classification and state meet records en route to winning the 100 (12.05) and 200 (25.37). She also claimed the long jump title.

But, on Saturday afternoon, it was a couple of other girls who finally put the meet out of reach. That distinction would belong to Nola Basey who finished second in the high jump and triple jump, and Olivia Raspotnik who finished fourth in the high jump. It was precisely those 22 points that blew open a tight battle that had been playing out the entire weekend.

And, while Hinker posted a couple of nice records, Akron was busy revising the record board as well. Akron's 4x200 (1:45.29) and 4x400 (4:02.65) relays both set new meet records en route to first-place finishes. Sydney Clarkson didn't set a record in an individual event, but her 57.84 in the 400 finals was no less impressive for lack of a record. In all, six 2A girls dropped below 60.00 in the 400 finals. Does anyone seriously think the girls 400 isn't getting tougher in recent years?

The back-and-forth battle between Akron and Lyons was eptiomized in the pole vault where Sidney Merrill of Akron edged Corbette Tschanz of Lyons on misses. It simply was that kind of weekend between the 2A megapowers.

Elsewhere, Dolores got a place of their own--well, actually, more of a shared place--in the record books with their 50.37 in the 4x100. Nederland's Kelley Robinson completed her sweep of the distance titles for the school year by adding the 2A 1600 and 3200 titles to her cross country title from the fall. Teammate Rebecca Hermann won the 800. Caitlyn Hubbard of Limon swept the hurdle events.

Telluride finished a gallant, but distant, third in the team standings.

For the boys, Wray's 59 points were no match for the 88 posted by Lyons. In the final analysis, both Wray and Lyons had some spectacular performances but Lyons had more of them.

And the ultimate tipping point in favor of Lyons came early in Saturday's finals. Wray's Jarret Cure came into the 100 finals with the top time out of preliminaries, but slipped to fifth in the final. Meanwhile, Forrest Donnell of Lyons finished second. Wray would never recover from that swing of points in Lyons' favor.

And Lyons wasn't in a charitable mood so far as providing any new opportunities on Saturday afternoon was concerned. Ryan Boucher and Shaun Wicen finished 2-6 for Lyons in the 400 finals. Lyons dominated the 4x100. Forrest Donell won the long jump at 21-10. By the time that Wray's opportunity to write a new state meet record in the 4x400 (3:24.75) came around, Lyons had the state title wrapped up. That and, for good measure, Lyons finished second in the 4x400, meaning that Wray only closed two points on the Lions in the relay.

Third place would go to the Cougars of Burlington.

Daniel Weirich of Eads would win both throws titles. Chris Zirkle of Hayden outdueled Telluride's Ty Williams in both the 3200 and 1600. Zirkle's 9:28.69 in the 3200 would set a new state meet and classification record.

Another state meet record went to Paonia, which ran 43.11 in the 4x100 prelims, but a hamstring injury relegated the Eagles to third in finals.