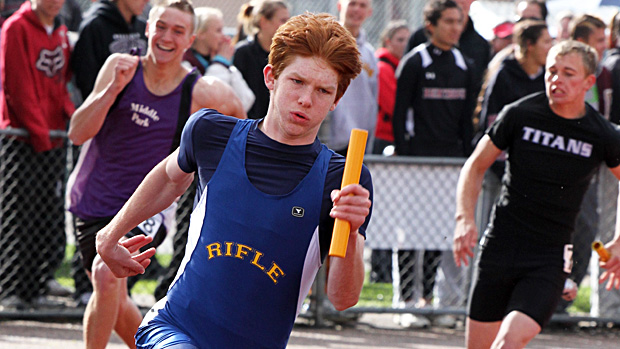 Make no mistake about it; Rifle's state championship last spring was a team effort. The effort that brought them to the top was spread across a lot of individuals.

But it would also be a huge mistake to think that Andrew Proebstle didn't play a key role in that triumph. On the season, Proebstle had personal best marks of 22.17 in the 200 and 48.91 in the 400. At state, he finished third in both the 200 and 400, and led Rifle to state titles in the 4x200 and 4x400. Not a bad showing when you stop to consider that prelims and finals for all four events got crammed into two days due to the lightning postponement of the Thursday session.

After a final hurrah in this spring's outdoor track and field season, Proebstle will be packing his bags for a long trip across most of the continent to Providence, Rhode Island. He plans to continue his education studying Computer Science and Mathematics at Brown University.

Since Brown is an Ivy League school, there are no athletic scholarships to be had. But, in Proebstle's book, that works out as a positive, "I'm accepted whether I do track and field or not. I could ... get injured at any time and my financial aid and status as a student wouldn't be affected. That takes a lot of pressure off of being an athlete, because I'm not bound to an athletic scholarship. I get to run for them because I want to run for them and because I enjoy the sport, not because I have to."

Proebstle isn't vacillating in his decision, "My reason for selecting Brown was because I fell in love with the school. I love the students, the athletes, the professors, the coaching staff, the campus, the city, the food--everything."

"When you go to college, you go in order to become a part of that college. It's a four-year commitment."

He has been warned, however, by Hunter Warwick (Palmer Ridge, class of 2011, and a current Brown student-athlete) that he will most likely miss the mountains of Colorado. But, even so, there is a trade-off, "At least I'll have the ocean."

It goes without saying that not just anyone gets admitted to an Ivy League school. But Proebstle has the credentials. Though it's not yet a done deal, he has a goal of graduating as valedictorian of his class at Rifle High School. Along the way, he's taking AP classes. The tests for those classes figure to add an additional element of challenge to what figures to be a very busy month of May.

What else in on the agenda for May?

"I'd like to win state again and hopefully break a few more school records." At the rate he's going, it may not be just school records he ends up breaking.

This year, however, will be different in many respects than last year. Last spring, Proebstle was coming to the starting with the best rivals any 3A 200/400 type could ever dream of--Zach and Taylor Browning of Roaring Fork. The Brownings have graduated, but aren't far from his mind, "Not only were they excellent competition and good motivation for me, but there were also wonderful people and good friends of mine."

The kind of friendly competition that can keep you honest every meet of the season is not to be taken lightly, but the the departure of the Brownings is far from the greatest challenge in Proebstle's mind.

"The real game changer this year is the loss of Coach Shafer. I trusted and respected him more than any other coach I've had, and that's a hard thing to replace."

Jerry Shafer was the head track coach at Rifle last spring but has since moved on. He was also the person who saw the potential (both academic and athletic) in Proebstle and made the suggestion that he look into applying to Brown University.

As Proebstle notes, it will undoubtedly be challenging, but this is a young man with a history of responding well to challenges. Look for big things from this young man this spring.