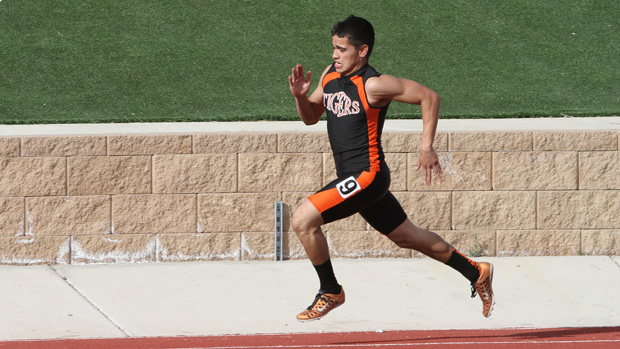 Joseph Jaramillo is part of the best sprint group La Junta has had in a good, long time. Tomorrow, the Tigers get to put on the show in front of the home crowd. Photo by Alan Versaw.

It's only a calm weekend in terms of participation, not in terms of performances. With allegedly gorgeous weather on tap for at least Saturday morning, nobody's feet figure to be stuck in concrete.

Actually, opening weekend of March 10 will probably end up being calmer in terms of the actual count of participants, but this weekend always feels like something of a hiccough in the life cycle of the season. Things have been pretty busy the last two weekends, but the second weekend of spring break for most schools in the state is definitely a lull in the action. And it is every single year.

Predictably, page views on this site are the lowest this week that they will be until after the state meet is over. People are gone; people are thinking of other things.

But, for those who hang around this week, the weekend still holds much promise. There is no vacuum of rankings meets this weekend, they're just smaller meets than they were last weekend, or the weekend before. That's not all bad, though. Given some of the sunburns I've seen the last two weekends, maybe a little less time out in the sun isn't such a bad idea.

That meet would be in Broomfield, where the fast-starting Eagles will be taking on all comers on their home track. All comers incluce: Monarch, Cherokee Trail, Greeley Central, Lakewood, Longmont, Loveland, Mullen, ThunderRidge and many more. Expect many of these teams to be bringing depleted rosters, but it's still difficult to imagine a much better assemblage of teams.

Also on Friday, the La Junta Open hosts just about everybody in southeastern Colorado at La Junta's nice new digs on the south side of town. Sierra Grande is also  coming over, which we hope means the opportunity for Robert Ryland to test out his speed against the La Junta sprint crew of Audie Fouracre, Joseph Jaramillo, and Zerek Jones. As an aside, early returns from La Junta suggest this might be the Tigers' best team in several years, so they should be anxious to hit the home track and try for a little domination.

Stocker Stadium will be a little less busy than last weekend, but not without a meet. This Friday, it's the Warrior Wild West Classic. That would be the Grand Junction Central breed of warrior. And it's mostly a larger school meet. All the Grand Junction schools (which have already completed the spring break fling thing) will be in attendance, plus Glenwood, Moffat County, Montezuma-Cortez, Rifle, Rangely, and Soroco. Two big names we haven't heard from much yet this season are Alfredo Lebron and Andrew Mansfield. Perhaps this will be the debut for one or both. Andrew Proebstle in another who has had a subdued season to date and may be waiting for another opportunity.

The Saturday meets sweep much of the span of the entire state.

Starting in western Colorado and heading east, Cedaredge is our first stop on the tour. This one figures to be a fairly big meet, as smaller school meets on the western slope go. Even Montrose and Eagle Valley are getting into the act on this one. Cedaredge has been looking very competitive thus far this season, for both boys and girls, and and opportunity to run, jump, and throw in front of the home crowd should be something eagerly anticipated by the Bruins. Telluride is scheduled to be at this one and the outings for the Miners thus far have been with what appears to be a partial roster. Maybe this time we see the full roster?

The next stop takes us to Center. You can think of this one as #1 in the San Luis Valley championship series. There should be a couple more in the series later in the spring with stops at Sangre de Cristo and Adams State. It looks as if the entire SLV will be there, plus a few schools from over the passes--John Mall, South Park, and Cotopaxi, to be specific. One has to wonder, though, how Sierra Grande might be splitting their squad between La Junta and Center.

Up north, the Foot of the Rockies meet is taking in whatever didn't get sucked up by Broomfield on Friday. They're also getting a good representation of Wyoming schools. Figure on this one as the second biggest meet of the weekend, but still a little smaller than last weekend's meet in the Fort.

While Fort Collins gets the big schools, the 3A crowd is heading to the west side of Greeley for the University Bulldog Invitational. Even a few bigger schools, like D'Evelyn, Roosevelt, and Windsor get in on this one. University is a certified 3A powerhouse these days, and they should get a good measure of their strength at this one against several of the teams inching toward powerhood status in 3A--schools like Middle Park, Frontier Academy, Holy Family, Platte Valley, and Estes Park. I'm somewhat puzzled by the presence of Gunnison on the list of registered teams for both this one and Cedaredge. Does Bob Howard really have that many young athletes out for track and field this spring? If so, keep an eye on Gunnison.

Slipping a ways down the Front Range, Florence will be hosting about 15 teams at Canon City's brand new facility. This will be the first rankings meet on the Canon City track and there are several of us anxious to give the track a proper initiation. I'm desperately hoping they didn't dig up the grass at Citizen Stadium when they put in the new track. The grass at Canon City was one of the nicest fields in the state, despite the fact that the track needed refurbishing in the worst possible way. Outside of Custer County and Crowley County, the entire meet will be made up of Pueblo, El Paso, and Fremont County schools. Colorado Track XC will be on site for this one.

And that leaves only the plains. Somewhat surprisingly, there are two meets competing for the plains crowds. The bigger of the two will take place in Burlington. It's a big list of small schools that will be in Burlington. Thus far, 31 schools have initiated the registration process for this meet. In terms of athlete participation, only Broomfield and Foot of the Rockies figure to be bigger affairs than Burlington, with University being very close to having the same numbers. If you can correctly place the schools of Liberty (and not the one in Colorado Springs!), Edison, Arickaree, McClave, Bethune, and Wiley on a blank Colorado map, you're probably headed to this meet. While you're there, keep an eye on Eads. The Eagles dropped a few hints last weekend that they might be a surprisingly good team this spring.

Finally, there's the Northeast Colorado Classic in Sterling. A similar geographical test awaits you if you think you're familiar with the schools headed to Sterling. Where is Prairie High School? Otis (it's not the place they make elevators, although I think there are still a few elevators in town)? Peetz? And Caliche? If you were at the state 6-man football championship in November, you probably know a lot about several of these schools.