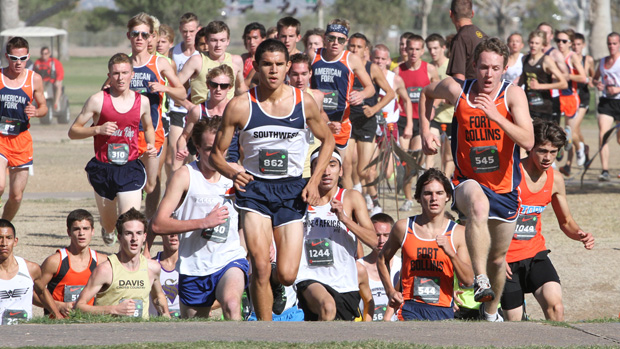 Great contests have been the trademark of the NXR-SW races. Expect nothing about that to change this year. Colorado Track XC file photo.

The girls had their turn a few days ago. We now turn our attention to prospects for the Nike Cross Regionals - Southwest boys contest. It's a region ripe for a little upheaval if a couple of teams continue to develop.

We'll follow the same procedure as with the girls, taking a look at what's happened over the last nine months with each of the top 10 teams, and then adding a few notes on teams that figure to have a great shot to climb into this year's top ten.

1. American Fork (Utah) - While the Cavemen have ruled NXR-SW for three years running now, their history at NXN has been one of frustration. A long pattern of that can either harden you or crush you. This year could tell a lot about the character of this team; they have great potential to go either way. The Cavemen graduated two big guns in Mackenzie Morrison and Clayton Young. They won't be easy to replace, but the first thing you need to understand about that boys cross country program at American Fork High School is that it is deep.  AF's JV regularly pounds on other teams when the varsity is resting. Brayden McClelland, Tyson Green, and Connor McMillan are back. There will likely be a lot of early season jockeying before postions four and five settle.

2. Davis (Utah) - Davis lost a couple of big guns to graduation as well in Brad Nye and Logan Wood. But, if there's a school in the region that's deeper in distance than American Fork, that school would be Davis. Davis had eight guys in the 26-man 5A 3200 field at the Utah State Track and Field Championship. Of those eight, only two graduated. It's difficult to make the picture much clearer than that. The leaders of the pack? That looks like Brayden Cromar, Preston Johnson, Alex Hedquist, and Andrew Aposhian. All you can do is stand back and marvel at what Coach Corbin Talley has done with this program in the last couple of years. It's too early to start venturing way out on limbs, but Davis looks to have surpassed American Fork on the basis of track results from this spring. AF, however, takes great pride in their cross country program, so this is likely to be a tussle at the top.

3. Fort Collins (Colorado) - Fort Collins will not be a sorry excuse for a team this fall, but losing your clear top four to graduation does have a way of forcing you into something of a rebuilding mode. Seth Knighton is the top returner, and he ran 16:36 on the Toka Sticks course last November. Fort Collins has a lot of work to do to get back to where they finished last year.

4. Mountain Vista (Colorado) - If they can fight off an impending challenge from Fairview, Mountain Vista looks like the preseason favorite to be the best team in Colorado. They lost two guys to graduation, but they have a very strong nucleus coming back, including the top sophomore at NXR-SW 2011 in Andrew Walton (15:48). Eric Steiner and Stephen Geisler add some strength and experience to this year's roster. Esprit de corps rides high at this school, so expect the Golden Eagles to build on last year's performance.

5. Cleveland (New Mexico) - The Storm has been rising on a very steep trajectory. If there's more of that steep trajectory left for this group, be fearful of what this team could become over the next three months. The top three of Luis Martinez, Aaron Flores, and Matt Smith are all back. And track results from last spring hint that the reinforcements behind the big three have shuffled in order a little with some newer faces making big gains. This program reminds me a lot of Davis two years ago, well-coached and anxious to prove something. That's a dangerous combination.

6. Mountain View (Utah) - Jaydn Asay and Alex Brown had big track seasons this spring and are back for their senior seasons this fall. It's a team definitely worth watching, though it's a substantial gap from where they finished last fall to even a #4 (where NXN consideration begins) finish in this group.

7. Fairview (Colorado) - Fairview finished seventh in this meet last year running five boys, and arguably not even their top five. You have to start somewhere. It's worth noting, however, that all five ran 16:42 or better in their first visit to NXR-SW. Kyle Lund, Rich Sanchez, and Bridger Tomlin appear to hold the keys for this group, but . It was a very young contingent last fall. They won't be as young, and likely won't be as few this fall. There's a lot of upward potential in this team. Be surprised if they don't improve on last year's finish.

8. Pine View (Utah) - The guys from St. George were hit pretty hard by graduation, losing three of their top four and not showing a lot of depth at last year's regional meet. It's going to be tough for PV to stay in the top 10 this fall. Michael Finch, last year's #2 is back, but he's going to needing the supporting cast around him to develop quickly.

9. Albuquerque Academy (New Mexico) - #9 at NXR-SW is unfamiliar territory for the Chargers. Albuquerque Academy's season fell apart a little late last year, though the ninth-place finish at NXR-SW was some measure of redemption over how their state season finished. Coach Kedge brings back a relatively young team, but also a team with a lot of promise. If you're dismissing this team lightly, you learned nothing from the first three years of NXR-SW. My hunch is that this team has passed through the leaner years in the cycle and could come storming back under guys like Ryan Lesansee and William Longenbaugh, though the latter will have some questions to answer after a silent track season in the spring.

10. Herriman (Utah) - The most important thing to know about this team is that all seven are back. The second most important thing to know is that track results from this spring indicate that a couple of those seven just might get bumped from the roster this fall. Led by senior Chuk Mitchell, Herriman could be very, very good this fall. They need more strength up front to join Mitchell and they need to spread their successes out over an entire season a little better than they did last fall, but this is a sleeper team in this year's race.

Other teams to watch:

Park City (Utah) - The depth may be a little thin here, we'll have to wait and see about that. But, Park City ran three guys under 10:00 this spring in the 3200, led by 9:01 Ben Saarel. Park City definitely has the horses up front needed to compete if they decide to make the trip down.

Los Alamos (New Mexico) - Like the girls, the Los Alamos boys seemed to be running on fumes at NXR-SW last November. They bring back a talented and experienced group, however. Led by Sean Reardon and Nick Hill, this group is very capable of climbing well into the top ten this fall. It appears that the Hilltoppers lose only one from last year's regional team. A lot of other teams wish they were in that position.

Ogden (Utah) - The Tigers deserve whatever attention they're getting. The girls program has risen faster than the boys, but the boys are on the cusp of being very competitive at a regional meet such as this. Led by Jordan Cross (15:29 last year at NXR-SW), Ogden has four guys returning who ran 10:06 or better in the 3200 this spring. The front guys are just a hair slower than Park City's, but this team appears to go deeper than Park City.

Desert Vista (Arizona) - The wheels came off the wagon about mid season last fall. Still, nobody in Arizona brings back the kind of talent that Desert Vista does. If they can keep the wagon rolling through the entire season, guys like Carter Macey and Ryan Dykstra have the potential to make this team very competitive in November.