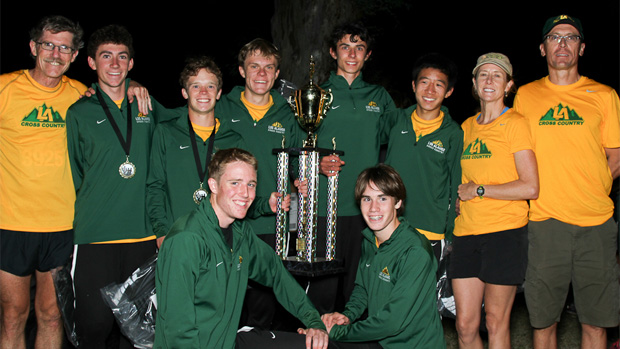 For those of you who couldn't quite keep up with all that was going on this last weekend, here's a quick snapshot. And there will be some rumblings to follow in the rankings later this week.

No, Oregon has not moved into the NXR-SW region, but they did host a few schools from the region over the weekend.

Nike Pre Nationals - Centennial (NV) traded in the heat of Las Vegas for the cool of Portland this weekend. Well, at least their boys did. They made the trip to Nike Pre Nationals. Running in the Division 1 race, they finished a very respectable second, getting top 20 finishes from Dajour Braxton and Jackson Carter in 16:16 and 16:20, respectively. This is one team we fully expect to see in Mesa in another seven weeks. Although I don't make the decisions on who is included in the championship race, they are piling up a nice set of credentials to state their case for inclusion in that race.

Regis Jesuit (girls) of Colorado finished sixth on the girls side in the Division 1 race. But, Colorado 5A appears to be much more competitive this year than the Nike Pre Nationals Division 1 race, so we'll let Regis Jesuit make their case in Colorado.

California's inclusion here figures much the same as Oregon's. Nike hasn't realigned any regions, but California was hosting some teams from the region.

Stanford Invitational - In the seeded girls race, two Colorado teams registered their case with the clerk of the court. Cherry Creek's girls finished a very solid third, while ThunderRidge ran to 12th. Consensus opinion has Cherry Creek currently pegged around the fifth-best team in Colorado, so this race gives a nice barometer on just how competitive Colorado is. And just as important, Cherry Creek was a very competitive third in Palo Alto, led by Jordyn Colter's 17:05 for third among individuals.

Cherry Creek's boys made their case by finishing sixth in the seeded race at this prestigious event.

A quick scan of the haystack of Stanford Invitational results reveals no other NXR-SW region teams making a strong bid for inclusion of their needle in the regional rankings. If I missed something, though, let me know, and I will own up to it.

The Nevada header figures as little more than a placeholder in this review. All of the upwardly mobile Nevada teams appear to have headed over the Sierra for their weekly fix of cross country.

Desert Twilight - Half of Arizona's running community was getting their preview of the NXR-SW course at Toka Sticks Golf Course on Friday night. And New Mexico's Los Alamos team left one indelible impression on them all--the Hilltoppers will be a team to account for come November 17. The Los Alamos boys didn't merely win; they crushed the field, rolled them around in the desert dirt a little, and then stomped on them. It was thorough. Their 98 points were 56 ahead of Great Oak (CA), and a whopping 111 points ahead of Desert Vista in third. DV is widely regarded as Arizona's best boys team.

The results on the girls side were, well, rather predictable. Xavier long ago stopped taking prisoners. On this night, they beat Great Oak, one of California's very best teams, 28 - 41. Far behind the two titans at the head of the pack were Highland and Mesa Mountain View. Los Alamos, arguably the best girls team in New Mexico, finished sixth in the cooler night air. Behind Los Alamos, the scoring gap was huge. Thus, nobody outside of the top six accumulates much in the way of credits from this race.

Highland's girls probably doubled the value of their stock with this performance. As for Xavier, they're doing all they need to to keep the investors happy. Nobody's going to get terribly shaken up and sell all their shares if the Gators continue winning as they have been.

A lot of the heavy hitters in Utah were idle this past weekend. Or at least their regular varsity runners were. But, if you've been following Utah cross country at all this fall, you could probably predict the one high-profile team without a home meet that was very much in action. That would be Herriman. Herriman follows the race-early-and-race-often plan. So far, it's working out pretty well for them.

Park City Invitational - This weekend, Herriman was up in the cooler air of Park City. And, once again, they put a whoopin on the field. Next up? Regionals.

On the girls side of the ledger, Park City continued their rebound from the struggles that plagued them earlier in September. The Miners ran well ahead of a good Skyline team for the meet title.

Westlake Invitational - Bingham's boys and American Fork's girls were solidly in control at Saratoga Springs on Friday. Yes, the American Fork boys were there, too, but not the regular varsity version of the Cavemen. I trust it doesn't need to be explained why that makes a difference. The AF girls don't get as many breaks from the schedule of racing as the boys do. Both plans seem to be working well this year. AF is clearly atop the boys mountain in Utah, and you can make a very good case that the girls figure as the #2 girls team in Utah this fall.

Bingham's girls were second to AF, but it wasn't an especially close second. It's difficult to be close to any team that nails down places 3 through 9. That, ladies and gentlemen, is a pack! Thirty seconds to span seven places.

This will take a while. There were four Colorado meets this weekend we need to talk about. We'll take them in order of size--biggest to smallest.

Dave Sanders Invitational - For anyone doubting the strength of the Mountain Vista boys based on last week's split squad loss to Coronado, there was nothing left to doubt this weekend. With a fully-loaded squad of Golden Eagles, Mountain Vista this time turned back Coronado 49 - 80. And Coronado's performance showed little, if any, of a letdown from last week's mountain-top performance. In fact, Coronado had the added bonus of running with an additional scorer who just came out from under the restrictions of Colorado's transfer rule.

For future reference, when double-checking Mountain Vista's performances, the names of their top guys go something like: Andrew Walton, Connor Weaver, Eric Steiner, Blake Graf, and Seth Parker. If more than a couple of those guys are missing, you're not seeing the real deal.

Arapahoe was a distant third, and time is running out for the Warriors to make a big statement.

On the girls side, it was a big, and easy win, for Mountain Vista. Fossil Ridge and Coronado placed and showed, respectively, but the gap behind first was substantial. So far, Mountain Vista has shown no tendencies to split up the top girls, and thus they have not created any of the confusion that the boys did last weekend.

Brooks/TCA Titan Thunder Invitational - The showdown we've been waiting for between a fully-loaded Pine Creek girls team and Fort Collins took place at this one. Fort Collins was in a surly mood and sent Pine Creek home with a new appreciation for just how strong Fort Collins is when they're fully invested in the race. Fort Collins took the win 38 - 50 (those scores were accumulated in a 20-team meet), while Erin Hooker dropped a 17:36 at this one, breaking her own course record by something on the order of 22 seconds.

The Classical Academy girls finished in the same order of magnitude of points as both Fort Collins and Pine Creek, showing their best signs of life thus far this season.

Among the boys, Fort Collins was an easy winner, but there were no other regionally ranked teams in the field.

Thornton Invitational - Make a mental note somewhere that this Thornton boys team is getting more competitive each week. Nobody was looking much at them at the beginning of the season, but if your head isn't starting to turn it could mean you've morphed into a statue. 3-4-6-7-13 is a nice team score at any meet of 18 teams.

Sweetheart Invitational - It's getting late in the game to be making a bid to climb the 5A totem pole and it's hard to say what a set of times that has everyone over 20 minutes on a traditionally slow course means, but Loveland's girls did have easily their best outing of the season on Friday. On top of that, they humbled a very good Thompson Valley team. Wedge in a little room for Loveland on your watch list. They need to verify this performance, but it does get them notice.

Meanwhile, Thompson Valley's boys, a traditionally solid team, had easily their best outing of the season as well. Add them to wait-and-see watch list status as well.

Pat Patten Invitational - It was a smaller meet, but a nice convergence for several key teams in attendance. On the boys side, Fairview came in as the consensus #2 among Colorado teams. The Knights did nothing to disappoint. Led by a tough-course 16:37 from Kyle Lund, Fairiview's 23-point margin of victory over Boulder was bigger than it seemed. This was an 11-team meet, and so team scores tended to stay low.

For the girls, Monarch shook off whatever lethargy they might have been feeling, finishing first with 34 points (to Fairview's 68) and a 15-second pack time for the top five. Right now, Fort Collins appears to hold the upper hand in Colorado, but it's way too soon to be counting out Monarch.

Albuquerque Academy Invitational - For those teams that opted against making the long trip to Desert Twilight, there was a big-deal meet at home in Albuquerque. Cleveland's boys came perilously close to wishing they'd stayed home from this one as well, as they turned aside host Albuquerque Academy by a too-thin margin of only five points. AA needs another performance like this to validate that their status really has returned to a par with Cleveland and Los Alamos, but this performance is definitely suggestive. And confidence can be a huge thing in cross country. Small school power Laguna-Acoma was a distant third in this one. That third means they're ahead of a lot of other very good teams in NM, but "distant" means they weren't really in the race with Cleveland and Albuquerque Academy this time around.
For the girls, it was another close loss for the Chargers, this time to Eldorado. The Eagles came out of this one with ruffled tail feathers and a narrow 49 - 53 victory. Cleveland and Volcano Vista were behind them, but with team totals roughly twice what the first two place teams posted.
Tweets by ColoradoTrackXC