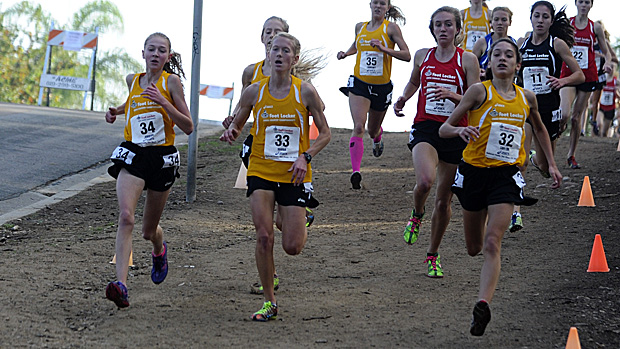 Jordyn Colter, Maria Hauger, and Taylor Werner lead the way down the hill on the first circuit of the course. Photo by Don Rich, Penn Track XC.

The road back was a short one for Jordyn Colter. From fourth at FLMW to fourth at FLN, Colter has resumed her standing among the nation's elite high school female distance runners.

Colter was in this race from the start. After California's Marissa Williams took an early lead that would last for no more than half a mile, she was swallowed up by an armada of five yellow-clad Midwest region runners.

And Colter was among the armada. Eventually, two of those five would drop off of the lead pack, but Colter hung on, sometimes taking the lead, sometimes hanging a stride or two off of the lead, but never out of contact. At the finish line, it went Midwest-Northeast-Midwest-Midwest, with Colter claiming the fourth position behind Anna Rohrer, Catarina Rocha, and Maria Hauger. Colter's time of 17:30 put her five seconds off of the winning time on the Balboa Park course. Rohrer and Colter are sophomores and may have another two years to perfect their art. Rocha and Hauger go on to the college ranks after this year.

Colorado's other entry in the race, senior Melanie Nun of Legacy High School, finished 35th with a time of 18:37.